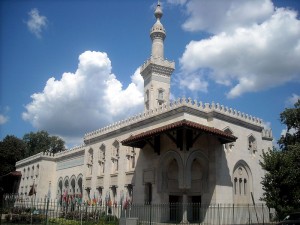 The Islamic Center of Washington is the unofficial national mosque of the United States.  Once the largest mosque in the New World, it has enjoyed a prominent role in the American Muslim community since the mid-20th century.  Moreover, it is the most important mosque in Washington DC from a diplomatic standpoint.  Many embassies from Muslim countries around the world contributed to the mosque’s construction, and it is frequented by both ambassadorial staff members and visiting heads of state.  In addition to the thousands of worshippers who pray here daily, the Islamic Center welcomes visitors, offering programs and information about Islamic religion and culture.

The United States government has a very long history of relations with the Islamic world.  The first country to recognize the sovereignty of the United States was the Kingdom of Morocco.  Because the United States was never involved in the colonization of the Middle East or North Africa, it was frequently the first Western nation that many Muslim countries established relations with in the post-war period.  By the late 1940’s, virtually every Islamic state, including many newly freed from colonial powers, had a diplomatic mission in Washington DC. 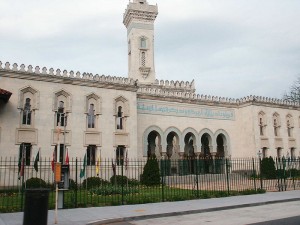 However, the Muslim community in America’s capital had virtually no religious institutions to speak of.  This was particularly evident after the death of a Turkish diplomat in 1944, when it was realized that there were no proper accommodations for the funeral.  Various Muslim embassies decided to sponsor a new mosque for use both by the international Islamic presence in Washington as well as by the local Muslim community.

The Islamic Center was completed in 1957.  The dedication was attended by President Eisenhower as well as religious leaders from around the country and ambassadors from around the world.  It has since been the defacto center of Islam in the United States, and is regularly attended by visiting heads of state from Muslim countries.  In 1977, the mosque was seized by extremist gunmen of the Hanafi movement, in part as a protest against a film about the life of Muhammad. 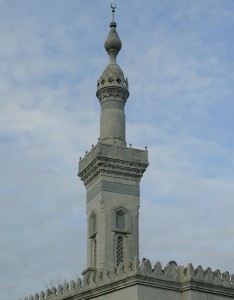 In the aftermath of the terrorist attacks of September 11, 2001, the Islamic Center of Washington became the backdrop for President Bush, who sought to assure American citizens that not all Muslims were terrorists, and to assure Muslims that they were welcome in the United States.  This helped to greatly defuse domestic tensions at a time of great anger.  Because of its diplomatic, political, religious and historical importance, the Islamic Center will likely remain one of Washington’s more interesting, off the beaten path sites for some time to come.

The Islamic Center of Washington is one of the largest non-Christian religious institutions in the American capital.  Although it no longer holds the record as the largest mosque in the Western Hemisphere, or even in America, it is still one of the most beautiful, and undoubtedly the most important.  Stylistically it is unlike anything in typical Islamic architecture.  In fact, it more resembles a typical early-20th century museum building than a mosque.  However, its most distinguishing feature is distinctly mosque-like: A towering minaret, square towards the bottom, rounded towards the top, strangely blending the styles of the Maghreb and the Arabian Peninsula.  In front of the mosque is a row of flags representing all of the Muslim countries that have a diplomatic presence in Washington.

The interior of the center consists of offices and educational facilities in the wings flanking the main entrance, and a massive prayer hall in the center towards the rear.  The prayer hall is arguably the most beautiful Muslim place of worship in the New World.  A soaring ceiling is supported by massive columns.  The walls are covered with spectacular mosaics and tilework.  Most of the interior structure and decorations were donated by various embassies.  Of particular note are the immense Persian carpets in the main prayer hall which were donated by Iran before the revolution.

The Islamic Center of Washington is located amidst the buildings of foreign diplomatic missions on embassy row, about two miles northwest of the city center.  As of this writing, no opening times were available.  There is no charge for admission.  Web: www.theislamiccenter.com (official website).