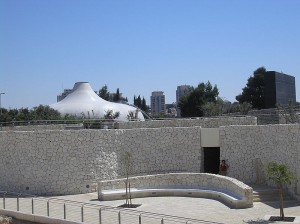 The Israel Museum is the national museum of the State of Israel and possibly the world’s greatest religious museum.  A sprawling world-class complex, no other museum in Israel, or perhaps in the entire Middle East (with the possible exception of the Egyptian Museum in Cairo) boasts so large or diverse a collection.  Designed to capture the immense, grandiose history of this ancient land and its people, it is home to an exceptional collection of Christian and Jewish artifacts.  Among its many exhibit galleries is the Shrine of the Book, which houses the greatest assortment of ancient Bible-related documents on the planet, including a large portion of the Dead Sea Scrolls.  Although primarily a Jewish site, few Jewish or Christian visitors to Jerusalem pass through without a stop at this magnificent museum.

It has been suggested that it is impossible to dig up a shovel full of dirt in the Holy Land without uncovering some ancient artifact or bit of archaeological ruin.  Although that might be a bit of an exaggeration, there is no denying the literally hundreds of thousands of pieces of history that have been uncovered here over the last two hundred years.  In the 19th and early 20th centuries, archaeological expeditions sponsored by governments and universities from around the world began to descend on the Holy Land and the rest of the Middle East, intent on uncovering the secrets and treasures of the Biblical world.

In 1925, James Henry Breasted, an archaeologist and professor at the University of Chicago, was visiting Palestine when he learned that there was no proper institution for the preservation, study, display and storage of the region’s antiquities.  Working with John D. Rockefeller Jr., who supplied substantial funds for the project, Breasted saw to the establishment of an archaeology museum in Jerusalem.  In 1938, the Palestine Archaeological Museum, also known as the Rockefeller Museum, was opened.  It became the official repository for many of the Holy Land’s greatest finds.  Since 1948, it has also been home to the Israel Department of Antiquities and Museums, now known as the Israel Antiquities Authority.

In the early 1960s, two developments necessitated the creation of a new institute of some sort to deal with Israel’s treasures.  The first reason was political.  Until the 1960s, the Rockefeller Museum had been run by an international trusteeship.  But the constant threat of war and the museum’s proximity to the Arab zone of control was cause for concern for the museum’s Jewish antiquities.  The Rockefeller Museum was, in fact, briefly occupied by Jordan in 1966.  The second reason was more practical.  Since the creation of the state of Israel, truckloads of new artifacts were turning up every year, more than the existing facilities could handle.

In 1965, it was decided that a new museum would be created: the Israel Museum, a massive new complex that could house and display the best pieces of the huge collection.  It would also expand on the Rockefeller Museum’s mandate and house exhibits on art and culture as well as archaeology and history.  The old Rockefeller Museum is now run by the Israel Museum, which since its inception has gone on to become one of the most popular museums in the entire Middle East.

The Israel Museum is a sprawling, Lego-like structure that occupies a twenty-acre site near the Knesset Building in West Jerusalem.  A masterpiece of modern architecture, both its exterior and interior are adorned with works of modern art.  The main museum building consists of two major permanent exhibit halls: archaeology and art; several smaller permanent exhibit halls, including the youth wing; and a number of temporary exhibit halls.  The museum’s archaeological collection includes pieces from all periods of Israel’s history, with a focus on Judaica, but with an enormous number of Christian artifacts as well.

The Israel Museum’s greatest Christian artifact is arguably the Pilate Stone.  This ancient limestone slab was recovered from the ruins of Caesarea Maritima, which was built by Herod the Great in the 1st century BC.  Engraved in Latin with the words ‘The Prefect of Judea, Pontius Pilate, erected the Tiberium to the August Gods’, it is the only absolutely authoritative contemporary mention of any New Testament figure in existence.  Another popular exhibit for Christian visitors is a spectacular scale model of Jerusalem during the Second Temple Period which was acquired in recent years from the Jerusalem Holy Land Hotel.  The highlight of the Israel Museum from a literary standpoint is the legendary Shrine of the Book.  Some of the greatest historical religious documents ever found are kept here.  The most famous of these are the Dead Sea Scrolls, a legacy of the Essene sect to which John the Baptist probably belonged.

The Israeli Museum is located in the more modern area of western Jerusalem not too far from the Knesset and Hebrew University.  At the time of this writing, the museum was undergoing a major renovation, so parts of the complex may be restricted or closed altogether.  Regular museum hours are Saturday, Sunday, Monday, Wednesday and Thursday 10:00am-5:00pm; Tuesday 4:00pm-9:00pm; and Friday 10:00am-2:00pm.  The cost of admission is NIS36 for adults, NIS18 for children.  Web: www.english.imjnet.org.il (official website)

Technically speaking, the Rockefeller Museum is part of the Israel Museum, and a shuttle bus runs between the two.  It houses additional archaeological exhibits, including some of the older collections.  Other major museums of Christian interest in Jerusalem include the Bible Museum and the somewhat controversial Third Temple Museum.