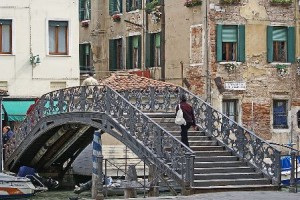 Venice was the commercial center of Europe in the late Middle Ages and in the early Renaissance.  Because of the city’s need for economic and mercantile expertise, as well for its need for go-betweens with the wealthy Islamic lands of the east, Jews were generally tolerated here and on occasion actively encouraged to relocate here.  Nevertheless, the lack of available land as well as the Christian population’s general discomfort of having so many wealthy Jews nearby led to the establishment of a segregated Jewish district.  This was the first true ghetto, the model for Jewish life that would soon be emulated in almost every major city of Europe.  The ghetto of Venice is still an active center of Jewish life and is something of a living museum for visitors to experience.  Venice is a UNESCO World Heritage Site.

The Jewish community of Venice was one of the most unique in Europe.  While never a major religious center of Judaism like Persia, Spain or Poland, Venice’s central geographical location and mercantile interests made it a primary center of Jewish economic life in the late Middle Ages.  Although there had been Jews in Venice since Roman times, it was not until the 1300s that they became an integral part of the Venetian populace.  Venice, which had established itself as the world trading and financial center during the Crusades, was naturally interested in the expertise of the Jews in these areas.  Because the practical Venetians tended to put economic interests ahead of religious ones, Jews were largely free to come and go.  More importantly, many Jews were permitted to settle there even when they were being purged from other places in Europe.  As a result, the Jews became an integral part of the financial success of Venice in the 14th and 15th centuries.

Things took a turn in the early 1500s.  As the Inquisition began to take root in the west, many Jews fleeing Spain and Portugal removed to Venice.  The predominantly Christian city did not look upon this development enthusiastically, and calls were made to purge the city of Jews.  Fortunately, the city’s leaders put economics above irrational prejudices.  The Jews were allowed to stay, but to appease the general citizenry, they were forced to reside in the Campo Gheto, or iron foundry district.  This later became the Gheto district, or simply the ‘Ghetto’.  Other than restrictions as to how and when they could come and go, the Jews of Venice were pretty much left to live in peace.

The Ghetto of Venice became something of an architectural and cultural wonder.  Despite an extension in the mid-16th century, the ghetto district remained densely populated and cramped.  As a result, the Jews built upwards, creating the world’s first high-rise district.  The synagogues of Venice, built with wealth from the city’s vast mercantile empire, were among the most beautiful of their day.  Unfortunately, the caricature of the greedy, calculating Jew also seems to have originated in Venice around this time, as emulated by the character Shylock in William Shakespeare’s The Merchant of Venice.

The Venetian Jews’ fortunes peaked in the 1500s.  During this time, Daniel Bomberg established the most important Hebrew printing press here, making Venice the chief center of Jewish publishing in Europe.  However, as the importance of the Venetian Republic waned, so too did the city’s Jewish community.  Unlike many other places where they were forced out, the Jewish population of Venice merely faded over the years, seeking greener economic pastures.  Few were still around by the 20th century, and fewer still returned alive from the Holocaust.  Only a couple of hundred Jews still live in the Venice Ghetto.  However, because it largely escaped the ravages of pogroms, wars and natural disasters, the Venice Ghetto is one of the best preserved Renaissance-era Jewish neighborhoods in Europe.

Despite its great age and relatively few remaining Jews, the Venice Ghetto remains surprisingly intact.  It is comprised of two areas, the Ghetto Vecchio, or old ghetto, and the Ghetto Nuovissimo, or new ghetto, which are surrounded by canals and accessible only by bridges.  The gates which once guarded the entrance to the ghetto were destroyed during the occupation of Venice by Napolean Bonaparte.

The Venice Ghetto is located on the north side of the city in the Cannaregio district.  The main square of the ghetto is an open site.  The synagogues may be visited on a guided tour, which must be arranged at the Jewish Museum.  The Jewish Museum is open October through May from 10:00am-4:30pm; and June through September from 10:00am-7:00pm.  Addmission is E8.00 for adults and E6.50 for children (includes the synagogue tour).  Web: www.ghetto.it (official website)

Venice was not the only city in northern Italy which benefited from Jewish financial expertise.  Florence also had an important Jewish community that actually flourished years after the Jews of Venice had faded.  The most important architectural legacy there is the Great Synagogue of Florence.  One of the largest in Italy, the Great Synagogue of Florence, whose builders had access to some of the great artistic masters of the Renaissance, is one of the most beautiful in Europe.