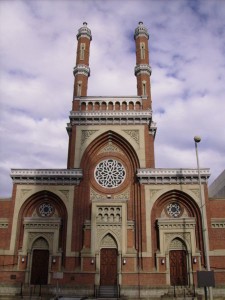 The City of Cincinnati was the location of the first major Jewish community in America outside of the original thirteen colonies, and features two of the ten oldest standing synagogues in the country, as well as one of the oldest and most important Jewish seminaries west of the Atlantic.  Together, the Shearith Israel Temple, Plum Street Temple and original campus of Hebrew Union College are the cultural cornerstones of one of the most historic Jewish communities in the United States.

Jews began to migrate to the burgeoning city of Cincinnati in the mid-19th century.  Thanks to its prime position on the Ohio River, Cincinatti became an important center of trade on the American frontier, and many Jewish merchants were attracted to the area.  By the time of the American Civil War, the Jewish community of Cincinnati was the largest in the Midwest. 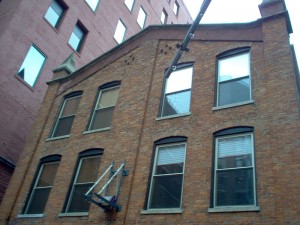 In 1860, the Shearith Israel Temple was founded.  Although it was only an active synagogue until 1882, it set and maintains to the this day several important distinctions: it is the oldest synagogue west of the Alleghany Mountains and the seventh oldest synagogue in the United States, as well as the fourth oldest building in the city of Cincinnati.  Later used as a warehouse and machine shop, Shearith Israel Temple was nearly torn down before being recognized for its historic importance.

The Plum Street Temple was built a few years later, just after the Civil War.  Located on one of Cincinnati’s most impotrant thoroughfares, which is home to several major prestigious religious institutions, the Plum Street Temple was deemed to be one of the most magnificent buildings in the city at the time of its completion.  It was recently renamed the Isaac M. Wise Temple in honor of its founder. 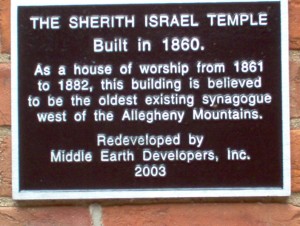 Isaac M. Wise was one of the most important rabbis in American history.  Integral to the establishment of Reform Judaism in the United States, Wise founded Hebrew Union College, arguably the second most important Jewish seminary in the United States after the Jewish Theological Seminary in New York.  Hebrew Union College remains to this day one of the world’s most prestigious training facilities for Reform Jewish leaders.

The beautiful old Shearith Israel Temple was saved from the wrecking ball in the 1990s.  Unfortunately, no longer in use as a synagogue, it now houses condominiums.  However, a commemorative plaque on the outside wall notes the building’s historic importance.  The Isaac M. Wise Temple has a spectacular edifice evoking traditional Eastern European and Moorish design elements.  The extravagant interior features columned arches and mosaics evocative of the famous synagogues of Spain.

The campus of Hebrew Union College has become a mecca for both theological students as well as for Reform Jews interested in history.  A traditional American-style college campus, the highlight from a visitor standpoint is the Skirball Museum with exhibits on archaeology, Judaism in America, Israel and the Holocaust.

The Isaac M. Wise Temple is located in downtown Cincinnati, and Hebrew Union College is located in Burnet Woods approximately two miles to the north.  As of this writing no visitor information was available for these sites. The Shearith Israel Temple, also downtown, is closed to visitors except residents, though the outside can be viewed.  Web: www.wisetemple.org (official website of Isaac M. Wise Temple) and www.huc.edu (official website of Hebrew Union College).