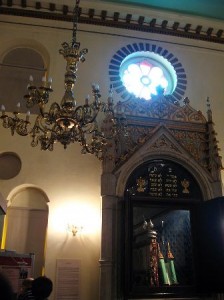 Synagogue Interior of the Jewish Museum of Istanbul (wikipedia.com)

The Jewish community of Istanbul is the largest in the Middle East outside of Israel.  Although Turkey’s Jewish population has dwindled from half a million to less than twenty thousand in the past century, it is still the most important and influential Jewish community in a Muslim-majority state.  There are many synagogues still active in Turkey, including nearly two-dozen in Istanbul alone.  One of these, the Zulfaris Synagogue, houses the Jewish Museum of Turkey, another institution unique in the Muslim world.  Despite its small size, the Jewish community of Istanbul is vibrant and a refreshing experience for Jewish visitors to the Middle East.  The Jewish Museum is part of the Historic Areas of Istanbul UNESCO World Heritage Site.

The history of the Jews in Asia Minor was virtually unique in history in that it was, for the most part, uneventful.  A bit boring, perhaps, but nowhere in the world were the Jews, in large numbers at least, less persecuted than in the heartland cities of Anatolia.  Jews began migrating into Asia Minor in the 4th century BC around the time when most of the Eastern Mediterranean region was united under Alexander the Great.  Based on archaeological evidence as well as writings of the New Testament, Jewish communities existed in Ephesus, Konya, Sardis and other cities as early as Roman times.  It was here more than any other place outside of Syria and Palestine that Jews and Christians vied for religious supremacy in the 1st, 2nd and 3rd centuries.

When Christianity prevailed in the 4th century, there were some efforts to convert or evict the Jews of Asia Minor.  However, while many Jews fled from Constantinople and the European territories of Byzantium around this time, the Jews of inner Anatolia were largely unaffected.  Apparently, by the time Rome was sacked in 476 AD, the Byzantine Emperors and Patriarchs gave little if any thought to the Jews in Asia Minor, being extremely preoccupied with other matters.  For the next thousand years, the Jewish communities of Turkey remained relatively undisturbed, even during the Crusader period.

In the centuries following the crusades, the cities of central Anatolia fell one-by-one to the expanding Ottoman Empire.  The relative tolerance that these Jewish communities enjoyed under the Byzantines continued under the Ottomans.  Even more than the Byzantines, the Ottomans recognized and appreciated the economic benefits of having a wealthy and stable Jewish population, and Jewish immigration was encouraged.  This was especially true in the wake of the Spanish and Portuguese Inquisitions, when huge numbers of Sephardic Jews were resettled in Istanbul, Thessalonika and other major cities of the Ottoman Empire.

In the entire history of the Diaspora, no other realm was as sympathetic to the idea of the restoration of a Jewish state in Palestine as were the Ottomans.  The Ottomans allowed many Jews to resettle in Palestine in the 16th and 17th centuries, but these efforts failed to bring about a long-term permanent state.  The Jews remained an important cultural component of life in Turkey up until the 20th century, when under the Republic they suffered persecution and forced deportation for the first time.  Nevertheless Turkey is one of the most Jewish-friendly countries in the Islamic world.  Turkey was the first Muslim-majority nation to recognize the state of Israel, and although less than twenty thousand Jews now live there, it is still the largest Jewish population of any country in the Islamic world.

The synagogues of Istanbul are many and varied, representing the styles and periods of Jews from all over Europe.  Most date from the 19th and 20th centuries, though a few are older.  The oldest and most famous is arguably the Ahrida Synagogue, which was built in the 15th century.  It is located in the Old Jewish Quarter of Istanbul’s Golden Horn district.  It is famous for having been a location where Sabbatai Zevi, a popular Jewish messianic figure of the Renaissance, preached.

The 17th century Zulfaris Synagogue is now home to the Jewish Museum of Turkey.  Restored and remodeled in the 1990s, the Zulfaris is once again one of Istanbul’s most beautiful Jewish landmarks.  The museum houses exhibits and artifacts relating the history of the Jews in Turkey.  There are also memorial exhibits commemorating Jews who have fought for Turkey during World War I as well as for Turkish Jews who died in the Holocaust.

Many of Istanbul’s Synagogues can be visited, though opening times vary and often must be arranged in advance.  The Jewish Museum of Turkey is located close to the northern end of the Galata Bridge, just across from the city’s fabled ‘Golden Horn’.  It is open Mondays through Thursdays from 10:00am-4:00pm; and Fridays & Sundays from 10:00am-2:00pm.  The cost of admission is $2.20.  Web: www.muze500.com (official website)

It is difficult to choose the best of Istanbul’s synagogues, but among the highlights are Neve Shalom Synagogue, the Ashkenazi Synagogue, the Italian Synagogue and the Bet Yaakov Synagogue.  The city of Izmir, formally Smyrna, is also home to a sizeable Jewish community and nearly a dozen synagogues of its own.  Just outside of Izmir can be found the ruins of the Sardis Synagogue, one of the best preserved Roman-era synagogues in the world.  The 13th-century Etz Ahayim Synagogue in the city of Bursa is the oldest synagogue still in active use in Turkey.