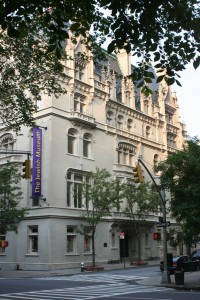 The Jewish Museum of New York is the oldest and largest institution of its kind in the world.  Founded in the early years of the 20th century, it became the prototype on which hundreds of future Jewish museums around the world would be modeled.  An integral part of New York City’s famous museum mile, this century-old collection boasts well over twenty thousand artifacts and pieces of art from thousands of years of Jewish history.  No other Jewish museum, or any other ethnic museum for that matter, in the world comes close to the size and scope of this New York Institution.  It is unquestionably the most visited site of Jewish interest in the United States, and probably one of the most visited in the world.

Prior to the 20th century, there was virtually no such thing as an ethnically oriented museum, Jewish or otherwise.  While some museums might have exhibits of an anthropological nature, there was not a major museum in the world at that time devoted solely to the entire history and culure of a single people.  That changed in 1904 when Mayer Sulzberger, a prominent Jewish citizen of New York, donated twenty-six pieces of Jewish artwork to the Jewish Theological Seminary with the idea that it might one day form the basis for a future museum collection.

The idea did indeed catch on, and in the decades leading up to World War II, the collection grew rapidly.  Donated items and other acquisitions rolled in, and by the 1940s it had become too large for the Seminary.  In 1944, Frieda Warburg, a wealthy and philanthropic member of the New York Jewish community as well as a trustee of the seminary, donated a mansion at the corner of Fifth Avenue and 92nd Street.  The collection was moved to the new site a few years later, and the museum has remained there to the present day.

Almost from its inception, the Jewish Museum has been a work in progress, with its focus occasionally shifting between history, art, culture and archaeology.  The museum has grown in leaps and bounds, adding on average between two and three hundred pieces to its collection every year, with new acquisitions reflecting changing trends in the museum’s focus.  The expansion of the collections has been matched several times by the expansion of the museum itself, including substantial increases of space in 1963 and 1993.

In the years following the Holocaust, the importance of the Jewish Museum of New York took on a new urgency.  The realization that European Judaism had been brought to the brink of total annhilation led to the ideas that 1) it was of critical importance to more aggressively protect Jewish culture and heritage, and 2) every effort should be made to educate Jews and non-Jews alike about the dangers of Anti-Semitism.  Jews around the world looked to New York for inspiration and guidance.  In the second half of the 20th century, Jewish museums proliferated around the world at a dizzying rate.  There are now well over a hundred such museums, from Rio de Janeiro to Istanbul to Sydney.

The Jewish Museum of New York is housed in the Warburg Mansion, a neo-gothic style building that was popular at the turn of the century.  Subsequent additions to the museum maintained the style so as not to upset the architectural integrity of the original building or the neighborhood.  The Jewish Museum’s primary permanent exhibit is “Culture and Continuity: The Jewish Journey”.  This exhibit, which displays over eight hundred pieces from the museum’s permanent collection, traces thousands of years of Jewish history and culture.

The majority of the museum’s galleries are set aside for the display of temporary exhibits.  These generally run for several months, though a few have lasted longer.  In the past these temporary exhibits have featured pieces from the museum’s collection as well as traveling collections.  Common themes usually revolve around historical periods and events from Jewish history, and at any given time there is likely to be an exhibit related to the Holocaust.  Other popular exhibits are the rotating displays of the museum’s extensive art collection.

The Jewish Museum of New York is located on the Upper East Side of Manhattan across from Central Park on the stretch of Fifth Avenue that is known as ‘Museum Mile’.  It is open Saturdays through Thursdays from 11:00am-5:45pm (late hours on Thursdays; closed on Fridays).  The cost of admission is $12 for adults.  Children are free.  Web: http://www.thejewishmuseum.org/ (official website)

Amazingly, as if the world’s largest Jewish Museum outside of Israel wasn’t enough, New York boasts at least four other institutions with major collections of Jewish artifacts and documents, though mostly the latter.  The American Jewish Historical Society and the Yivo Institute for Jewish Research located on 16th Street in Manhattan boast their own impressive collection of Judaica.  The Dorot Jewish Collection can be found at the New York Public Library.  Finally there is the Jewish Theological Seminary of America, which houses one of the best collections of ancient Jewish texts outside of the Shrine of the Book in Israel.