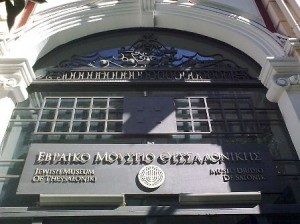 In the aftermath of the spectacular rise and collapse of Alexander the Great’s empire in the 4th century BC, Greek culture spread to every corner of the Eastern Mediterranean.  Over the next few hundred years many Jews became at least partially hellenized, in speech and culture, if not religion.  Long content to remain in their traditional homelands of Judea, Egypt and Mesopotamia, the Jews began to grow more interested in the wider world, of which they eventually became an integral part.  Led by early merchant-adventurers, the Jews soon began to spread out into all of the lands of the Greek-speaking world.

The first Jews probably arrived in Thessalonika a few decades before the Romans did, and by the 1st century BC boasted a thriving community.  The Ets Chaim, or Tree of Life, Synagogue was established around this time, and remained the center of Jewish life in the city for the next nineteen centuries.  The Jewish community in Thessalonika was certainly known to early Christians, and in fact the New Testament indicates that the synagogue was visited by the Christian disciple Paul during his missionary journeys.

Throughout the Roman and Byzantine periods, the Jews of Thessalonika maintained the longest continual Jewish community in continental Europe.  It was briefly interrupted only once, in the early years of Ottoman rule, when many of the Jews were forcibly resettled in Istanbul.  Bu not too much later, Jews from all over Europe began flooding back into Greece, seeking refuge from the inquisitions and persecutions sweeping the continent.  The Jewish population of Thessalonika soared, peaking in the 17th century, when Jews represented more than sixty percent of the city’s inhabitants.  This may have been the only time in history between the years 135 and 1948 in which a large European city had a majority Jewish population.

The fortunes of the Jews of Thessalonika rose and fell in the ensuing centuries, but the large community survived more or less intact until the 20th century.  The decline of the community began during the political upheavals of the 1800s, accelerated after most of the city’s Jewish quarter was destroyed in a terrible fire in 1917, and came to a terrible end during World War II.  Of the nearly one-hundred thousand Jews that lived in Thessalonika at the beginning of the century, only about three thousand survived the Holocaust.  Less than half of that number remain in the city to this day, a sad remnant of a once vibrant and resilient community.

Due to the 1917 fire and the German occupation of Greece during World War II, little remains of the ancient Jewish Quarter which had survived intact for so long.  Much of what is left there is now enshrined in the Jewish Museum of Thessalonika.  Located in the center of the city, the Jewish Museum is housed in one of the few Jewish buildings to have survived the 20th century disasters.

The museum’s various galleries include exhibits on the history of the Jews in Thessalonika as well as the Holocaust.  In addition, there are collections of photographs and artifacts documenting the Jewish community in the 19th and early 20th centuries, as well as a poignant collection of memorial stones from the old Jewish cemetery which was demolished to make way for new public projects.

The Jewish Museum is located close to the city center of Thessalonika, approximately a hundred and seventy miles north of Athens.  It is open daily (except Saturdays and Mondays) from 11:00am-2:00pm.  There are also extended hours on Wednesdays and Thursdays from 5:00pm-8:00pm.  Addmission to the museum is free.  Web: www.jmth.gr (official website)

Up until the 19th century, Thessalonika’s large Jewish community included a stunning collection of synagogues, buildings and monuments dating back hundreds of years.  Among the more interesting sites that have survived into modern times is the Monastir Synagogue, though this only dates to the beginning of the 20th century.  The Square of Jewish Martyrs commemorates those who died in the Holocaust.  A few older Jewish monuments of ancient Greece can be found in the city of Athens, including the ruins of a 5th century Synagogue which is distinguished by its menorah-shaped markings.