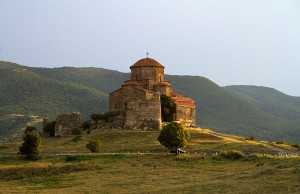 In the earliest centuries of Christianity, the Caucusus region represented the northeasternmost frontier of Christian missionary efforts.  The Eastern Orthodox Church did not grow much beyond the Black Sea, that expansion being largely undertaken by the Oriental and Assyrian churches.  Mtskheta, the capital of the region throughout most of the Roman period, stood on the frontier of the civilized lands to the south and the barbaric lands to the north. It wasn’t until the 4th century that the region began to be evangelized by St. Nino.  Her legacy and some of her personal affects have been preserved in the ancient Jvari Monastary, the holiest site in the Northern Caucasus region.  The monastery, as well as the Patriarchate headquarters of the Georgian Orthodox Church, makes Mtskheta the premier Christian destination in Georgia.  The Jvari Monastery is a UNESCO World Heritage Site.

The history of Christianity in Georgia, or Eastern Iberia as it was called in ancient times, is very similar to, and closely linked to, that of Armenia.  Because Armenia buffered Eastern Iberia from the Byzantine and Persian Empires, it is rarely remembered as an important or distinct political entity.  During the first century, the Roman Empire followed up its conquest of Armenia with an invasion of Eastern Iberia, but control of this far-flung province was nominal at best and frequently challenged both by insurrections as well as by Persian rivals.

Armenian and Syrian missionaries visited Eastern Iberia during the 3rd and 4th centuries, most notably Nino, Georgia’s patron saint.  By the 4th century, Eastern Iberia had a substantial, possibly majority, Christian population.  Fearful of Roman persecutions and of the growing power of the Sassanids, Eastern Iberia threw in its lot with the latter.  This proved to be a mistake, both because of Rome’s ultimate conversion to Christianity, and because of the Sassanid’s attempt to impose Zoroastrianism on the region.  Eastern Iberia spent the next three centuries getting batted around between the Byzantines and Sassanids, almost always throwing in its lot with the wrong side.

Eventually the whole thing was settled when Arab armies conquered the region in the 7th century.  Interestingly, as in Armenia, the Muslims never made a serious effort to impose Islam on the area.  Eastern Iberia nominally maintained a Christian monarch, and though the area was frequently overrun by Islamic armies, forced conversions were never imposed in earnest.  When the Ottoman Empire finally decided to persecute the Christians of the Caucasus, the people of Iberia were largely spared, thanks once more to the Armenian buffer.

Ironically, the long-independent Georgian Orthodox Church, one of the oldest on earth, faced its greatest threat in the 19th century, not by Islam, but by absorption into the Russian Orthodox Church.  However, despite serious efforts on the part of the Czars, this largely failed to materialize.  The Georgian Orthodox Church successfully survived both the Czarist period and the even more dangerous communist period, and did so with flying colors.  Georgia was the first Soviet Republic to enjoy free elections, and the people celebrated by flocking back to the holy sites of Mtskheta.

The Jvari Monastery, or Monastery of the Cross, is one of the oldest in the Caucasus.  It is believed to have been built on the spot where St. Nino established the area’s first mission, setting up a cross big enough so that the whole town could see it.  The current monastery dates back to around 600 AD, but the original building wasn’t much older.  The architecture of the monastery’s church is an almost fortress-like design that borrowed from the Byzantine style and which later served as a prototype for many of the churches and monasteries of the Caucasus.  Although the church is still standing, much of the outer monasterial compound is now a ruin.

The church interior, minimally lit by small window slits and candles, is somewhat dark and brooding.  The remains of the Cross of St. Nino were discovered when the earlier church was replaced, and have been on display here since the 7th century.  According to tradition, the tomb of St. Nino is believed to be located somewhere beneath the church.

The Jvari Monastery towers on a hill overlooking the city of Mtskheta, about fifteen miles northeast of Tbilisi.  Although not isolated, it is a bit of a distance from the city center.  As of this writing, no visitor information was available for the monastery.  Web: www.patriarchate.ge (official website of the Patriarchate of Georgia)

The Mtskheta-Tblisi region is home to a wealth of locally popular Christian sites.  Mtskheta is the headquarters of the Georgian Orthodox Patriarchate, as well as the Svetitskhoveli Cathedral, where many of Georgia’s medieval monarchs are buried.  The Anchiskhati Basilica of Mary is the oldest cathedral in Georgia and was a popular pilgrimage destination in the Middle Ages due to its possession of a sacred golden icon (now at a local museum).  The Metekhi Church of the Assumption was built on the site where St. Shushanik was buried and where St. Habo was martyred.  Also of interest in Georgia is the town of Kutaisi, home to the Bagrati Cathedral and the Gelati Monastery.