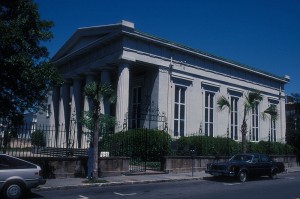 Because it has been overshadowed by New York City for so long, it is almost a forgotten fact that it was Charleston, South Carolina, and not New York, that was home to the dominant Jewish community in America throughout the Colonial and Antebellum periods.  While the first Jewish immigrants from Brazil instinctively made their way to other Dutch colonies such as New Holland, for the majority who followed them it was simply easier to get to Charleston, the largest and most important port in the south at the time.  The Jewish congregation of Charleston is one of the oldest in the United States, and its synagogue the second oldest still in use.

In the aftermath of the Portuguese conquest of northen Brazil in the mid 17th century, many of the Jews who fled made their way to other Dutch colonial territories, including the West Indies in the Caribbean and New Holland in North America.  However, even more travelled to the ports of Savannah and Charleston in the British colonies.  There are at least three reasons for this.  First, these colonies permitted religious freedoms that were expressly extended to the Jews.  Second, these colonies were more in need of Jewish expertise in matters of finance and trade.  Third, and possibly most important, is the simple fact that most ships from the Caribbean stopped in Savannah and Charleston, rather than New York, before making their way back to England.

It was the great philosopher and statesman John Locke who in 1669 personally prepared the colonial charter for South Carolina, expressly permitting Jews to live and worship freely there.  The first Jews to permanently settle in colony probably arrived about a decade later.  Throughout the colonial period the Jewish community of Charleston grew and thrived.  German Jewish immigrants began arriving in the mid-1700s, and soon the Jewish population of Charleston was so large that it was home to two congregations, including one Sephardic and one Ashkenazi.

Charleston’s was by far the largest Jewish community in the New World for the better part of a century and a half.  Many firsts took place here.  Charleston was home to the first Jews to serve in the military, both as soldiers and officers.  It was also home to some of America’s earliest Jewish public leaders, including the first Jewish elected official.  The Jews of Charleston strongly supported the cause of the patriots during the American Revolution, with a small, all-Jewish infantry corps fighting on the side of the rebels. By 1800, more than two thousand Jews resided in Charleston.

The Jewish community of Charleston reached its peak in the 1820s, after which it was finally surpassed in size and importance by that of New York.  This process only accelerated after the Civil War.  However, the Jews of Charleston remained very influential.  It was in Charleston, not New York, where the Reform Jewish movement first took root.  One of the important reforms of this period was the introduction of English into the worship sevices.  Today Charleston remains the spiritual heart of Judaism in the old American south (if you don’t count Florida), and its synagogue an important regional architectural treasure.

The Congregation Kahal Kadosh Beth Elohim was founded in the 1740s.  Their current synagogue dates from 1840, making it the second oldest synagogue still in active use in America.  Built in a neoclassical format that was popular in the American south at the time, the colonnaded facade of this edifice could easily pass for that of an ancient Greek temple.

The synagogue interior layout and design is more in line with traditional religious architecture of the period, such as what might have been used in neighboring churches.  The centerpiece and focal point, of course, is the magnificent ark.  An 18th century Jewish cemetery adjoins the site.

The Congregation Kahal Kadosh Beth Elohim Synagogue is located in the historic district of Charleston, approximately two-hundred and eighty miles east of Atlanta on the Atlantic coast.  The synagogue is open on weekdays for visitors from 10:00am-noon.  Worship services are held at 8:00pm on Fridays and 11:00am on Saturdays.  There is no cost of admission.  Web: http://www.kkbe.org/ (official website)

Savannah, Georgia was the location of the other early mjor Jewish community in the American south, and it could easily have become the preeminent one had the Georgia government been a bit more welcoming.  Nevertheless, the Congregation Mickve Israel, founded in 1733, is still counted as the third oldest in the United States.