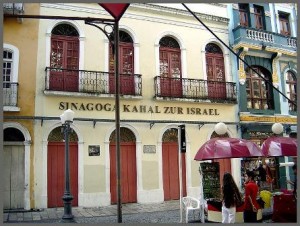 Brazil was home to both the first clandestine Jewish communites and the first openly Jewish communities in the New World.  The former arrived as refugees from Portugal at the beginning of the 16th century, the latter as colonists from the Netherlands at the beginning of the 17th century.  Brazil was the mother colony of Judaism in the Americas, and it was from here that the Jews eventually resettled to other locations in the Western Hemisphere, including New York City.  The Kahal Zur Israel Synagogue, the first built in the New World, was unfortunately torn down, but a Jewish museum now exists in the same location.  Because of the significance of the site, the museum is still put to occasional use for religious purposes, and is a popular location for Jewish weddings and other celebrations.

The history of the Jews in Brazil, and in the New World in general, began in 1500, the year of its discovery by Europeans.  The first Jewish person to arrive in Brazil was Gaspar de Gama.  Technically a Catholic, his conversion was forced on him by the Inquisition, and historians believe that he was a Converso and that he continued to practice Judaism in secret.  This was the case of many Jewish and Muslim converts of the period.  Distrusted by the Church, these New Christians were still persecuted by both religious and secular authorities.  One of the few safe places for them to go was to the New World, which was in desperate need of colonists.  There many of the Conversos continued to practice Judaism in secret.

Although things were generally better in Brazil for the underground Jews, the Inquisition did maintain a presence there, and religious persecution was still the order of the day.  Nevertheless, things were never so bad as in Europe, or in the Spanish colonies, and by the 17th century a sizeable portion of Brazil’s European population probably consisted of Jews.  Things improved considerably with the arrival of the tolerant Dutch, who conquered the northern half of Brazil in the early 1600s.  The Kahal Zur Israel Synagogue was constructed in the colonial capital at Recife at this time, and for the next few decades this became the center of Jewish life in the New World.

From 1630 to 1654 the Jews of Brazil thrived.  However, Portugal soon reconquered the territory, and the Inquisition returned, this time with a vengeance.  Persecution of Jews was redoubled, with all of the usual atrocities: forced conversions, seizure of property, and so on.  Some of the Jewish population fled at this time, seeking safety in other Dutch colonies, notably New Amsterdam, later New York.  However, the Jewish population of Brazil had grown substantial enough in some places that they managed to survive the period in reasonably good shape.

A hundred years later, Portugal formally ended religious persecution of non-Catholics.  Jews began to relocate to Brazil, not just from Portugal, but from other countries in Europe where anti-Semitism was still the order of the day.  Immigration peaked at the beginning of the 20th century before the World Wars.  Throughout its history, Recife remained the center of Judaism in Brazil.  In the late 20th century, archaeological research identified the former location of the city’s original synagogue.  Recife’s Jewish Museum now occupies a building which stands upon the site.  It is once again considered an important center of Brazilian Jewish life today.

The site where the Kahal Zur Israel Synagogue once stood was excavated around the turn of the century.  Archaeological investigations revealed the old building’s foundations as well as a ritual bath.  The local Jewish community constructed a new building on the site, to be used both as a museum and cultural center, as well as for religious purposes.  The current structure was completed and opened in 2001.

Architecturally the new Kahal Zur Israel Synagogue is reminiscent of styles dating back to the 18th and 19th century, though no one is certain what the original building looked like.  The museum houses a few small exhibits and shops on the lower level.  The upper level is a reconstruction of a typical 17th century synagogue interior, offering a glimpse of what the original synagogue might have looked like in its heyday.

The Kahal Zur Israel Synagogue is located on Bom Jesus Street (formerly the Street of the Jews) in the old section of the city of Recife, approximately a thousand miles northwest of the capital of Brasilia.  As of this writing, no official visitor information was available for this site.  Web: www.recife.com (official tourism website of Recife)

The Kahal Zur Israel Synagogue is located on the Rua dos Judeus, or the ‘Street of the Jews’, which forms the backbone of the old Recife Jewish Community.  Now also known ironically as Bom Jesus Street, it is home to traditional Jewish residences, shops and several old synagogues.  The history of the Jews in Brazil is more thoroughly explored at the Jewish Museum in Rio De Janeiro.