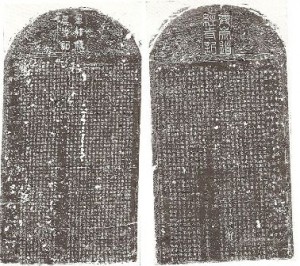 One of the most remote and mysterious Jewish communities in the world has always been that of Kaifeng, China.  Dating at least as far back as the 10th century AD, and possibly much farther, both the origins and subsequent history of the Jews of Kaifeng have been all but forgotten.  However, these little-known Jews left behind an interesting legacy in the form of a trio of stone monuments, or stelae, which document early Chinese Jewish lore and religious practices.  The stelae are unique in Judaism, and represent a fascinating blend of Chinese and Jewish art and literature.  It is only in very recent years that Jewish visitors to China have begun to rediscover this wonderful treasure.

The origin of the Jews of China is nearly impossible to nail down with any certitude.  According to some traditions, the first Jews arrived in the 3rd century BC.  These Jews would have been descendants of the Israelites who were displaced during the Assyrian Captivity, which would technically make them Israelites.  The authenticity of this belief, while possible and not unreasonable, has not effectively been proven.  What is known with certainty is that the Jewish community of China can be traced at least as far back as the late 1000’s.

The first known Jews in China were Radhanite merchants who came as traders operating out of their bases in the Khazar Empire.  Later, when the Khazar Empire collapsed, small groups of Jews migrated eastward and ultimately settled in the east, far away from the oppressions of their Christian and Muslim neighbors.  One of the Stelae of Kaifeng mentions the construction of a synagogue in China sometime around the year 1163 AD.

It is likely that another wave of Jewish settlers arrived in China around the 14th or 15th centuries, this time probably from Persia.  The exact relationship of this group of newcomers to the earlier Jews is unknown.  They might have merged with the older Jewish community, or formed an entirely new one if the earlier Jews were no longer a distinct ethnic group, which is highly possible.  Over the centuries, the Jewish community tended to grow smaller as the Jews intermarried with their neighbors.  However, as of the 19th century the surviving Jewish community still had their own synagogue and maintained many of their customs, including the prohibition against eating pork.

The Jews of China historically suffered little in the way of religious-oriented persecution, at least until 1850, when their synagogue was destroyed and the population temporarily dispersed.  Despite this, when the age of European empires opened up China to the west, new waves of Jewish immigrants began to arrive.  This activity peaked in the 1930s, when Shanghai became an important refuge for tens of thousands of Jews fleeing Europe.  Most of these Jews left China following the communist revolution there.  Nevertheless, a few Jewish communities remain, notably the ancient settlement at Kaifeng, and in recent decades have been rediscovering their heritage as China slowly opens up to the rest of the world.

The Kaifeng Museum is an important regional museum of Chinese history, culture, archaeology and art.  Its exhibits focus primarily on the Song Dynasty, of which Kaifeng was the capital city, from 960-1279 AD.  It was during this period that Jews became established in Kaifeng.

The museum’s Jewish collection is tiny, but consists of the museum’s greatest treasures: a trio of Stelae, or engraved stone monuments, that document Chinese Jewish life in the Middle Ages.  Although the stelae are very worn, there are rubbings displayed in the museum that make the writing clearer to read.  They have been dated to the years 1489, 1512 and 1663, respectively.  They document, among other things, the construction of an early synagogue in Kaifeng as well a list of the prophets from Abraham to Ezra.

The Kaifeng Museum close to the city center of Kaifeng, approximately three hundred and fifty miles south of Beijing.  The museum is open year-round from 8:30am-5:30pm (closed for lunch 11:30am-2:30pm).  The cost of admission is RMB10.00.  Web: www.chinahighlights.com/kaifeng (unofficial tourism website of Kaifeng)

While there are some Jews still living in Kaifeng today, there is little left of their ancient cultural and architectural heritage.  The city’s only synagogue was destroyed in the 19th century.  Most of what is left of Jewish interest is in the Kaifeng Museum.