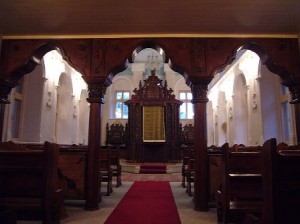 Sanctuary of the Kenesa of Yevpatoria (wikipedia.com)

The Kenesa, or synagogue, of Yevpatoria is the center of Karaite Judaism in the Crimea and the oldest active Karaite synagogue in the world.  The Karaites, a Jewish sect that originated in Persia, broke off from mainstream Judaism in the years following the arrival of Islam.  Strict followers of the Torah, the Karaites rejected the Talmud as unnecessary at best and illegitimate at worst, which put them at odds with mainstream Rabbinical teachings.  At their height the Karaites represented a significant portion of the Jewish population worldwide, but today fewer than one in five-hundred Jews are of Karaite descent. Most of these are concentrated in Israel, the United States and the Crimea in Ukraine.  Although the majority of Karaites now live in Israel, the Crimea and its kenesas are still revered as the sect’s spiritual center.

In the centuries leading up to the Great Revolt, two major factions vied for control of Jewish spiritual life: the Sadducees, who for all intents and purposes controlled both the Temple priesthood and the ruling council of the Sanhedrin; and the Pharisees, who dominated the synagogues and rabbinical circles.  While these two groups sometimes cooperated, they were often at odds with one another, particularly in the interpretation of religious law.  In the wake of the downfall of Jerusalem and the destruction of the Second Temple, the majority of the Sadducees were wiped out and their authority was all but destroyed.  The decentralized Pharisees fared much better, and the new religious life of Jews coalesced around the rabbis.

The Sadducees were not completely out of the picture, however.  In addition to those who survived in Judea, the Sadducees maintained a foothold in Mesopotamia.  But from a religious standpoint the rabbis were now the supreme authority.  It has been argued that these early Sadducees, themselves descended from important Levite familes in ancient times, did not take the loss of their former positions well; but the Jewish community at large rejected a return to priestly authority, which many considered to have become corrupt in the years leading up to the Great revolt.  Yet they continued to survive and assert their own views, rejecting the Talmud which was the cornerstone of rabbinical teaching.

With the coming of Islam, the descendents of the Sadducees saw their opportunity.  In the 9th century a Mesopotamian Jew, Anan ben David, started the Karaite movement, which means Readers of the Holy Scriptures, as opposed to Readers of the Talmud.  This movement appealed to the Sadducees and other splinter Jewish sects, who coelasced around the new group.  The Islamic religious leadership favored the new Karaite sect because it rejected rabbinical authority.  By the 10th century AD Karait Judaism was a major Jewish denomination, and may have been predominant for a time in the Persian and Khazar Empires.

The collapse of the Khazar Empire in the 10th century and the Mongol conquest of Persia and Mesopotamia in the 13th century dealt severe blows to the Karaite Jewish community from which it never really recovered.  With the Karaites largely wiped out in the Middle East, the center of Karaitism moved to the Crimea where the Khazars maintained their last outpost.  It was from here that the Karaites attempted to expand again, though feebly.  Most went northwards, only to be absorbed by other Jewish communities or disappear entirely.  A few small Karaite communities in Lithuania have managed to survive until the present day.  More than half of all Karaites in the world, which are believed to number no more than thirty thousand, now reside in Israel, where despite their doctrinal differences they are recognized as full-fledged Jews.

The Karaite house of worship is the Kenesa, an Arabic form of synagogue.  There are fewer than two-dozen traditional Kenesas left in the world, though there are some relatively new ones in Israel and the United States.  Karaite architecture is unique among Abrahamic religious design in that Kenesas are traditionally oriented in a north-south direction.  Karaite worship borrows heavily from Islam, requiring the removal of shoes and the use of prayer mats.

There are still a number of Kenesas that exist in the Crimea, but most of these no longer have a Karaite community and are maintained by the state only as memorial sites.  The largest and most important is the Kenesa of Yevpatoria, an early 20th century structure that is home to the major Karaite congregation in the Ukraine.  The oldest is the picturesque but abandoned Kenesa of Cufut Kale.  Cufut Kale is also homes to one of the oldest Karaite cemeteries.

The town of Yevpatoria is tucked away on the Crimean Peninsula, approximately thirty miles north of Sevastopol and over three hundred miles from Kiev.  As of this writing no visitor information was available.  Web: Not Available

There is still a lingering Karaite heritage in a few other places around the world, including a few new sites in Israel and America.  Among the more important are the Kenesas of Vilnius and Trakai in Lithuania; the Karaite Synagogue in Ashdod in Israel; and the Congregation Bnei Israel Synagogue in San Francisco, California.