According to Biblical tradition, Solomon was the wealthiest king in the history of ancient Israel.  While the true source of his riches almost certainly lay in Israel’s control of key trade routes in the region, hints in the Bible have led to the speculation that somewhere there existed a mine or mines which may have been a major source of Israel’s wealth.  This speculation was greatly exaggerated by the 19th 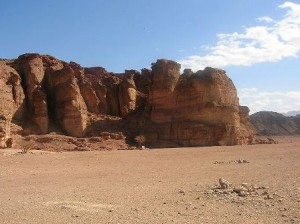 century novel King Solomon’s Mines by H. Rider Haggard, who suggested that Solomon’s gold came from rich veins of ore in southern Africa.  The truth is almost certainly less fanciful, and all evidence suggests that the main source of Solomon’s wealth was his copper mining operations in the extreme south of Israel.  Archaeological investigation in this area is still ongoing.

The discovery and use of copper was one of the defining moments in the history of humankind.  By the year 3000 BC, the manufacture of copper and bronze tools had become so pervasive and important in the Middle East that the new era was dubbed the Bronze Age.  Copper became one of the most valuable commodities in the ancient world, and control of copper mining was of geopolitical importance in the Middle East.  The main source of copper at the time was the copper mine belt which stretched from the Sinai Peninsula into what is today southern Jordan.

Copper mining in the area was first carried out either by the Egyptians, Midianites, Edomites or possibly all three.  The Israelites were certainly aware of the existence of this precious commodity, and it is likely that many worked as slaves in the copper mines of Sinai during their days in bondage in Egypt.  It is also probable that Israelite merchants were actively involved in the copper trade as early as the period of the Exodus.  In the days of the Judges, it was likely its access to copper that gave Judah the economic clout to become Israel’s preeminent tribe.

During the reigns of David and Solomon, the Israelites reached the pinnacle of their ancient political and military might.  Among their conquests of the period were all the lands southward to the Brook of Egypt, a line of control that extended from the Mediterranean Sea to the Gulf of Aqaba.  This gave the Israelites access to the lucrative sea-trade with the Arabian Peninsula.  It also gave them direct acess to the rich copper mines of the eastern Sinai.  At the height of Solomon’s reign, vast wealth flowed into Israel from the south, both from the mines and from trade.

The Israelite hegemony over the region ended soon after Solomon’s reign.  Vast territories in both the north and the south were either lost or abandoned after the division of the kingdom.  This included the region south of Judah which reverted to the control of the Egyptians, Midianites and Edomites, and Solomon’s mines passed from history into legend.  Fantastic stories have evolved placing the source of Solomon’s gold anywhere from Egypt to India to Zimbabwe and dozens of other places.  However, the copper of the Sinai, while more mundane by today’s standards, would have been just as lucrative in the days of Solomon’s kingdom.

The Timna Valley in the southern Negev Desert is the traditional center of copper production in southern Israel.  Like much of the surrounding region it is beautiful but rugged.  Sparsely populated even in the 20th century, Timna’s inhabitants have traditionally been either copper miners or traders/nomads passing through the area.  Much of the valley, including many sites where copper mining was prevelant in ancient times, has been incorporated into the Timna Valley National Park.

Among the park’s attractions is the Timna mine, thought to be the oldest known copper mine in the world.  First worked by the Midianites, it was still actively prospected until relatively recent times.  Much of the history of the site is recounted at the Mines of Time exhibit in the park’s visitor’s center, where interesting archaeological artifacts are also on display.

Timna Valley is extremely isolated, being located approximately fifteen miles north of the Red Sea port of Eilat and one-hundred and thirty miles south of Jerusalem.  It is run by the Israeli National Parks Service and is open daily from 8:00am-4:00pm (later closing hours in the summer, earlier closing hours on Fridays and before major holidays).  There are a number of different sites to see in the park, so the cost of admission varies.  Web: www.parktimna.co.il (official website of the park)

The modern day port city of Eilat, just across the border from the Jordanian port city of Aqaba, is located on the ancient site of Elath, the port established by Solomon.  The Ruins of Elath are currently being excavated.  For those who seek to find Solomon’s more mythical mines in southern Africa, Great Zimbabwe National Park, with the magnificent ruins of one of Africa’s greatest native civilizations, is the place to investigate.