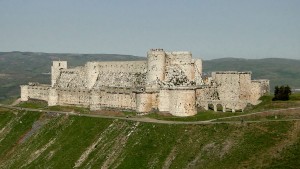 While Akko was the military headquarters of the Crusaders in the Holy Land, the Krak des Chevaliers was their greatest bastion.  This tremendous fortress, first built by the Kurds and then later rebuilt by the Crusaders, is arguably one of the greatest castles in the world.  It is certainly one of the greatest castles that survived the Middle Ages essentially intact until the present day, and is also the largest Medieval castle in the Middle East.  Because the siege that finally took the castle left it relatively undamaged, the Krak des Chevaliers preserves some of the most important Christian artwork and artifacts of the crusader period that can be found in the Middle East.  It is now one of the most visited sites in Syria.

It is unusual that the incredibly strategic site of the Krak des Chevaliers, located on a high point overlooking the Gap of Homs, stood devoid of military fortification for so much of its history.  It remained deserted for more than three hundred years after the arrival of Muslims in the area.  The importance of the site was not truly appreciated until the beginning of the 11th century, just before the Crusader invasions.  Finally around 1030 AD local Muslim rulers decided to construct a fortress on the site to guard the routes between Inner Syria and the Holy Land.  Unfortunately, the castle proved inadequate to oppose the vast armies pouring in from Europe.

The original Muslim fortification was seized early on during the First Crusade, but was not immediately considered to be of great strategic import to the crusaders, who soon turned their attention to Jerusalem.  It wasn’t until eleven years later, after the Crusader kingdoms were comfortably established, that people became interested in this site again.  It was occupied by Christian forces, and eventually passed under the control of the Knights Hospitallers.  During the tenancy of the Hospitallers, the old Kurdish fortifications were rebuilt and considerably strengthened into the massive citadel that would become known as the Krak des Chevaliers, or the Knight’s Fortress.  For many years afterwards the Krak served as the Hospitallers’ headquarters, and was frequently the home of the order’s headmaster.

As the early crusades ended, the Krak became the chief bulwark against Islamic counterattacks from the east.  Its position became even more important after the fall of Jerusalem.  Christian forces held the castle for over 160 years, and outlasted the Kingdom of Jerusalem by more than a century.  During this long period, the Hospitallers withstood many sieges, even against some of Islam’s most reknowned champions, including Nuradin in 1163 and Saladin in 1188.  Legend has it that Saladin retreated at the mere sight of the place.  However, the great fortress became increasingly isolated on the Syrian frontier, and by the late 13th century the garrison had shrunk from thousands to less than a hundred.  It finally fell to the Mamluks in 1271 AD.

After its fall, the Krak des Chevaliers was turned against the surviving pockets of Crusaders in the Holy Land.  It was from here that Muslim armies marched against Akko and put a final end to the Crusader states.  Afterwards the mighty fortress passed through a succession of Egyptian and Turkish rulers, ultimately coming under the dominion of the Ottomans, but was not again a major factor in the wars of the Levant.  It is for this reason and others that the castle remains in such excellent condition today.

T.E. Lawrence once called the Krak des Chevaliers the most admirable castle in the world.  Few medieval castles of such size and strength survive in the 21st century.  Perched majestically at the top of a steep-sloped hill, the massive double-concentric castle overlooks the old Crusader town and guards the road from the Mediterranean Coast.  The ten-foot thick outer walls are guarded by thirteen towers, and only a narrow causeway allows access to the main gate.  An unusual moat actually guards in the inner walls, which tower impressively over their outer counterparts. One of the features that distinguishes the Krak des Chevaliers and makes it so formidable is its lack of a significant courtyard.  The narrow space between the concentric walls is dominated by the moat, white the interior space of the inner walls is comprised almost entirely of a single, massive keep.

There are only a few major outbuildings in the space between the walls, including the castle stables and the great hall. The castle interior is remarkably well-preserved.  The great chambers and vaults have remained essentially as the Hospitallers left them.  Among the more interesting chambers are the armory, chapel, and latrines.  The castle’s latrines are among the most extensive in any existing castle, and for some reason comprise a wing of the long room which served as a dining chamber.  Latin artwork and inscriptions remain on many of the castle walls, untouched by the ravages of time and vengeful Turks.  And while the chapel of the castle was long ago converted to use as a mosque, the altar and some other Christian decorations still remain.

The Krak des Chevalier is located in West-Central Syria approximately 100 miles north of Damascus.  Although a popular and relatively accessible tourist destination in Syria, it is difficult for many travelers to visit due to the current state of unrest in the region.  The Castle is open to the public every day of the year except for public holidays (which vary annually).  From April to October the Castle is open from 9:00am-6:00pm; and from November to May from 9:00am-4:00pm.  Admission is SL300 (discounts for students).  Web: Not currently available due to ongoing problems in the region

The Crusaders were prolific castle builders, and they have left their legacy stamped in many places along the Levant.  The greatest of these after the Krak Des Chevaliers is Al Karak in Jordan.  Others include Margat Castle, the Chastel Blanc and the Crusader Castle of Petra.  There are also the magnificent ruins of Masyaf Castle, a fortress which dates back to the time of the Byzantine occupation of the area.