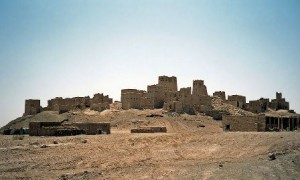 Of all of the foreign lands associated with ancient Israel, none are as mysterious or exotic as fabled Sheba.  From its location to its people to the numerous legends tying this realm to the Israelites, the riddles of Sheba have been slowly unraveling in the modern nations of Ethiopia and Yemen.  From Axum to Ma’rib, stories persist of the ancient frankincense trade routes; of the hiding place of the long lost Ark of the Covenant; and of ancient royal lines in Ethiopia which can be traced back to King Solomon.  All of these legends originate in the Biblical traditions concerning the Land of Sheba.  Today both Ethiopia and Yemen draw numerous archaeologists, academics and theologians who come in search of this ancient lost land.  Aksum is a UNESCO World Heritage Site.

Little is known about the origin or location of Sheba.  Linguists and other scholars have suggested that Sheba is the same as Saba, the land of the Sabaeans, which is located in the south of the Arabian Peninsula.  This would certainly be a logical location from an economic standpoint as it lay along the major frankincense trade route between Eastern Arabia and Canaan.  Ethiopia has an equally strong claim as Sheba’s homeland.  Strong historical, cultural and archaeological evidence suggests ties to Israel as early as the days of the Judges, including a Jewish presence that dates back as far as three thousand years.  So which one was the real Sheba?  Scholars increasingly believe that it was both, that Sheba was an empire which sprawled across both Southern Arabia and the Horn of Africa.

Sheba’s major appearance on the Biblical stage took place during the reign of Solomon sometime in the 10th century BC.  According to tradition, the Queen of Sheba, whose actual name is not mentioned in the Bible but who is believed to be a certain Queen Bilqis, heard of Solomon’s great kingdom, as well as his wisdom, and decided to make one of ancient history’s most famous state visits.  She brought with her great gifts of gold and spices and frankincense, a possible literary connection to the Three Magi, who may also have come from Sheba.  Some modern scholars suggest that her visit to Israel may have had more practical motivations, from the negotiation of trade pacts to a possible alliance against Egypt.

The Bible says little of Sheba after the departure of the queen, and that is where tradition takes over.  According to legend, Solomon and the Queen of Sheba’s relationship was more than friendly, and at the time of her departure she was pregnant with his child.  Her son, Menelik I, was the first Ethiopian ruler of the Solomnic Dynasty.  This legend is taken as gospel in Ethiopia and is even widely accepted among Jews.  If it is indeed true, than the line of David continued in Ethiopia until the beginning of the 20th century.  Over the course of those three thousand years, a direct descendent of Menelik always sat on the throne.  Imperial rule did not end until 1974, when Haile Selassie was deposed.  Nevertheless, a number of presumptive heirs still live, waiting in the wings to restore David’s heirs to power.

The bond between Israel and Sheba does not end there.  Another tradition, less verifiable but just as vehemently believed in Ethiopia, suggests that when the Queen of Sheba returned home, she brought the Ark of the Covenant with her.  According to this legend, Solomon was haunted by future visions of Jerusalem and the Temple laid waste by enemies.  In order to secure the Ark, he sent it away with her in the greatest of secrecy.  While there is nothing to validate this theory, two curious bits of history suggest that there may be something to the story: first is that the united kingdom of Israel broke up shortly after Solomon’s death, when the ark was removed; second is that the Ethiopian kingdom was never completely conquered by any enemy throughout the ensuing three thousand years, while the Ark was kept there.

Of all of the places which claim to be the true home of ancient Sheba, there are two strong contenders.  The first is Mar’ib in Yemen.  Mar’ib was the capital city of the Sabaeans for much of their early history.  The ruins of the old royal settlement there are just south of the current city.  Recent archaeological work has revealed that substantial construction took place in Ma’rib during the 9th and 8th centuries BC, less than a century after the Queen of Sheba would have returned.  One of the best preserved buildings in the ruins, the Bar’an Temple, is reminiscent of the architecture of the Holy Land during that period, suggesting the possibility that Israelite architects had a hand in the new buildings.

The other strong contender, with an even more colorful history, is Axum in Ethiopia.  Because of its ties to Solomon, Axum is considered the holiest city in Ethiopia both by Jews and Christians.  There are many Sheba related sites in and around the city.  A large archaeological site outside of modern Axum has revealed considerable construction from the period, including the Queen’s palace and a large field of stelae, or pillars, that are believed to have been erected by Jews.  The most sacred Jewish site, however, is actually located on the grounds of the Orthodox Church of St. Mary of Zion.  There, in a small, highly-guarded chapel, is one of the places that the Ark of the Covenant is supposedly kept, though many believe that it was returned to Israel in secret in the 1960s.

Ma’rib in Yemen is located approximately seventy miles east of the capital of San’a on the road to Oman.  While access to the site isn’t difficult, the roads in that area of Yemen have been targeted on occasion by bandits, so visitor caution should be exercised.  The ruins of Ma’rib are an open site.  There is no cost of admission.  Axum in Ethiopia is a little under four hundred miles north of Addis Ababa close to the border of Eritrea.  Although the stelae field is an open site, the treasury chapel of the Church of St. Mary where the Ark of the Covenant is supposedly kept is strictly off-limits.  As of this writing, no other visitor information was available for either location.  Web: www.yementourism.com (official tourism website of Yemen); www.tourismethiopia.org (official tourism website of Ethiopia)

Besides Axum and Mar’ib, several other places claim to be the home of the Queen of Sheba.  One is the city of Salalah in Oman, where the ruins of a Palace of the Queen of Sheba can be found.  Other sites can be found in modern day Sudan.  It is easily possible that all of these areas were part of a greater kingdom of Sheba that might have existed in Solomon’s day, and that all of the various palaces were built by her dynasty.