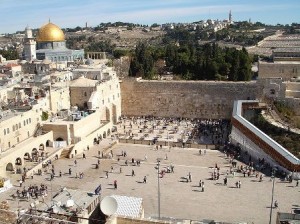 When most Jewish visitors to Jerusalem tour the city’s ancient sacred sites, it is generally not the legacy of David and Solomon that they are experiencing, but rather that of Herod the Great.  Herod, the most prolific builder in ancient Israel, spent vast sums remaking Jerusalem into a magnificent capital city.  The archaeological remains of his efforts can be found everywhere, in the form of palaces, houses, and public works.  But all of these pale in comparison to his reconstruction of the Great Temple, of which only the western retaining wall remains today.  This Western Wall, or Wailing Wall as it is sometimes called, is the most sacred Jewish site in the world.  It is the closest that Jewish pilgrims can come to the Holy of Holies, that part of the Temple once thought to have housed the Ark of the Covenant, and where each year the high priest came to seek God’s forgiveness for the Israel’s sins.  For all Jews it is the pilgrimage destination of a lifetime.  The Old City of Jerusalem is a prospective UNESCO World Heritage Site.

In the year 586 BC, Jerusalem was conquered and destroyed by the Babylonians, thus marking the end of the Southern Kingdom of Judah and all traces of the original realm founded by King David.  The majority of the Jewish population that survived was deported to other places in the Babylonian Empire, and Jerusalem became off-limits for a time.  However, this tribulation lasted barely more than a few decades, for the Persian Empire subsequently conquered the Babylonians and allowed the Jews to return to their homeland.  By the second half of the 6th century BC, large numbers of Jews had returned from exile, and in 516 a second temple was constructed on the site of the first.

Although Judea remained a Persian province for the next two centuries, the Jews enjoyed considerable autonomy until the invasion of Alexander the Great in the 4th century BC, which once again put the region under the domination of a hostile foreign power.  Between 332 and 198 Jerusalem was incorporated into a succession of Greek empires: The Macedonians, the Ptolemies, and finally the Seleucids.  However, the increasing efforts of the Greeks to hellenize the Jews eventually sparked a massive revolt.  In 165 BC, Jerusalem was liberated and the Second Temple, which had not been destroyed, was cleaned and resanctified.  Once again Jerusalem was the capital of an independent Jewish nation.

Jerusalem enjoyed one last century of freedom before the Romans showed up in 64 BC.  After Pompey secured Judea for the empire, authority over the region was shared between a Roman governor and an appointed monarch who acted as a client king.  The most famous of these was Herod the Great, who though generally hated, was instrumental in the rebuilding of Jerusalem on a massive and modern scale.  Under his rule the city reached its greatest architectural glory since the days of Solomon.  The Temple compound was vastly expanded and embellished.  But the Roman/Jewish arrangement was not well received by the populace, and for the next two centuries Rome was continually forced to put down uprisings in Judea.

In 70 AD, the Great Revolt led to the Roman Empire’s outright occupation of Jerusalem and the destruction of the Great Temple.  By the end of the Bar Kochba Revolt in 135 AD, Jerusalem became a permanent posession of the Roman Empire and its Jewish population completely driven out.  From that time on, the Holy City was effectively forbidden to the Jews.  Although small communities of Jews continued to survive in and around Jerusalem, it would not be until the 19th and 20th centuries when a significant Jewish population returned to the city.

When the Romans laid waste to Jerusalem after the Great Revolt, they did a particularly thorough job.  Little survived their destruction, and much of what did survive fell victim to the later ravages of future conquerors.  Jerusalem’s most sacred place, the Second Temple, went up in flames, though according to some accounts this vandalism was an accident.  Though the Temple Mount itself was undamaged, it was subsequently stripped of much of its stonework for use in other municipal projects.  Only portions of the eastern, southern and western walls of the Temple compound still stand.

The Western Wall, the most important surviving fragment of the Second Temple, was just a retaining wall added by Herod when he expanded the temple compound.  It is the Western Wall’s proximity to the location where the Holy of Holies once stood that makes it so venerated.  All of the surviving walls are constructed with massive stones probably taken from Herod’s Quarry.  The nooks and crannies between the stones are often crammed full of papers with handwritten messages and prayers.  Another prayer area, accessible through the nearby Wilson’s Arch, also dates from the time of Herod, as do the Huldah Gates built into the south wall.

Jerusalem is home to literally fifty or more sites of Jewish interest, from historic places to museums to synagogues to tombs.  Moreover, many of these are open sites, or heavily restricted areas, or both.  It is impossible to encapsulate all of the city’s visitor information in this book.  However, the visitor information for virtually any place in Jerusalem can be found on the city’s municipal tourism site.  The Western Wall is an open site, with no official hours (although security concerns or special events may restrict visits from time to time).  There is no cost for admission.  Web: www.goisrael.com (official tourism website of Israel)

Virtually nothing remains of Jerusalem’s Herodian-era fortifications.  Only one structure, the Golden Gate, is located in the same place as it was during the Second Temple period.  Both Jews and Christians believe that the Messiah will return to Jerusalem through this gate, which is why the Ottomans sealed it off five centuries ago.  The archaeological remains of dozens of other structures of the period include portions of the Tower of David and the Antonia Fortress.  Other Herodian sites include the ruins of his palace and other public buildings that he constructed.  Herod’s Quarry, where much of the stone for the Second Temple was acquired, was just rediscovered in 2007.