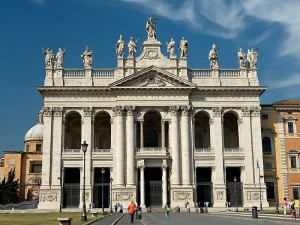 When most people think of the Papacy and the Church in Rome, first thoughts usually go to Vatican Hill which is now home to St. Peter’s Basilica and the vast complex of buildings, churches and palaces which make up Vatican City.  But for the better part of 1,300 years it was not the Vatican Hill on Rome’s west side that was synonymous with the Church, but rather the Lateran Hill on the eastern side.  Here, from the 4th through the 17th centuries, the Popes ruled a vast Christian empire from a Roman-era complex that included both the Lateran Palace and the Cathedral of St. John In Lateran, the first church in the world to be designated as a basilica.  Officially it is still the seat of the Pope in his capacity as Bishop of Rome, and is the second most important and popular Christian site in Rome after the Vatican.  Both buildings are part of the Vatican City UNESCO World Heritage Site.

Rome’s Christian community is the believed to be the oldest in Western Europe.  It was founded as early as 50 AD by luminaries such as Peter and Paul and for well over two centuries the Church of Rome clung to a delicate existence in the face of nearly constant persecution.  Throughout this period, Christianity was largely an underground affair, both literally and figuratively, with many churches hidden out-of-sight in houses or in the catacombs.  Things changed drastically in the wake of the Edict of Milan in 313 AD, which legalized the practice of Christianity throughout the empire.

Rome’s Christian community was finally able to come out into the open, and the number of adherents skyrocketed.  Within decades of Constantine’s declaration, churches and shrines were erected throughout the city.  Around the same time as the Edict of Milan, a curious event took place that would alter the history of Christianity, and the Roman Catholic Church, forever.  On the east side of Rome there was a palatial estate that had belonged to the Laterani, one of the most famous and prominent families in the Roman Empire.  This ancient estate was passed down over generations, until it was inherited by Fausta, the second wife of Emperor Constantine.  Upon their marriage he assumed possession of the estate.  In the year 311 AD, Constantine in turn gifted it to the Bishopric of Rome.

This acquisition, and the subsequent construction of a major new church on the site, established the Bishop as a major power in Rome.  Some see this event as marking the true beginning of what is now known as the Roman Catholic Church.  The church’s prestige was further enhanced by the inclusion of the Scala Sancta, which were presented as a gift to the Bishop of Rome by Helena, the mother of Constantine.  According to tradition, these steps came from the governor’s palace in Jerusalem, and were climbed by Jesus on his way to trial.

From these humble beginnings, Church power was consolidated at the Lateran; originally established as the seat of the See of Rome, it grew in importance until it was the seat of Christian authority in Western Europe.  For most of the Middle Ages its only true rival was the Patriarchate of Constantinople in Eastern Europe.  For well over a thousand years, with the brief interruption of the Babylonian Captivity in Avignon, the Popes reigned over the Church from the Lateran Palace.  The Lateran finally lost its vaunted status in the early 1600s, when Papal activities relocated to the Vatican across town.  Nevertheless it retains its formal status as the official church of the Bishop of Rome, and is the city’s second most significant and popular historic Catholic site.

The Basilica of St. John In Lateran is both historically and religiously the most important church in Rome, though St. Peter’s is more famous and more popular.  It was the first of Rome’s seven great churches to be founded, and is recognized as the Mother Church of Roman Catholicism.  During the 14th century, the original church was badly damaged by fire; most of the current structure dates from reconstructions in the 16th and 18th centuries.  Although the traditional Roman architectural floorplan was preserved, the Basilica is a product of the Renaissance and Baroque eras.  For pilgrims, the highlight of the Church is the Scala Sancta, or Sacred Stairs, which are climbed daily by thousands of pilgrims.  Of all of artifacts in the world connected to Jesus, these steps are the most likely to be authentic.

The adjacent Lateran Palace is, if less important religiously, perhaps even more important historically and architecturally.  A palace has stood on the site since before Christian times, and the ancient Roman structure was used by the Church for well over a thousand years.  It too was damaged by fire in the 14th century, but the palace was better preserved during its restoration than the Basilica was.  Because of this it offers one of Rome’s best glimpses of ancient architecture.  The palace still houses the official offices of the Diocese of Rome, as well as a museum which houses some overflow exhibits from the Vatican Museum.

The Lateran complex is located on the east side of Rome, about three miles from the Vatican.  It is open daily from 7:00am-6:00pm.  There is no charge for admission.  Web: www.vatican.va/various/basiliche/san_giovanni (official website)