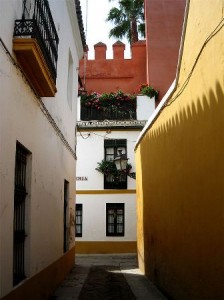 During the centuries when the Moors ruled the Iberian Peninsula, southern Spain, or Andalusiam, became the most important center of Jewish life in Europe.  The various Islamic dynasties which ruled in Spain were, on the whole, more tolerant of Jews than in other places, and the Jewish community rose to a level of political and cultural influence that would not be matched in Europe again until the Enlightenment many centuries later.  From a cultural standpoint this period was even more important, and Spain produced some of the most renowned Jewish scholars and artists of the Middle Ages.  Many beautiful architectural treasures of the Jews in Andalusia can still be found scattered around in the cities of Cordoba, Seville and Granada and other places in the south of Spain.  The Historic Center of Cordoba is a UNESCO World Heritage Site.

It is possible that the first Jews arrived in southern Spain along with the Phoenicians in very ancient times.  There were certainly many Jews living in Spain during the later years of the Roman era.  This was due in part to the forced relocation of the Jews following the Great Revolt.  Because Spain lay at the extreme western end of the empire, and since it was somewhat underpopulated in the 1st century AD, it was a doubly logical place to relocate large numbers of Jewish refugees away from their homeland.  Until the 6th century, the Jews of Spain weathered the growth of Christianity and the oppressive rule of the Romans and Visigoths fairly well.

In 587 AD, however, the Visigoth rulers converted to Christianity, after which living conditions for the Jews in Spain deteriorated rapidly.  The Visigoths were particularly violent towards the Jewish population, so by the time Muslim invaders arrived from North Africa in the 8th century, they were generally welcomed as liberators.  This ushered in a golden age of Judaism which lasted for the better part of three hundred years, the longest such age of prosperity during the Diaspora.  Jews became highly regarded as merchants, scholars and physicians, as well as many other professions, both by Muslim rulers in the south and Christian rulers in the north.

The Jews of Spain reached the zenith of their civilization during the years of the Ummayad Caliphate, which ruled most of the Iberian Peninsula from 756 to 1031.  However in 1031 the caliphate collapsed, and Islamic Spain disintegrated into a dozen minor kingdoms.  Some of these petty states retained their tolerant attitudes toward the Jews, while others began to show new anti-Semitic colors almost immediately.  Within a few decades, Spain had gone from being a place where Jews found tolerance and peace to being just another place where Jews lived in fear of the sudden and often violent outbursts of their Christian and Muslim neighbors.

For many Jewish scholars, the cataclysmic events that marked the beginning of the end of the Jewish golden age in Spain were the anti-Jewish riots in Granada in 1066.  For centuries the Jews of Granada had enjoyed exceptional peace and prosperity, and at times exceptional political power.  In the mid-11th century, Joseph ibn Naghrela, the son of Granada’s chief rabbi, was appointed chief counselor to the king.  This appointment raised the ire of the Muslims at court, and on December 30, 1066, Joseph ibn Naghrela was assaulted by a mob and brutally crucified.  Over the next few days the mob went on to slaughter four thousand Jews, almost the entire Jewish population of the city.  After this the Jews began to defect en masse to the relative safety of Christian Spain, where four hundred years later they would endure an even greater bloodbath instituted by the Spanish Inquisition.

While most cities in southern Spain have very ancient Jewish districts, there are few surviving early synagogues.  One of the oldest and probably the most famous of these is the Cordoba Synagogue.  Built on the site of an earlier synagogue, it actually dates from the early years following the Christian Reconquista.  However, the strong Moorish influence on the Jews of Cordoba is reflected in the architecture and style of this building, and it probably appears much like its predecessor did during the golden age.  The synagogue underwent a significant restoration in the 1980s and was rededicated on the 850th anniversary of the birth of Moses Maimonides.

One of the best preserved medieval Jewish quarters in Spain is that of Seville.  The Seville Jewish Quarter, located in the city’s Santa Cruz district, has probably occupied the same spot since Roman times.  The neighborhood architecture is an eclectic mix of styles with Moorish elements in many of the buildings.

The cities of Cordoba, Seville and Grenada are located in the Andalusia region of Spain, approximately two hundred miles south of Madrid.  The Cordoba Synagogue is open Tuesdays through Saturdays from 9:30am-2:00pm and 3:30pm-5:30pm (morning hours only on Sundays).  The cost of admission is Eu0.30.  The Seville Jewish Quarter is more about exploring the neighborhood, and is thus an open site.  Web: www.turismodecordoba.org (official tourism site of Cordoba); www.visitasevilla.es (official tourism website of Seville)

Besides the old synagogue, Cordoba is also home to a memorial Statue of Moses Maimonides, one of the rare statues in the world of a major Jewish medieval personage.  The place where Joseph ibn Naghrela was crucified is located within the walls of the Alhambra Palace in Granada.  The oldest Jewish site of interest in Spain is the old Roman Synagogue Ruin in Barcelona, which date from pre-Visigothic times.