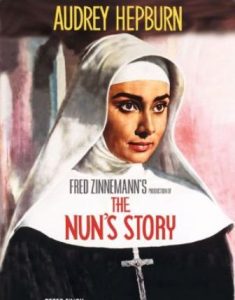 Why do we love films about nuns? What is it about those Catholic women who choose to devote themselves to the habit that inspire such great movies?  From historical dramas and dark themes to epic musicals and riotous comedies, nuns have graced the silver screen in countless ways over the decades.  Some of these movies boast unbelievably memorable filming locations, locations that have inspired pilgrimages from San Francisco California to Salzburg, Austria.  Here are some of the best, in order of release date:

One of the earliest truly well-known films about nuns, “The Nun’s Story” adapts the semi-fictional book about a woman’s journey in faith as a nurse. It recounts the life of Sister Luke as she takes her vows in Belgium and moves to Africa to serve as a missionary.  However, her efforts to make a difference in the world ultimately leave her disillusioned.  Directed by Fred Zimmermann and starring Audrey Hepburn, The Nun’s Story was a critical success, receiving eight Academy Award Nominations.

Most of the scenes that take place in Belgium were filmed on location in the scenic city of Bruges.  The 13th century Catholic hospital of Onze-Lieve-Vrouw ter Potterie (Our Dear Lady at Potterie) stood in for the convent building, while the house at Sint-Annarel 22 was also used as a filming location.

It is unlikely that there will ever be a greater film about nuns made than “The Sound of Music”.  This sweeping epic, one of the most successful and beloved movies of all time, tells a heavily romanticized version of the true story of the convent novice Maria von Trappe.  At the direction of her order’s mother superior, Maria goes to work as a governess, falls in love with the widowed father of the family, and ultimately chooses a life of family.  Directed by Robert Wise and starring Julie Andrews, The Sound of Music was a smash success, winning six Academy Awards including best picture.

The Sound of Music was filmed almost entirely on location in and around Salzburg, Austria, and catering to devoted fans of the movie has become a cottage industry there.  The actual Nonnberg Abbey was used for abbey exterior shots, while nearby St. Peter’s Cemetery stood in for other parts of the abbey.

One of the darker films featuring nuns, “Agnes of God” tells a strictly fictional story of a young nun who gives birth and abandons the newborn to its immediate death.  The subsequent investigation leads to an accusation of murder, a claim to immaculate conception and revelations of child abuse.  Directed by Norman Jewison and starring Jane Fonda, Agnes of God became a memorable addition to the genre despite receiving mixed reviews and limited box office success.

Virtually the entire movie was filmed at the former Rockwood Academy in Rockwood, Canada.  An old religious school built in the mid-19th century, the school was actually closed in the 1880s.  Despite this it was in good enough shape to be used as a filming location nearly a century later.

On the lighter side of things there is “Sister Act”, a completely fictional comedy about a nightclub singer who witnesses a mob hit, forcing her to go into hiding in a convent.  There she embraces (sort of) her new life, taking direction of the convent’s choir and leading them to help revitalize the surrounding neighborhood.  Directed by Emile Ardolino and starring Whoopi Goldberg, Sister Act was a critical and financial success.

Many of the scenes from Sister Act were filmed in and around St. Paul’s Catholic Church, one of the oldest and largest Roman Catholic churches in San Francisco.  The current building was completed in 1911, and has survived, among other things, several major earthquakes.  Called St. Katherine’s Cathedral in the film, the church as used for both interior and exterior filming.  Actually located in an upscale neighborhood, the crew had to temporarily overhaul the area to give it a run-down, urban decay look which is not evident today.

The most recent and possibly the most powerful film on this list is “Doubt”, and exploration into the darker side of the Roman Catholic Church.  A fictional account influenced by possibly true incidents, it follows a nun’s personal investigation into the possible abuse of an altar boy by the parish priest.  Directed by John Shanley and starring Meryl Streep, it is one of the most memorable and disturbing movies featuring nuns ever made, receiving four Academy Award nominations.

Much of Doubt was filmed at St. Anthony’s School, a religious academy attached to St. Anthony’s Church in the Bronx where the movie is set.  While the church and school are both still there, the school closed in 2013.