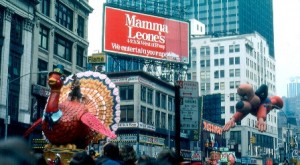 For more than a century, Santa Claus and his helpers have been popping up in department stores all over the world, greeting children and taking mental notes concerning each young supplicant’s Christmas wishlist.  But thanks to the 1947 Christmas classic movie Miracle on 34th Street and a phenomenal marketing effort, Macy’s flagship department store in New York City is home to what is by far the most beloved Santa Claus in the United States, and perhaps the world.  Ever since the movie’s release more than six decades ago, it has been the policy of Macy’s to unwaveringly insist that it’s Santa is the one and only Santa.  He arrives every year with the Macy’s Parade on Thanksgiving, the world’s most famous holiday parade.

Macy’s Department Store is a New York City institution and one of the single largest retail stores in the world.  Construction began on the current building in 1901, and after a number of expansions eventually came to occupy an enormous city block at one of New York’s most prestigious corners: Broadway and 34th Street.  It has hosted a Santaland almost every Christmas since the early 20th century.  Macy’s Santa is a cultural icon, and over the years Santaland has grown into a mammoth affair, occupying a substantial portion of one of Macy’s upper levels.  It features a labyrinth of sets through which children queue to visit Santa.  The big man himself can be found atop his majestic throne at the end of the maze, where he personally gives every child an audience. 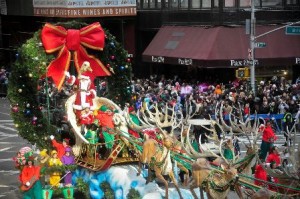 To many the highlight of Santa’s month-long visit to New York City is his appearance in the renowned Macy’s Thanksgiving Day Parade.  Make no mistake: while this parade takes place a month prior to Christmas, it is all about Santa Claus; and he is welcomed in grand fashion, escorted by giant balloons, enormous floats, legions of marching bands, hordes of entertainers and scores of celebrities.  For most New Yorkers, and many Americans, Macy’s parade officially marks the start of the holiday season.

Macy’s Department Store is located in the very heart of New York City, close to every conceivable form of public transportation.  Santaland is only open in the last few weeks of the year, from the Friday after Thanksgiving until Christmas Eve.  However, souvenirs related to Macy’s Santa are available year-round.  The store is open Mondays through Saturdays from 10:00am-9:30pm; and Sundays 11:00am-8:30pm (there are often extended store hours during the holiday season).  There is no charge for admission.  The Macy’s parade welcoming Santa Claus takes place every year on Thanksgiving Day beginning at 9:00am.  Web: http://social.macys.com/parade (official website of Macy’s Department Store)