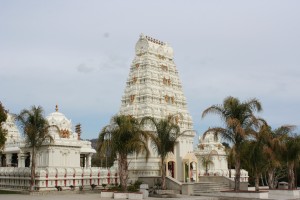 The Malibu Hindu Temple in California was one of the earliest major Hindu temples on the West Coast, and is arguably the most beautiful in the United States.  It is also considered to be one of the finest examples of traditional Indian religious architecture in America.  Since its consecration this magnificent temple has been a magnet in California for those seeking an alterative to traditional American Christianity but still mainstream from an international perspective.

Soon after the expansion of immigration policy in the 1960s, immigrants from India began arriving on the West Coast.  Not surprisingly, many found their way to California, which already had a worldwide reputation for progressiveness and was at the time one of the more welcoming regions for Hindus.

Hinduism thrived in California, thanks in part to the counter-culture movement that was then sweeping the United States.  This movement was particularly strong in California, where young people were looking to embrace new theological ideas and philosophies.  Here Hinduism enjoyed the benefits of being a major religion while at the same time being alternative, both of which gave it credibility in California.

By the late 1970s, the Hindu population of Southern California was large and included both Indian immigrants as well as many American-born adherents, and it was decided that a new temple was needed to serve the community.  A site was chosen in the wealthy Los Angeles suburb of Malibu. 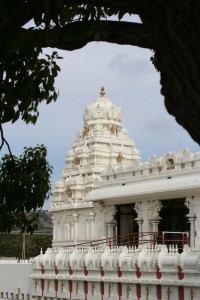 In 1981, the Malibu Hindu Temple was completed.  Thanks to generous donations from local wealthy Hindus, many of whom were part of the fil industry, the temple was built in lavish form and scale, and was one of the most beautiful religious centers opened in the 1980s.  Since its completion, it has hosted many celebrities, many of whom are adherents, and has occasionally been used as a filming location.

The Malibu Hindu Temple is a stunning complex of white brick and marble buildings.  It is considered to be one of the finest examples of Hindu architecture anywhere outside of the Asian subcontinent.  Surrounded on several sides by open space, the temple stands out against the lush tree-dotted hills.  The most striking features are the pyramid-like towers covered with carved images from Indian mythology. 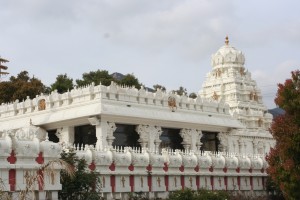 The large complex is divided into two sections: the upper temple and lower temple, where the Hindu Lords Venkateswara and Shiva are venerated respectively.  There are also facilities, both indoors and outdoors, for those seeking quiet and meditation.

The Malibu Hindu Temple is set among the scenic Santa Monica Mountains, approximately ten miles northeast of Malibu and thirty miles west of Los Angeles.  It is open weekdays from 9:00am-7:00pm (closed midday 12:30pm-5:00pm; longer hours in summer) and weekends from 8:00am-7:00pm.  There is no cost of admission.  Web: http://malibuhindutemple.org (official website). 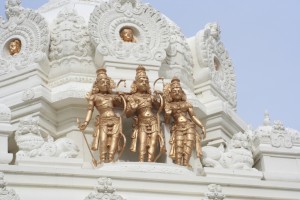 Over the last few decades, Hinduism has spread throughout Southern California, and there are now a number of local temples that serve the community.  Probably the next best known one is the Valley Hindu Temple in nearby Los Angeles.  Interestingly, the largest Hindu temple complex in the United States is the Radha Madhav Dham in Austin, Texas.