Every year around this time, the thoughts of countless party-oriented Americans turn to New Orleans and the nation’s largest annual bacchanalia, Mardi Gras.  But in the stampede towards the Big Easy, it is often forgotten that Mardi Gras is a religious feast day designed to prepare for the Lent.  It is also easily forgotten that while the Mardi Gras celebration of New Orleans is by far the most famous, it is not the only Carnival celebration in America.  Incidentally, the proper name for the holiday is Carnival; Mardi Gras, which is French for Fat Tuesday, technically refers only to the last day and night before Ash Wednesday. 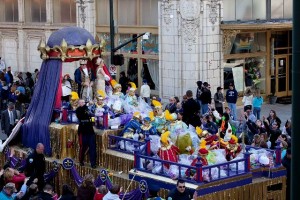 Carnival was introduced to North America by French Catholic settlers in the late 17th century, with the first known celebration taking place in Plaquemines Parish in 1699.  The first regular, annual Mardi Gras celebration was established four years later in Mobile, then capital of the French Louisiana Territory.  Mobile’s Mardi Gras celebration was eclipsed when the French moved the colonial capital to New Orleans.  Despite being overshadowed by its more famous rival to the west, the Carnival of Mobile still enjoys the title of America’s oldest Mardi Gras.

Carnival in Mobile is not only the oldest such festival in the United States, it is also one of the longest.  Celebrations start as early as November, with private parties and balls taking place throughout Advent.  The official celebration runs roughly in the three weeks proceeding Ash Wednesday.  Like New Orleans, the parades and parties of Mardi Gras in Mobile are organized by Krewes, the most famous being the Order of Myths, which traditionally hosts the final parade of the season.  In the last few years, the Carnival of Mobile has attracted between 800,000 and one million attendants, making it the second most popular Mardi Gras in the United States. 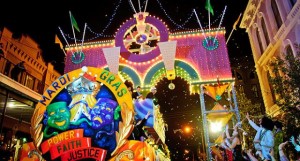 Galveston hosts one of the youngest of America’s major Mardi Gras celebrations.  Galveston Island, which was a popular hangout for French pirates in the early 19th century, imported the festival just after the Civil War.  The earliest celebration, which included only a single ball and the performance of Shakespeare’s Henry IV, was started in part to help the community move on after the war.  In 1871 the first Krewes emerged, and the small festival quickly blossomed into a major event.  After a long lull in the wake of World War II, Galveston’s Mardi Gras was reborn in the 1980s.

While Mardi Gras in Galveston is shorter, much smaller in scale and much more sedate than those of New Orleans and Mobile, it is no less fun.  It is also arguably, with the exception of the last two nights, the most family friendly, with a greater emphasis on parties and parades geared towards youngsters.  Over twenty Krewes host events, including the revived Knights of Momus, the oldest such organization in Texas.  Although Galveston’s Carnival only runs for the two weeks leading up to Ash Wednesday, it has drawn nearly a quarter of million visitors annually for the last few years.

Biggest Mardi Gras Outside of the South 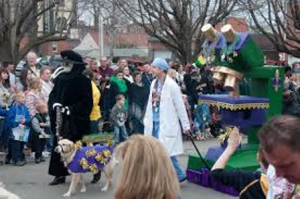 The City of St. Louis was founded by French settlers in the mid-18th century as a trading post where the Missouri River joins the Mississippi.  However, the city’s modern Carnival celebration has nothing to do with these early pioneers.  According to local legend, St. Louis’ Mardi Gras was established barely three decades ago by a few bored bar patrons on Soulard Street who were looking for something to do.  From those humble beginnings, which reflected nothing of either religious or cultural importance, a St. Louis tradition was born.

Mardi Gras in St. Louis sort of resembles its more famous sibling just a few states down the Mississippi River.  There are Krewes, parades, concerts and parties, with all of the accoutrements.  Although most events have usually taken place in and around Soulard Street, some activities, including the main parades, are now located in downtown.  Mardi Gras in St. Louis has a reputation of being pet friendly, with a bevy of pet-related events, from the Wiener Dog Derby to the Pet Parade.  With hundreds of thousands of attendants annually, St. Louis’ Carnival is the biggest annual Mardi Gras celebration outside of the South. 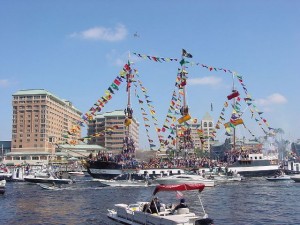 Although not a Mardi Gras celebration per se, Tampa’s Gasparilla Pirate Festival does fall within the Carnival Season.  Any resemblance to Mardi Gras is not coincidental.  Founded in the early 20th century, Gasparilla actually began as a commemoration of the Spanish buccaneer Jose Gaspar, who lived nearly a hundred years earlier.  The early celebration was little more than a mock battle in Tampa Bay, followed by a ceremonial surrender to the pirates and local parties thrown for American sailors.  Over time it morphed into a massive, Mardi Gras-like extravaganza, with parades, parties and Krewes.

The Gasparilla Festival runs over the course of two weeks, usually in late January or early February, though the dates are flexible.  Major events include the arrival of a pirate flotilla in Tampa Bay, a massive day parade, a pageant and a night parade in the French Quarteresque Ybor City.  Although not technically a Carnival celebration, the festival is organized by Krewes.  In many cases the Krewes of Tampa are actual crews who man the many ships which take over the harbor for the festival.  Nearly half a million people attend the Gasparilla Festival annually. 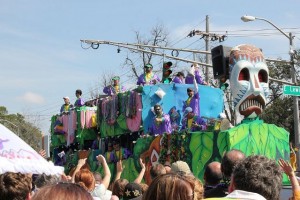 Because Mardi Gras in New Orleans is such a massive event, the rest of Louisiana is often overlooked.  However, Carnival is celebrated throughout the rest of the state, and for those seeking a smaller, more simple, more traditional or even (gasp!) more religious celebration, there are plenty to choose from.  There is an especially large selection of alternative Mardi Gras destinations in Cajun Country, notably in Baton Rouge, Lake Charles, Houma and New Roads.  The city of Lafayette hosts the second largest Mardi Gras celebration in the state.

For the most traditional celebrations, however, the curious must seek out the small towns which still put on the Courir de Mardi Gras, or Fat Tuesday Run.  This age-old, tradition includes caroling, begging for treats in costume, a horseback parade and a community meal featuring gumbo.  The Courir de Mardi Gras is still practiced in many small towns, especially in the vicinity of Lafayette.  Among the best of these smaller festivals are those held in Church Point and Eunice, the latter of which annually boasts the world’s largest King Cake.