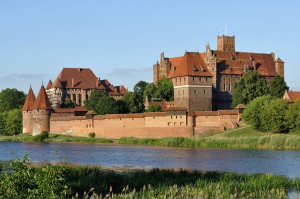 The Order of the Teutonic Knights was one of the three great knightly orders of the Middle Ages.  In the wake of the collapse of the Crusades, the Teutonic Knights, like their brethren the Templars and Hospitallars, found themselves driven back into Europe.  Composed mostly of soldiers from the German lands, they regrouped and reestablished themselves at Malbork Castle in what is today Poland.  It remained their chief stronghold for the better part of the Middle Ages.  Although the Teutonic Knights are now gone from Marienburg, and although Malbork currently lies within Polish territory, Malbork Castle is considered an honored place among German Christians.  It is becoming an increasingly popular destination for German Christian visitors to Poland.  Malbork Castle is a UNESCO World Heritage Site.

The Order of the Teutonic Knights of St. Mary’s Hospital in Jerusalem was the last of the three major knightly orders of the Crusader period to be established.  Founded by German crusaders in the late 12th century, their initial purpose was to aid and protect Christian pilgrims traveling to Palestine from the Holy Roman Empire and Central Europe.  However, their efforts in the Holy Land were short-lived, as most of the Levant had already been reconquered by Islam by the time the order was formed.  In 1211 AD, a few decades after they established themselves in Acre, the Teutonic Knights withdrew to Europe where they remained the most active of the Crusading orders for centuries to come.

One of their first stops was Transylvania, where the Teutonic Knights fought with the Hungarians against nomadic tribes from the east.  A little over a decade later they were forced to relocate once more due to a jurisdictional conflict between the Papacy and the Hungarian monarchs.  Many went to Venice, which became the order’s headquarters following the fall of Acre.  Others moved further north, to Prussia, where they began to establish permanent strongholds along the Baltic Sea Coast.  The greatest of these, Marienburg Castle, was built in the late 13th century.  In 1309 the last of the Teutonic knights vacated Venice and removed to Malbork.

The Teutonic Knights spent the better part of the 13th, 14th and 15th centuries ostensibly working to Christianize Europe’s northeastern frontier, though many believed that they simply desired to expand the order’s power and influence in the east.  This was especially true after the Lithuanians converted to Christianity in the 14th century.  In the ensuing ages, most of the Teutonic Knight’s crusading efforts, such as they were, largely revolved around the war for influence between the Orthodox east and the Catholic west.  By the beginning of the 15th century, the Teutonic Knights controlled huge swaths of territory in northeastern Europe.

The Teutonic Order reached its height in the years leading up to the Battle of Grunwald in 1410, by which time Malbork Castle had become one of the largest and most powerful fortresses in Europe.  However, the Teuton’s swift decline began soon thereafter.  Within half a century, the Poles and Lithuanians had conquered almost all of the Teutonic Knight’s territory in the east, and Malbork Castle passed into Polish hands in 1457.  At that time Malbork Castle had lost virtually all religious significance, and fell into decline under a series of neglectful occupiers.  The Teutonic Order itself survived in one form or another until it was all-but-ended during the Napoleanic Wars.  Malbork Castle has since been restored and is now one of Northern Poland’s most popular tourist sites.

Malbork Castle, is one of the largest Gothic brick structures in the world and one of the largest mostly intact medieval castles in Europe.  Its distinct brownish-red walls and red tile roofs dominate the banks of the Nogat River just outside of Malbork.  Looking at the castle’s exterior, it can be easy to forget that the place was originally a Christian monastery rather than simply a massive military fortification, and that at its height it housed more than three thousand warrior-monks.

The monastery-fortress is divided into three sections: the High Castle, home to the original monastery; the Middle Castle, home to the Palace of the Grand Master; and the Low Castle, where most of the common soldiery was stationed.  Most of the religious sites of interest are located in the High Castle, including the chapter house, church and chapel.  Most of the castle is now given over to an expansive museum with many exhibits on the history of the Teutonic Order.

Malbork Castle is located in the extreme north of Poland not too far from the Baltic Coast, about three hundred miles north of Warsaw.  The castle and exhibits are open April through September from 9:00am-7:00pm, and from October through March from 10:00am-3:00pm.  Admission is ZT25.00.  Web: www.zamek.malbork.pl (official website)