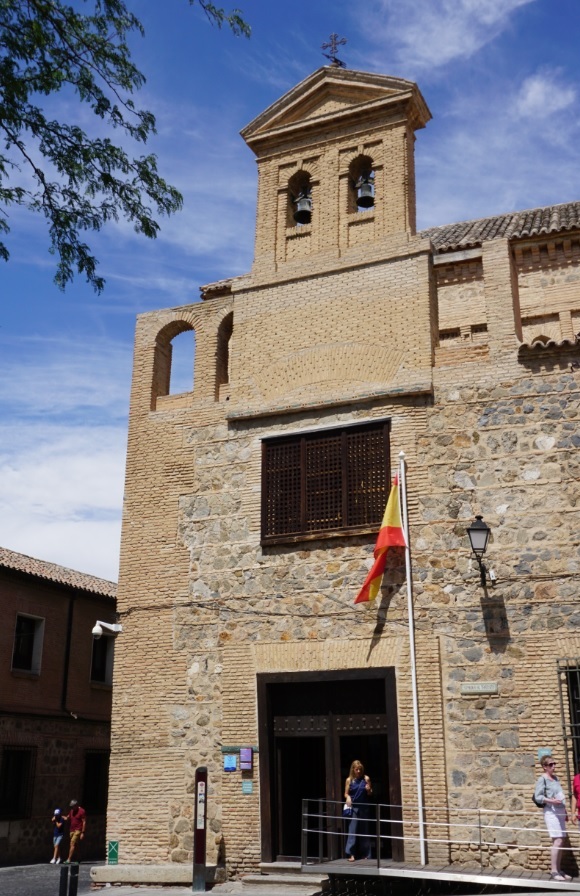 Throughout the Middle Ages, synagogues were constructed by Jewish communities all over Europe.  While very few survive from this period, there are several noteworthy clusters of historic medieval synagogues that are still standing throughout the continent.  One such cluster can be found in the Iberian Peninsula.  Many synagogues were built in Spain and Portugal during the transition period when Christians were slowly re-conquering these areas from Muslims.  When Judaism was suppressed by the Inquisition in the late 15th century, most of these synagogues were seized and repurposed as churches.  Because of this a surprising number of medieval synagogues have managed to survive here, especially in Spain.

The Greater Synagogue of Barcelona, also referred to as the Ancient Synagogue, is counted among the oldest synagogues in Europe.  Forgotten for centuries, the building’s former use as a synagogue was rediscovered in the 1980s.  While part of the building has been dated to the Roman era, it was not likely used as a synagogue until the Middle Ages.  Recently renovated, the building is now home to a museum.

Sometime around the 4th century CE the initial building was constructed, a time which does coincide with the existence of an early Jewish community in Barcelona.  The synagogue as it now exists largely dates from the 13th century.  During the 1980s a researcher was able to identify the probable location of the synagogue based on records from the Middle Ages.  The building was subsequently restored and reopened to the public in the early 2000s.

The Greater Synagogue is one of Barcelona’s most important architectural treasures.  Regardless of whether or not it was originally used as a synagogue, the fact that some of the original Roman-era building is still in use is impressive.  Most of the building is of medieval origin, with thick stone walls, arched ceilings, and a glass floor that reveals the original foundations.  The synagogue also possesses a centuries-old Torah scroll that is still in use.

Toledo boasts two of the best preserved medieval synagogues in Spain: The 12th century Ibn Shushan Synagogue and the 14th century Samuel Halevi Abulafia Synagogue.  It is unknown exactly when Jews first settled in Toledo.  There was at least a small community of Jews here by the time the Spain was conquered by the Muslims in the 8th century.  During the years of Islamic rule the Jewish community of Toledo thrived, with a population that supported at least ten synagogues.

In 1085 CE a Christian army from the Kingdom of Castile conquered Toledo.  While the Muslim population of the city suffered, the Jewish community was mostly left alone, at least for a while.  In 1180 CE the Ibn Shushan Synagogue was built.  It remained in use for over two hundred years before being seized and converted to use as a church under the name of Santa Maria la Blanca.  It is believed that Conversos might have worshipped here under the guise as Christians.

Toledo’s other historic synagogue, the Samuel Halevi Abulafia Synagogue, was built in the late 1350s.  Its namesake was a high ranking Jewish official who served the royal house of Castile.  Constructed in the wake of the Black Plague, it is a miracle that this synagogue was built at all in the face of the anti-Semitism of the era.  It remained in use as a Jewish house of worship until 1492 CE when it was converted to use as a church under the name El Transito de Nuestra Senora.

The Ibn Shushan Synagogue is one of the oldest essentially intact synagogues in Europe.  However, it has not been used as a Jewish house of worship in over six centuries.  Despite this it has been very well preserved, ironically thanks in part to its former use as a church and monastery.  The Samuel Halevi Abulafia Synagogue, now known as the El Transito Synagogue, is a similarly well preserved building despite the fact that it has not been used as a synagogue for over five hundred years.  It is now home to the Sephardi Museum.

The Cordoba Synagogue, completed in the early 14th century, is part of an historic Jewish quarter that dates from a time when Cordoba was the largest and most magnificent city in Europe.  From the time the Umayyad Caliphate reached its height in the 10th century until the late Reconquista, the Jewish community of Cordoba flourished.  Under the caliphate the Jewish community of Cordoba grew and thrived, with Jews serving in prominent positions under various governments.  Moses Maimonides was born in Cordoba in 1138 CE.

In 1236 CE five centuries of Muslim rule in Cordoba came to an end when the Christian forces of the Reconquista captured the city.  The city’s Jewish community was left alone, albeit in a lesser position than they had enjoyed under the Muslims.  In the late 15th century the Spanish Inquisition led to the end of the community, with the city’s Jews either converting or forced to flee.  The synagogue was put to a variety of uses including as a church.

The Cordoba Synagogue, the only surviving Jewish house of worship in the city, is built on the site of an earlier synagogue.  The strong Moorish influence is reflected in the architecture and style of this building, and it probably appears much like its predecessor did during the Islamic golden age of Spain.  The synagogue underwent a major restoration in the 1980s and was rededicated on the 850th anniversary of the birth of Moses Maimonides.  A statue of Maimonides was erected in Cordoba in the 1930s in honor of the city’s favorite Jewish son.

The Great Synagogue of Seville, also known as the Synagogue of Santa Maria La Blanca, is yet another contender for the title of the oldest synagogue in the world.  The name “Santa Maria la Blanca” comes from the time that the synagogue was used as a church.  It is one of the most beautiful surviving medieval synagogues anywhere, and while no longer used for active worship by any religion, is maintained as an historic site.  It is one of the architectural highlights of Seville’s ancient Jewish quarter.

The quarter, also known as the Santa Cruz district, is one of the most beautiful former Jewish neighborhoods in Europe.  The entire area is a labyrinth of narrow whitewashed alleys leading to secluded plazas filled with fountains and orange trees.  Jews lived here for many centuries, first under the Muslims and later under the Christians.  Like elsewhere in Spain the Jews were driven out in 1492.  The synagogue was converted to use as a church sometime around the late 14th or early 15th century.

The Great Synagogue of Seville, like many other synagogues of Sephardic origin, is a classic Moorish building.  In fact it is one of the only synagogues that is legitimately Moorish, since it was built when Muslims still held the city.  The interior is highly reminiscent of medieval mosque architecture of Spain, and the interior bears a striking resemblance to that of the Mosque-Cathedral of Cordoba.  The building, still under the control of the Roman Catholic Church, is currently being maintained as a museum.

The Stone Synagogue of Obidos is one of the most historic Jewish architectural treasures of Western Europe.  This tiny building on the western fringe of Europe is believed to date to the Visigothic era.  Although this dating is not universally agreed to by experts, if true it would make this synagogue the oldest standing in Europe.

According to tradition the Stone Synagogue of Obidos was originally constructed in the 8th century CE.  The Jewish community of Obidos is believed to have survived more or less continually for the better part of a thousand years.  However towards the end of the 15th century the Inquisition reached Portugal, and the Jewish population was forced to either convert or flee.  Despite being damaged by the great earthquake of 1755, the building survives as a monument to this ancient Jewish neighborhood.

The Stone Synagogue is a very old building.  However, tradition aside, it is more likely that it dates from much later, possibly even as late as the post-Muslim period.  Moreover, there are also questions as to whether or not it was purpose built as a synagogue, or even when and for how long it was used as a synagogue.  That said it is a very distinctive building, with hewn stone brick walls and Gothic features.  The idea that it formerly served as a synagogue is a very strong tradition in the local community.