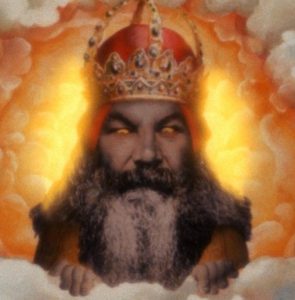 God as depicted in Monty Python and the Holy Grail (1975)

God (as in the One God of the monotheistic religions) has been depicted in film since the earliest days of the cinema. From a deep throated, disembodied off-screen voices to full blown depictions of the Lord in all of his majesty, the Almighty as a character has shown up in movies dozens of times.  If depictions of Jesus are included, than that number easily jumps into the hundreds.

As a general rule, when God shows up in a Biblical epic, such as Cecil B. DeMille’s The Ten Commandments or John Huston’s The Bible, he shows up in voice only; a majestic yet ominous voice that echoes from the screen out into the audience.  But movies that actually, physically depict God are almost always comedies.  In fact, to the author’s recollection, there was only one time that an actor was cast in the role of God in a serious, major motion picture, and that was more than eight decades ago (subsequent research confirmed this).

So which was the best portrayal of God ever in film? Or at least the most memorable?  Excluding off-screen voice roles and depictions of Jesus, here are my five favorites, in order of release, plus an honorable mention:

This classic film, based on a play by Marc Connelly (in turn based on stories by Roark Bradford), had an entirely African-American cast. It is probably the best known and most successful all African-American film made prior to World War II.  Although highly criticized by today’s standards for stereotyping and the “Uncle Tom” feel of many of the characters, Rex Ingram’s depiction of “De Lawd” is both impressive and respectful.  It is possibly the most serious depiction of God by an actor in film ever made.  (Running time 93 minutes; Rotten Tomatoes rating 86% critics / 84% audience)

This movie, based on a novel by Avery Corman, was arguably the first time (at least in a major film) that God is a figure with both a serious agenda and a sense of humor. Portrayed by famous actor George Burns, the longtime star of stage and screen imagined an Almighty who could be your kindly next door neighbor rather than a majestic bearded figure robed in white.  Burns’ God brought a serious message while at the same time criticizing organized religion and poking fun at 20th century culture, and is one of the definitive roles of the genre.  (Running time 98 minutes; Rotten Tomatoes rating 72% critics / 58% audience)

Probably the least familiar movie on this list, Time Bandits was a romp made by several alumni of the British comedy team Monty Python. It follows the antics of a young boy and a half-dozen renegade minions of the “Supreme Being” as they travel throughout time stealing everything they can get their hands on.  Beneath the comedic overtones, the movie is a semi-serious study in the nature of evil, a fact that is revealed when Ralph Richardson as the Supreme Being shows up at the end of the film to explain his motives.  A very matter-of fact deity, Richardson’s God views all of existence as little more than a experiment to study the nature of free will.  It is simultaneously humorous and disturbing.  (Running time 113 minutes; Rotten Tomatoes rating 91% critics / 77% audience)

Almost certainly the most controversial of these films, Dogma’s portrayal of God is also arguably the most unique and unusual. The film follows numerous characters, mainly a pair of renegade angels trapped on Earth seeking a way to return to Heaven; and a handful of anti-heroes trying to find a way to stop them, all while God remains helpless in a hospital on life-support.  The film actually does a ood job of presenting a theological case study while at the same time completely eviscerating organized religion.  God Is depicted by two people: Bud Cort and Alanis Morissette.  It is Morissette’s deity that is the memorable one, channeling a cheerful God that does handstands and that does not speak for fear of killing those in her vicinity.  The depiction of the Almighty by a woman drew both accolades and derision, but is nevertheless one of the definitive moments of the genre.  (Running time 128 minutes; Rotten Tomatoes rating 67% critics / 85% audience)

The most recent major film of the genre (along with its sequel, Evan Almighty), is a cult favorite. An unusual study on the nature of God’s power, this early 21st century movie features Morgan Freeman as the Lord who entrusts his power to a newsman played by Jim Carrey while he takes a vacation.  Freeman portrays God in several guises, notably a distinguished elderly gentleman in a gleaming white suit.  He channels the performances of both Rex Ingram and George Burns as he endeavors to make God conceptually more accessible, and as a result Freeman’s depiction of the Almighty is possibly the most popular to date.  (Running time 101 minutes; Rotten Tomatoes rating 48% critics / 57% audience)

When it comes to portraying God, there is no film more irreverent, or funnier, than the immortal British cult classic Monty Python and the Holy Grail. The reason it is only an honorable mention is that rather than use a live actor, God is animated by Terry Gilliam and voiced by Graham Chapman.  The movie envisions a deity as a grump who whines about his dealings with people all while bestowing upon Arthur and his knights the quest for the Holy Grail.  Arthur, responding to the quest: “Good idea, Oh Lord!”  God: “Of COURSE it’s a good idea!”  That still cracks me up every single time!  (Running time 92 minutes; Rotten Tomatoes rating 97% critics / 95% audience)