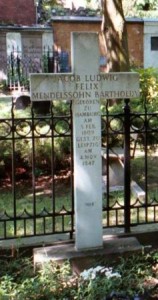 The Mendelssohn family of Germany was, with the possible exception of the Rothschilds, the most famous Jewish family of the Enlightenment.  Over the course of three generations, the Mendelssohns produced one of the greatest philosophers (Moses), one of the greatest bankers (Joseph) and one of the greatest musicians (Felix) in Germany.  The family rose to such prominence that they were considered part of European high society, a difficult achievement for Jews in the 18th and 19th centuries.  Because of Joseph’s banking business, Berlin was generally the center for the family’s lives and activities.  All three of the famous Mendelssohns are buried in Berlin, and miraculously all three gravesites survived destruction at the hands of the Nazis.

The Mendelssohns rose from very humble origins to become one of Europe’s preeminent Jewish families.  The dynasty began in Dessau in 1729 with the birth of Moses Mendelsohn.  In his earlier years he was given a religious education that included the study of Moses Maimonieds.  At the age of fourteen, his family moved to Berlin, where he studied foreign languages, philosophy and mathematics.  His career as a writer and philosopher was one of ever-increasing popularity and success, and he became the most prominent Jewish intellectual in Europe since Spinoza.  However, his ideas were much more acceptable to mainstream Judaism, and his position in the contemporary Jewish community infinitely more prominent then Spinoza’s.  Among his many achievements, Moses Mendelssohn is credited with translating parts of the Hebrew Bible into German.  He died in 1786.

Moses Mendelssohn had six children, the most famous being his oldest son Joseph.  Born in 1770, Joseph’s childhood was a far cry from the poverty of his father’s young years.  Raised in a house that was always filled with important and educated visitors, Joseph grew up both intelligent and ambitious.  In 1795, he founded his own bank in Berlin, Mendelssohn & Co., which grew into a very successful enterprise.  Though it was small compared to the Rothschild ventures, it was for a time more famous.  Like the Rothschilds, the Mendelsohn banking interests funded major development projects around Europe, and they were important military financiers.  Joseph Mendelssohn was an important fixture of the Berlin financial district until his death in 1848.

Joseph’s brother Abraham worked with him from 1804 until 1822.  Abraham, Moses’ second son, was perhaps most famous for his desire to assimilate into German society.  Rejecting his Jewish heritage, he changed his surname to Bartholdy and refused to practice Judaism as an adult.  Neither of his sons were circumsized, and all of his children were baptized.  His own baptism in 1822 coincided with the end of his banking endeavors with his brother Joseph.  He died in 1835.

Abraham’s oldest son, Felix, was born in 1809.  Although he never embraced Judaism religiously, he was more comfortable with his Jewish heritage.  Against the advice of his father, he continued to use the Jewish name Mendelssohn in his professional life.  Felix was best known as a composer and musican.  A child prodigy, he went on to become one of Europe’s greatest composers.  However, his legacy was tainted by the growing anti-Semitism of the age, and he was notoriously disliked by Richard Wagner.  Nevertheless, when he died in 1847 at the young age of 38, he left behind the greatest body of music composed by a person of Jewish origin, and is adored by music lovers as one of the towering figures of the Romantic period.

For obvious reasons, the Mendelssohn family legacy was a major target of Nazi anti-Semitism in the 20th century.  Moses’ work was suppressed, Joseph’s bank shut down and Felix’s music banned.  Nevertheless, a number of places related to the family survived the war.  The Mendelssohn House at 51 Jagerstrasse was home to the Mendelssohn & Co. Bank until the 1930s.  It is still in active use as an office building.

Moses Mendelssohn was interred in the Old Jewish Cemetery of Berlin, which was destroyed during the Nazi era.  His old, faded tombstone is the only surviving remnant of the graveyard.  The grave of Joseph is located in the Judischer Friedhof Prenzlauer Berg Cemetery.  Felix Mendelssohn is buried in the Dreifaltigkeits Friedhof Cemetery under the name Bartholdy.  The use of his last name, and the fact that the gravestone is in the shape of a cross, suggest that his descendents conscientiously made an effort to forget his Jewish heritage.

The Mendelssohn bank, as well as the three gravesites, are scattered around the city of Berlin, but all are accessible vie public transportation.  All three graveyards are open sites.  No other visitor information was available as of this writing.  Web: www.visitberlin.de (official tourism website of Berlin)

Although he was born, raised and buried in Berlin, Felix Mendelssohn is most closely associated with the city of Leipzig, where he founded a world famous music conservatory.  The Mendelssohn House Leipzig is now preserved as a museum.