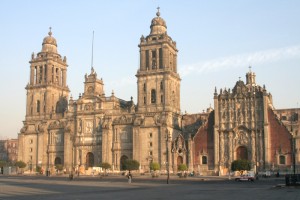 The Metropolitan Cathedral of Mexico City was the greatest cathedral built in the New World during the Colonial period, and it holds a number of distinctions.  Begun by the famous conquistador Hernando Cortez on the ruins of an old Aztec Temple, the Metropolitan is the oldest cathedral in Central America.  It is also the largest colonial-era cathedral in the New World, and the second largest in Latin America after the Basilica of Aparecida.  The Metropolitan is the headquarters of the Catholic Church in Mexico, one of the largest dioceses in the world.  It is the center of religious life in Mexico, and one of the country’s most popular draws for Christian pilgrims.  The Metropolitan Cathedral of Mexico City is part of the Historic Center of Mexico City UNESCO World Heritage Site.

The history of the Metropolitan Cathedral began in the bloody aftermath of the Spanish conquest of the Aztec city of Tenochtitlan.  Tenochtitlan was the capital of the mighty Aztec Empire in the centuries leading up to the European discovery of the New World.  It is estimated that by the early 1500s, it was one of the largest cities in the world.  It was certainly the largest city in the Americas, which made it a great prize coveted by one of Spain’s most successful conquistadors, Hernando Cortez.  In 1521 Cortez and his army of Spaniards and indigenous auxiliaries took Tenochtitlan by siege, and what wasn’t destroyed in the siege he ordered destroyed.

Among those buildings destroyed was the Templo Mayor, one of the largest step-pyramids in the city.  In 1524, it was decided that the site of the Templo Mayor would be cleared, and the location and materials used for the construction of a new cathedral.  Unfortunately, this decision established a precedent for the destruction of indigenous sacred sites and replacing them with churches, a pattern which would be repeated throughout the later colonies of the New World.  Work began soon after, and within a decade Mexico had its first major church.

However, as the capital of the fastest growing Catholic colony in the Americas, it took less than another decade for the Spanish authorities to replace this early church with an even more magnificent cathedral befitting the city’s colonial role.  Work began in 1573 with the expansion of the existing church, and would continue for the better part of two and a half centuries.  However, the construction of the cathedral was plagued with difficulties almost from the start, difficulties that were attributed by local superstition to bad luck associated with the destruction of the old Aztec Temple.

Among the problems encountered was the belated discovery that the foundations lay on top of soft ground, requiring repairs and improvements that have been ongoing for over a century.  Other problems included a major flood which halted construction in the 1600s, a fire which damaged much of the cathedral interior in the 1960s, and the tragic death of the cathedral’s bellringer in the belltower in 1947.  The Metropolitan Cathedral briefly served as the royal chapel during Mexico’s imperial period, and witnessed the coronation of Maximillian and Charlotte, the greatest royal coronation ever to occur in the New World.  Today the cathedral remains the focal point of Christianity in Mexico.

The Metropolitan Cathedral dominates the Plaza de la Constitucion in the heart of Mexico City.  Most of the cathedral dates from the 16th and 17th centuries, though much of the structure is newer due to the constant renovations of later periods.  Virtually nothing is left of the original church.  One of the largest colonial Gothic structures, the Metropolitan boasts one of the world’s broadest facades, including two massive belltowers as well as the façade of the adjoining tabernacle building.  The bell towers are home to an impressive twenty-five bells, including the famous Mute bell, which was silenced in 1947 after the death of the bellringer.

The interior of the cathedral is a veritable labyrinth of stunning art and architecture.  There are two main altars and one of the best collections of chapels in the Western Hemisphere: sixteen in all, each representing one of the cathedral’s religious fraternities.  A number of important tombs can be found throughout the cathedral, including that of Juan de Zumaragga, the first Archbishop of Mexico and one of the earliest major church figures in the New World.

The Metropolitan Cathedral is located in the very center of downtown Mexico City, and most of the city radiates out from it.  It is very close to several of the city’s other major tourist sites, including the National Palace.  The cathedral is open every day from 7:00am-7:00pm.  There is no charge for admission.  Web: www.visitmexico.com/en/mexico-city (official tourism website of Mexico City)

Mexico City is home to a great number of churches, but aside from the Metropolitan Cathedral, none loom quite so importantly as the two Basilicas of Guadalupe. These churches, one an older colonial structure and one built in the 20th century, are together home to the largest Marian Shrine in Mexico, the most important such church in North America.