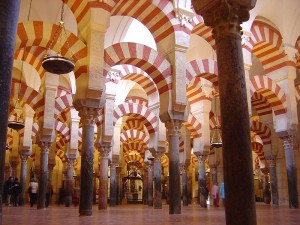 The Mezquita of Spain is one of Christianity’s greatest architectural oddities.  That is because it is, in fact, a converted mosque.  But not just any mosque; it was built by the Umayyads during their occupation of Spain, and was at the time of its construction the largest and grandest mosque in the world outside of Mecca.  After the Reconquista of Cordoba in the 13th century, the center of the mosque was gutted and replaced with a massive cathedral.  The result is one of the greatest religious architectural mish-mashes of all time: a Gothic-style church ensconsed in a Moorish-style mosque.  Because of this the Mezquita draws the fascination and curiosity of Christians, Muslims and architecture-lovers alike.  It is probably the world’s second most popular mixed Christian-Muslim site after the Hagia Sofia in Istanbul.  The Mezquita is part of the Historic Center of Cordoba UNESCO World Heritage Site.

The history of the Mezquita mosque-cathedral dates back to the Visigothic kingdom in Iberia.  The Visigoths, originally Arian Christians, abandoned Arianism in favor of Catholicism in the late 6th century.  This was soon followed by a period of prolific church construction in Spain.  Among the edifices built at this time was the Church of St. Vincent in Cordoba, then one of the largest such buildings in southern Spain.  It was the city’s preeminent Christian church for the next century, until Cordoba fell to the onslaught of Islam, along with most of the rest of the Iberian Peninsula.

Although the Muslim conquest did not bode well for the Church of St. Vincent, it was the beginning of the greatest period of Cordoba’s history.  Cordoba became the seat of the Umayyad Caliphate in Spain, and within a few centuries was one of the world’s largest and most magnificent cities.  Abd Ah Rahman I, the first emir, under pressure to destroy the Christian symbol that was St. Vincent’s, wisely decided to purchase the building instead.  This placated the local Christian population, and made it much easier to use the site for the construction of a new mosque.

On the expanded foundations of St. Vincent’s arose the Mezquita, one of the greatest mosques ever built.  At the time of its completion it was the second largest mosque in the world. It is still the third largest today, and among the most lavishly appointed.  For the next three centuries it was the major seat of the Islamic faith west of Cairo.  However, at the beginning of the 11th century the Kingdom of Cordoba began to collapse, splintering into a number of small, squabbling city-states.  This left Cordoba weak and vulnerable to Christian Crusaders advancing from Northern Spain and France.  It resisted the Reconquista until 1236 AD, when it was finally captured by Christian forces.

The magnificent Mezquita mosque was seized and, after four and a half historic centuries, was reconsecrated as a Christian Church.  Castillian architects went to work almost immediately.  A huge section of the center of the beautiful mosque was gutted to make way for the new construction.  A church literally arose in the midst of the sea of columns which supported the Mezquita’s roof.  From the 13th to the 18th century, new touches were constantly being added to the complex.  The result was one of the most unusual composite religious structures in history.  Today the Mezquita is a symbol of sorts of Christian-Islamic peaceful coexistence, and recieves hundreds of thousands of Muslim and Christian visitors every year.

Just as the Hagia Sofia in Istanbul was deemed too beautiful for destruction and converted from a cathedral into a mosque, so to was the Mezquita deemed too beautiful for destruction and was instead converted from a mosque into a cathedral.  Because of this the bulk of the Mezquita, other than the enormous church in its midst, retained virtually all of its original form and magnificence.  The imposing outer walls of the Mezquita dominate the surrounding landscape, but it is the gardens that are the focal point of the building’s outer beauty.  Bedecked with magnificent fountains as well as exotic plant-life from all over Southern Europe and Northern Africa, the Mezquita became a prototype for the palace gardens which would later flourish in Renaissance Spain.

The interior of the Mezquita is a dazzling and confusing blend of Islamic and Christian styles and uses.  More than one thousand columns made of marble, granite and precious stone pilfered from earlier Roman buildings support the massive arches and ceiling.  After the Reconquista, much of the interior was adapted to Christian use, with a new nave and chapels.  The church portions are technically known as the Cathedral of the Assumption of the Virgin.  One of the unique features of the Mezquita is the mihrab, the prayer niche, which normally points towards Mecca.  For unknown reasons, the mihrab here points elsewhere.

The Mezquita is located at the heart of the tourist district in the center of old Cordoba, approximately one-hundred and eighty miles soth of Madrid  It is open Mondays through Saturdays from 10:00am-6:30pm and Sundays from 9:00am-7:00pm (closed for services 10:15am-2:00pm).  Admission is E6.50.  Web: www.catedralcordoba.es (official website)

In the wake of the Reconquista, the new Christian occupants of Andalusia filled its cities with magnificent cathedrals in defiance of the centuries of Islamic occupation.  The most famous and popular is arguably the Cathedral of Seville, the largest in Spain and one of the largest Christian edifices in the world.