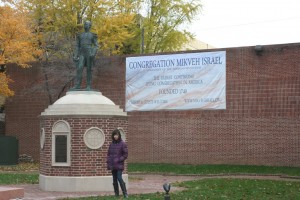 Throughout the 18th century, the British colonies in North America saw a slow but steady growth in their Jewish populations.  Although their numbers were not large prior to the Revolution, nowhere else in the world were Jews accepted with greater tolerance and equanimity than in the American colonies.  Persecution was virtually non-existent.  Because of this, the Jews of the colonies were among the earliest and most dedicated supporters of the independence movement and strongly supported it in many capacities.  Haym Salomon became renowned as the first great Jewish American patriot, and was instrumental to the initiating, sustaining and winning of the war that would eventually lead to American independence.

When revolution broke out in 1776, there were only a few thousand Jews living in the American colonies.  Most of these unreservedly supported the cause of the American patriots.  In the early years of the war several hundred Jews enlisted in the Continental army as well as the various state militias.  A few of these even rose to high rank, something which was difficult if not impossible for Jews in most other countries in the 18th century.  But as noteworthy as the Jewish contribution to the nascent armed forces of America was, it was in professional capacities, notably finance, where the Jewish Americans really made a difference to the war effort. 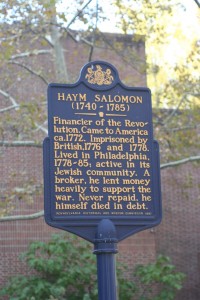 Perhaps no person of Jewish origin contributed more to the success of the American cause than Haym Salomon.  A rare Ashkenazi immigrant from Poland, the vast majority of Jews in America at that time being Sephardic Jews from South America, Haym arrived in New York in 1775 on the eve of the American Revolution.  He was a revolutionary from the outset, joining the Sons of Liberty within a year after arriving in the colonies.  His subsequent career was almost legendary.  Because of his acumen with languages, he worked as a spy, undermining the morale and effectiveness of the Hessian auxiliaries.  He was arrested on several occasions, escaping certain death each time.

In 1778, Haym Salomon’s talents were put to even better use arranging financing for the American cause.  He brokered the sale of millions of dollars worth of bills of exchange, which funded the colonial army and various militias.  Personally well off, he also contributed a notable sum of his own wealth to support the revolutionaries.  It is believed that by the time of his death, the American government owed him as much as $800,000, a staggering amount for the period.

A number of largely unsubstantiated myths have grown up around Haym Salomon.  These include his assistance in preparing drafts of the United States Constitution as well as his work on the design of the Great Seal of the United States, both of which are untrue.  But his other accomplishments were absolutely real, and by the time of his death he was one of the most honored men in America.  His efforts, and the efforts of other Jewish revolutionaries, were specifically noted by many of the Founding Fathers, including George Washington, and helped to guarantee that the rights of American citizens would be extended without reserve to the entire Jewish community.

For most of his life in America, Haym Salomon resided in Philadelphia.  When he died he was buried in the cemetery of the Mikveh Israel congregation in that city.  Unfortunately, the exact site of his grave is unmarked and unknown.  However, he is commemorated on several plaques and memorials around the graveyard.

The Mikveh Israel Cemetery is easily the most prominent Jewish cemetery of the American Revolutionary period.  It contains a veritable who’s who of American Jewish revolutionaries.  Among the other notables buried here are Benjamin Nones, who served on George Washington’s staff, and Philip Moses Russell, a surgeon in the Continental army.  Twenty-one Jewish soldiers who died in the war are also buried here.

The Mickveh Israel Cemetery is located close to the old center of Philadelphia, approximately ninety miles southwest of New York City.  The cemetery is open to visitors by appointment only.  Web: http://www.mikvehisrael.org/(official website)

The congregation Mikveh Israel of Philadelphia is the 4th oldest in the United States.  The Mikveh Israel Synagogue dates from the early 1800s.  The Gravesite of David Salisbury Franks, a Jewish officer and a close friend of Haym Salomon who achieved high rank under Benedict Arnold, is buried nearby in the Christ Church Burial Ground.  The Congregation Rodeph Shalom is the oldest Ashkenazi synagogue in the United States.