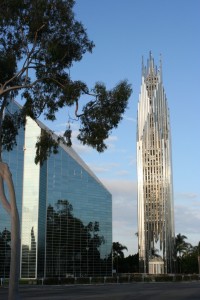 When it comes to amazing church architecture, few states can top California.  This is especially true of the state’s Roman Catholic structures.  California boasts everything, from some of the oldest and most beautiful missions in America to some of the most futuristic cathedrals ever conceived.  One of these, the famous Crystal Cathedral, essentially kicked off the new architectural trend in the 1980s.  Since then, some of California’s oldest and most historic cathedrals have been replaced by ultramodern, fantastical structures, including the Cathedral of Christ the Light, seat of the Diocese of Oakland; and Our Lady of the Angels, seat of the Archdiocese of Los Angeles.

Since the earliest days of Christianity, the grandest of all Roman Catholic churches and cathedrals consisted of an unending procession of magnificent masonry structures built to withstand the ages.  Though architectural styles changed, stone and marble remained the chief building materials right down into the 20th century.  The construction of more modern structures, built of other materials, did not being until the postwar era. 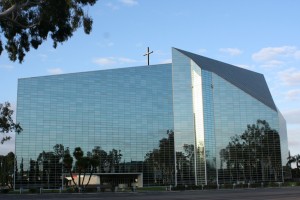 The dawn of ultramodern megachurches began in California in the 1980s with the construction of the world famous Crystal Cathedral.  Founded by the Garden Grove Community Church, a Protestant Reform congregation, the Crystal Cathedral was the brainchild of popular evangelist Robert Schuller.  Completed in 1980, it was considered one of the architectural marvels of the decade.  It served as the home of Schuller’s ministry until his death in 2006.  In 2011, the Crystal Cathedral was acquired by the Diocese of Orange County.  It is currently being renovated for use as a Roman Catholic church.

The Crystal Cathedral became an inspiration for new churches of every Christian denomination, even among the historically traditional RomanCatholic Church.  During the 1980s and 1990s, some of California’s oldest and most historic cathedrals were badly damaged in a series of earthquakes, prompting a boom in new church construction.  Among these was the Cathedral of Saint Vibiana, the seat of the Archdiocese of Los Angeles for over a century.  Heavily damaged by the Northridge earthquake in 1994, Saint Vibiana was replaced with the futuristic Cathedral of Our Lady of the Angels in 2002. 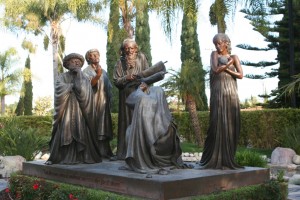 Perhaps even more famous is the Cathedral of St. Francis de Sales, which was effectively destroyed in the massive Loma Prieta earthquake which struck the San Francisco area in 1989.  Seat of the Diocese of Oakland, St. Francis de Sales was replaced by the ultramodern Cathedral of Christ the Light in 2008.  Christ the Light bears the distinction of being the first cathedral completed in the 21st century.

The Crystal Cathedral is a modern-day architectural masterpiece. The main building consists of a giant steel super-structure completely covered in plate glass which typically appears blue or bluish-white in reflection of the sky.  The exterior’s most memorable feature is the breathtaking Prayer Spire which gleams like a polished sword.  The cathedral interior consists almost entirely of a single, massive sanctuary which can seat nearly three thousand worshippers.  The centerpiece is the gargantuan pipe organ behind the pulpit.  With over 16,000 pipes it is one of the largest musical instruments on the planet.  The Crystal Cathedral is located about fifteen miles southwest of downtown Los Angeles.  Web: www.crystalcathedral.org (official website). 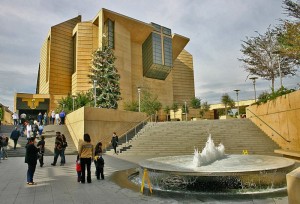 The Cathedral of Our Lady of the Angels has been hailed as both a post-modern masterpiece by fans and as an eyesore by critics.  The exterior, which is a giant, jumbled building that looks as though it were constructed by mismatched yellow legos, is famous for its lack of right angles.  Of greater interest is the interior and its treasures, which include, among other things, a piece of the relic from Our Lady of Guadalupe.  Beneath the church is a mausoleum with a number of tombs, including two particularly fascinating ones:  St. Vibiana, a third century Christian martyr whose body was relocated to California in the 20th century; and actor Gregory Peck.  The Cathedral of Our Lady of the Angels is located on the north side of downtown Los Angeles.  Web: www.olacathedral.org (official website).

The Cathedral of Christ the Light is a towering glass and steel structure.  Its shape and design were inspired by both a bishop’s mitre and a fish.  The exterior window paneling vaguely resemble a fish’s scales.  Perhaps the two most interesting features are the magnificent stained glass window behind the altar featuring a futuristic medieval Jesus; and the enormous jacuzziesque holy water font.  The Cathedral of Christ the Light is located in downtown Oakland overlooking Lake Merritt.  Web: www.ctlcathedral.org (official website). 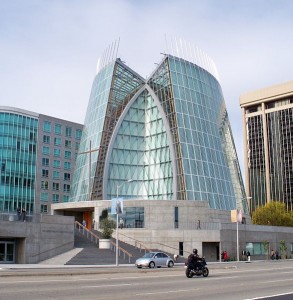 California boasts numerous other space-age Catholic churches.  In addition to the above, probably the best known is the Cathedral of St. Mary of the Assumption, seat of the Archdiocese of San Francsico.