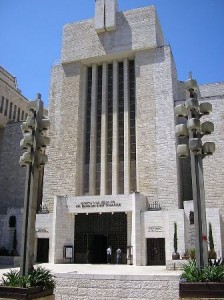 Modern Jerusalem is a sprawling metropolis with three-quarters of a million people, dwarfing the city built in ancient times.  Jerusalem is also the epicenter of two millenia of religious tension and conflict between Judaism, Christianity and Islam.  In the nineteen centuries since the end of the Great Revolt, Jerusalem has changed hands more than a dozen times.  Virtually every time the banner of a different religion was raised over the city, though the Star of David did not reappear again until the 20th century.  In the interim, Jerusalem was filled with synagogues, churches, mosques and shrines, each of which has served to increase the city’s sanctity but also its religious tensions.  Since independence, Jews have added their own architectural and cultural stamp on the city, from government buildings to memorials to museums, offering countless new pilgrimage experiences to an already inundated city.

The final defeat of the ancient Kingdom of Judea during the Bar Khokba Revolt all but put an end to a Jewish Jerusalem for the next eighteen hundred years.  With much of the city destroyed and its population dispersed, Jerusalem became a backwater of the Roman Empire.  It was not until the 3rd and 4th centuries AD that Jews began to trickle back in, though by that time Jerusalem’s population was mainly Christian.  After the Emperor Constantine’s conversion to Christianity, Jerusalem’s future as a Christian city, at least for the next few centuries, was assured.  Soon afterwards, the Byzantine Empire began erecting churches, basilicas and shrines all over the Palestine, most of all in Jerusalem.  What was left of Jerusalem’s Jewish identity was completely overwhelmed by the newcomers.

Christian hegemony was not permanent.  In the 6th century, Jerusalem changed hands twice, first falling to the Sassanid Empire, and soon after to the Islamic Caliphate.  It was not long before the Muslims began constructing their own shrines in Jerusalem, most notably the Dome of the Rock on the site where the Second Temple previously stood.  The presence of three great holy sites in such proximity to each other set the stage for a three-way tug of war for control of the city that continues to this day.  Over the next thousand years, Jerusalem came under the control, in succession, of the Abbasids, Crusaders, Fatimids, Tartars, Mamluks, and finally the Ottomans.

Throughout these long years of foreign rule, Jews were periodically allowed to reside in Jerusalem, usually with the permission of Muslim rulers.  But modern Jewish history in Jerusalem did not truly begin until the Jews of the city were allowed to restore several old synagogues in the 1830s.  By the middle of the 19th century, over seven thousand Jews had returned Jerusalem.  Around this time, the worldwide Zionist movement was beginning to gain momentum.  Jews from all over the world, primarily Central and Eastern Europe, began relocating to Palestine.  As the 20th century dawned, it began to occur to the region’s Christian and Muslim residents that this was potentially problematic.  When the British government issued the Balfour Declaration formally supporting the creation of a Jewish homeland in Palestine, many of Palestine’s existing residents became outwardly hostile towards the Zionists.

Events came to a head in the years during and immediately following World War II.  Desperate Jewish immigrants swarmed into Palestine despite all efforts of the British to stop them.  The disaster of the Holocaust forced the surviving Jews to retake their ancestral homeland whether the world was ready or not.  In 1948 independence was declared.  After four wars, or more depending on how you count, the Jews have not only overcome great odds of survival, but have carved out one of the most developed and prosperous nation in the Middle East.  Jerusalem, fiercely contested by both sides, is now roughly divided between the Jews and Palestinians, both of whom desire to see it as their own capital.  There is as yet no end to this standoff in sight.  That does not seem to deter the millions of tourists and pilgrims that descend on the city every year.

There are so many places in modern Jerusalem woth seeing that it is hard to pick even a few as representative.  Among the most noteworthy and symbolic, perhaps, is the Great Synagogue of Jerusalem.  Sponsored by the Jews of Belz and completed in 2000, the Great Synagogue is the largest in the world, with a seating capacity of over six thousand.  The ark is also the largest in the world, and is reportedly big enough to hold seventy Torah scrolls.  While the modernistic architectural style has drawn some criticism, its massive size and hill-top setting give it a majestic look and feel, a fitting atmosphere for the largest center of Jewish worship on the planet.

If the Great Synagogue is modern Israel’s preeminent religious institution, the Knesset, Israeli’s parliament, is its great political institution.  Located in Jerusalem’s Givat Ram district, the magnificent Knesset building was built in the 1960s and donated as a gift of the Rothschild Family.  Among the building’s artistic contributors was Marc Chagall.

Jerusalem is home to literally fifty or more sites of Jewish interest, from historic places to museums to synagogues to tombs.  Moreover, many of these are open sites, or heavily restricted areas, or both.  It is impossible to encapsulate all of the city’s visitor information in this book.  However, the visitor information for virtually any place in Jerusalem can be found on the city’s municipal tourism site.  The Knesset Building is open to the public via guided tours only on Sundays and Thursdays from 8:30am-2:00pm.  A passport is required to enter.  There is no cost for admission.  Web: www.jerusalemgreatsynagogue.com (official website)

Besides the Great Synagogue and the Knesset, Jerusalem is home to dozens of major modern sites of interest, including many synagogues, over a half-dozen in the Old City alone.  The most important is the Hurva Synagogue, the chief synagogue of the city for many centuries.  Destroyed several times during the various Arab-Israeli conflicts, it is again being restored at the present time.  Over a dozen major museums are located in Jerusalem.  Besides the Israel Museum, some of the most important and interesting are the Rockefeller Museum and the Bible Museum.  The most controversial is undoubtedly the Third Temple Museum, which documents the future reconstruction of the Great Temple.  The Zionist movement is both remembered and perpetuated by the World Zionist Organization and the Weizmann Institute, both of which located here.