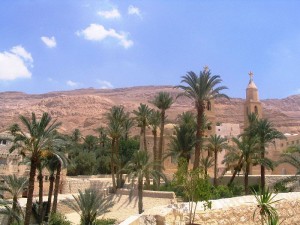 When the pious Anthony arrived on the shores of the Gulf of Suez in the 4th century in his quest for solitude and a more Godly life, little did he know that he would be initiating what would become one of Christianity’s favorite pastimes: monasticism.  A small, and by some accounts completely unwanted, following of the famous hermit later emulated his example and established St. Anthony’s Monastery, the first significant institution of its kind in the Christian world.  Followers of Anthony’s friend and fellow hermit St. Paul did the same a few years later and built St. Paul’s Monastery nearby.  Both monasteries are still in use almost seventeen centuries later, with active orders that still hold to the original traditions of their respective founders.  These now happily receive Christian pilgrims, though these are few compared to the numbers which make the trek to St. Catherines in the Sinai.

While hermits and ascetics were not new to the world of Anthony’s day, the idea of a cloistered community separate and isolated from mainstream society was as yet unknown in the 3rd century.  Until then, such communities were superfluous: Christians already lived on the fringe of society, even when they were in the majority.  But once Christianity became the dominant social institution of the Roman Empire, the wealth and power of the Church grew at an astonishing rate.  Many Christians found this development worrisome, believing that faith grew stronger through hardship.  With that in mind, men like Anthony and Paul sought a life of isolation and poverty in the wilderness on the fringe of the Empire.

Paul first arrived in the Suez region towards the beginning of the 4th century.  After being enmeshed in a family squabble over inheritance and witnessing the funeral of a wealthy man whose money meant nothing in the end, Paul renounced his worldly possessions and headed into the desert.  He went on to live for decades in a cave, eating a scant diet of bread and wearing clothes made of branches and leaves.  Towards the end of his life he befriended a fellow hermit named Anthony.  After Paul’s death, Anthony buried Paul in the robes of St. Athanasius, while several disciples of Paul constructed a small shrine near the cave where he had lived.

Anthony had actually traveled to the south of Egypt somewhat earlier than Paul.  Like Paul, his family was well off, and he too gave away his possessions in search of a life of poverty.  Although the two men lived parallel lives, Anthony was by far the more famous of the two.  He was much more active in the Christian politics of the day, and on at least two occasions traveled to Alexandria, once during the persecutions of Maximus and once to confront the Arian heresy.  At first he lived alone, but around 305 AD he took on disciples and founded his own monastery.  Eventually he left the monastery to return to isolation.  It is believed that he lived to the ripe old age of a hundred and five, and died in his cave in the presence of only one or two faithful followers.

The area around Zafarana was already a popular place for pilgrims during Anthony’s and Paul’s lifetimes.  Visitors came, seeking inspiration and enlightenment.  As the monastic movement grew throughout the empire, both monasteries became famous examples of ascetic living.  After the rise of Islam, however, they came under Muslim influence.  Both were destroyed and ransacked on several occasions.  After nearly a thousand years of Muslim domination, St. Anthony’s Monastery was reestablished and rebuilt in the 16th century.  St. Paul’s followed soon afterwards.  The current orders date back to this time.  Despite the fact that these venerable monasteries predated the days when monastic rules were formally established, these shrines are held in high regard by aesthetics of other orders, including those of Catholicism.

St. Anthony’s monastery is an impressive structure, ironically almost the anethema of Anthony’s original purpose.  Its setting at the base of Al-Qalzam Mountain and surrounding forest of palm trees give it a particularly exotic, if not romantic, look.  Its five churches and numerous additional buildings are mostly enclosed by a wall, built to keep Bedouin raiders at bay.  Most of the current monastery was built or rebuilt in the 16th century.  However the Church of St. Anthony, which is considered to be the highlight of the monastery, is much older.

St. Paul’s monastery bears a striking resemblance to St. Anthony’s.  It was also rebuilt in the 16th century by monks from St. Anthony’s, so the architecture is very similar.  St. Paul’s is somewhat larger, with greater fortifications, though the setting and landscaping are less impressive.  The original spring which St. Paul drew water from is still in use.  The centerpiece of the monastery is St. Paul’s Church, which is built on the site of the cave where the hermit once lived.

The Monasteries of St. Anthony and St. Paul are among the world’s most isolated Christian sites.  The closest city to both is Zafarana on the coast of the Gulf of Suez, more than thirty miles away, including travel on rough roads.  The two might be done as a day trip from Zafarana, or possibly even from Cairo which is more than a hundred miles away.  There is no formal visitor information for these monasteries.  However, the inhabitants are apparently accommodating to visitors.  Donations from pilgrims are probably more than welcome.  Web: None Available

Beyond the two monasteries, there is another location of notable interest in the area: the Cave of St. Anthony, which is a little more than a mile away from the monastery compound.  Located on a hillside more than two thousand feet above the Red Sea, this cave with stunning views is where St. Anthony spent the better part of his life.  Also in the region are a number of ruins of other monasteries long since destroyed or abandoned.