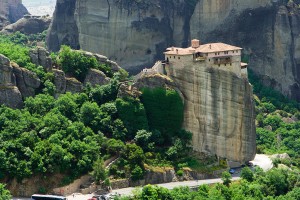 If the monasteries of Mount Athos are the spiritual heart of the Orthodox  Church in Greece, than those of Meteora are its architectural heart.  Less than one hundred miles away from Mount Athos, the monastic community of Meteora is somewhat more isolated than the former but infinitely more welcoming to pilgrims and tourists.  Moreover Meteora’s jaw-dropping collection of gravity-defying monasteries are infinitely more amazing to see, if less important religiously.  Together there are over two-dozen monasteries at Meteora, representing many different Orthodox orders.  Aside from its classical sites of antiquity, Meteora is arguably Greece’s top architectural draw.  Meteora is a UNESCO World Heritage Site.

The first known aesthetics to settle in the area known as Meteora were largely independent hermits who probably arrived sometime in the 8th century AD.  These mostly lived solitary lives in the area’s countless caves (with some inhabiting the peaks of the vertigo-inducing pinnacles of rock), and true monasticism did not significantly arrive in the area around Meteora until at least two hundred years later.  The first recorded monk at Meteora was a hermit named Barnabas, who arrived during the 10th century and established an early church and cloister there.  Over the next few centuries additional cloisters were built, and by the 12th century Meteora was fully established as a semi-autonomous monastic state along the lines of Mount Athos.

As at Mount Athos, Meteora became a magnet for religious aesthetics, and over twenty monasteries were established in the region during the late Middle Ages.  A central church was built near an enormous mountain-sized rock (the Rock of Doupiani) for common worship and use, and a First Monk was chosen as leader of the collective community.  Great Meteoron, which would eventually grow into the largest and most important of the area’s monasteries, was established in the late 1300s by monks from Mount Athos who had fled the juggernaut of the Ottoman Empire.

From the 12th century onward Meteora led a more or less parallel existence to Mount Athos.  But as the 1300s progressed, the looming threat of Islam began to drive the monks to higher ground.  The monks began to invest their considerable resources and engineering skills into the construction of new monasteries high on the mountaintops.  Many of the older and more vulnerable monasteries were abandoned, and by the time the Ottomans arrived, Meteora boasted two-dozen jaw-dropping monasteries towering as high as two thousand feet above the surrounding valleys.  The Ottomans apparently took one look at the virtually impenetrable monastery fortresses and decided it was simply easier to leave the monks alone.

Unfortunately, the extreme isolation of Meteora’s monasteries was also the community’s downfall.  Although they were safe from maurauding Ottomans, the monastaries were also effectively cut off from the outside world, and new recruits became scarce.  By the 1600s the population of Meteora had dwindled considerably.  A century later, all but six were abandoned.  According to some counts, these now have a collective population of less than a hundred.  Nevertheless, the region has enjoyed a surge of new interest in the last few decades, and though new monks are few and far between, pilgrims and other tourists now flock to the place in vast hordes.

The Meteora monastic community sprawls over nine hundred acres and encompasses dozens of mountains.  The oldest, largest and most accessible monastery is Great Meteoron.  Completed in the 1380s, this extensive complex is a somewhat confused looking jumble of buildings piled onto the top of the original Meteora Mountain.  The centerpiece is the Church of the Transfiguration, once the chief place of worship for the entire Meteora community.  While the monastery is still in active use, it now also functions as a museum and is the principal point of access to the area for visitors and pilgrims.

Second in size and importance is the Varlam Monastery.  Built in the 1540s at the height of Ottoman power, Varlam is even higher and more inaccessible than Great Meteoron.  Its superior organization can be attributed to a century and a half of experience in the unusual mountain constructions.  The central place of worship here is the 17th century Parish Church of the Three Bishops.  There is now a small museum located in the old refectory.

The monastic community of Meteora sprawls over a large region not too far outside the modern town of Kalampaka in Greece, about a hundred miles southwest of Thessalonika and a hundred and fifty miles northwest of Athens.  While Meteora is somewhat more isolated than Mount Athos, it is much more tourist-friendly and easy to visit.  Several of the monatsaries of Meteora are open daily from 10:00am-5:00pm (closed for lunch 12:30pm-3:30pm).  However, this varies substantially on a daily basis and from site-to-site.  Check in advance.  The cost of admission is usually Eu2.00 per monastery.  Web: www.meteora-greece.com  (official website of Meteora)

Of the original twenty four monasteries at Meteora, a total of six are still in use.  These include St. Stephen’s Monastery, built in the 16th century and currently used by an order of nuns (St. Stephen’s is popular among visitors for its accessibility); the Monastery of the Holy Trinity, one of the most inaccessible of the sites; the small Holy Monastery of St. Nicholas Anapausas; and the Holy Monastery of Roussanou, considered by many as the most impressive.  The Church of the Mother of God, the original 12th century principal church, is at the base of the Rock of Doupiani.