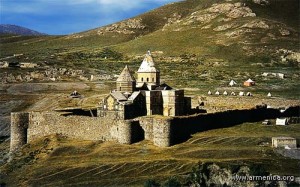 This quiet, isolated monstary located in the wilderness hinterlands of ancient Armenia is believed to stand on the site of the martyrdom and/or burial of the Apostle Thaddeus, or Jude.  It is revered by both the Oriental Orthodox and Assyrian Orthodox Churches, especially members of the Armenian Apostolic Church.  For the last three decades, the monastery has been under the jurisdiction of the Iranian government, and Christians are permitted to visit on only one day every year, the Feast Day of St. Thaddeus.  This makes the the St. Thaddeus Monastery a serous contender for the most inaccessible of all major Christian sites, and a great prize for those pilgrims who manage to visit.  The St. Thaddeus Monastery is part of the Armenian Monasteries of Iran UNESCO World Heritage Site.

It can be argued that Thaddeus was the least well-known of all of the Apostles.  The Bible says virtually nothing of him beyond his inclusion in the list of Apostles.  Even in the Apocryphal Gospels, which has more extensive, if non-canonical, stories of the Apostles, he is barely mentioned.  To make matters worse, even his identity is enigmatic.  He is only mentioned in two of the gospels, though he is usually identified as the Apostle Jude who does appear in the other two gospels.  And yet, for all of the mystery surrounding this little-known companion of Jesus, a great tradition has grown up around him.

According to legend, Thaddeus and his brethren preached throughout Palestine following the Ascension of Jesus.  Later he moved on to Libya, and then to Syria and Mesopotamia.  He eventually found his way to Armenia, perhaps in the company of either Simon the Zealot, the Apostle Bartholomew or both, where he spent the final years of his life until his martyrdom sometime around the year 65 AD.  Unfortunately, there is no way to verify this tradition, even through the use of questionable Apocryphal or even Gnostic documents.

Nevertheless the belief is very strong that Thaddeus did evangelize in Armenia, and that he died there; and of the lesser-known Apostles, the tradition of Thaddeus’ tomb is possibly the most plausible.  Actually, the largest question concerning the authenticity of the holy site is that it was actually the tomb of Thaddeus of Edessa, one of the Seventy Disciples of Jesus, who traveled into the east with the Apostle Thomas, rather than that of Thaddeus the Apostle.  Either way, it is the resting place of a very important early church figure.

According to tradition, the first church was built on the site around 68 AD, a few years after Thaddeus’ death.  Over the centuries this was replaced by a series of larger churches, including one from the 10th century and one from the 14th century.  The entire site was completely rebuilt in the 19th century thanks to the generosity of a local Muslim prince.  However, in the wake of the 1979 Iranian revolution, the local Christians were driven from the site and told not to return.  A special dispensation was permitted for pilgrims to visit only on St. Thaddeus’ feast day.  Because of this, and because of its geographic isolation, the St. Thaddeus Monastery is perhaps the world’s least visited major Christian site.

The Monastery of Saint Thaddeus is extremely isolated in every sense of the word.  It is located in the extreme northeastern corner of Iran close to the borders of Armenia, Azerbaijan and Turkey.  The setting is as Biblical as one can be imagine.  Rolling hills, dotted with tents and sheep, surround the place.  Nothing is left of the original shrine, or any other structure on the site, prior to the 10th century.  The current monastery predominantly dates from the 19th century restoration.

The monastic compound consists of a rectangular fortified wall surrounding a beautiful Armenian-style church.  The church building incorporates several of the monastery facilities, and there is little in the way of outbuildings.  Despite its relatively small size, the church has virtually no architectural competition and absolutely dominates the surrounding plain.  The exact site of the burial of Thaddeus the Apostle is unknown.

The Saint Thaddeus Monastery is very far off the beaten path.  The closest town is Maku, about ten miles away, and the nearest major city is Yerevan in Armenia.  However, daytrips from Armenia are next to impossible due to the difficult border crossing.  The nearest major city in Iran is Tabriz, more than a hundred miles away, and also difficult for a daytrip.  Any visit to the shrine will require several days travel, and should specifically target the Feast Day of Thaddeus, the only day of the year that the monastery is open to Christian pilgrims.  As of this writing, there was no other visitor information available for this site.  Web: None Available

While Iran is not particularly big on Christian sites, there are a few others along the northwestern frontier area near Armenia and Azerbaijan.  The most important, other than the St. Thaddeus Monastery, is the St. Stephanos Monastery, which shares both the architectural style and the UNESCO World Heritage Site designation with St. Thaddeus’ church.