When it comes to haunted places, many might think first of a hulking, somber mansion, or perhaps a labyrinthine abandoned hotel or insane asylum. But if you want a first rate haunted graveyard, than you really need a church. There are plenty of haunted churches in the Mid-Atlantic Region, especially in and around New York City. From Pennsylvania to Long Island, here are some of the best: 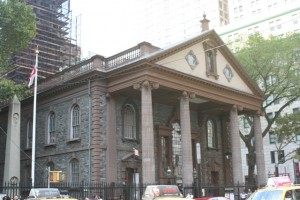 St. Paul’s Chapel in Lower Manhattan is one of New York City’s oldest and most historic churches. It has been the site of many amazing events, from the late 18th century, when George Washington prayed here the morning of his inauguration, to the early 21st century, when George Bush hosted the memorial service for the terrorist attacks of 9/11. It still serves as the de-facto memorial church for those who died at the World Trade Center in 2001.

But for New York City ghost enthusiasts, St. Paul’s is also known as one of the city’s most haunted buildings. According to local legend, George Frederick Cooke, a prominent English actor, died and was buried here in 1812. However, he was buried without his head, which had been left for study to pay a medical bill. Apparently, his ghost periodically stalks the church graveyard still looking for his skull. 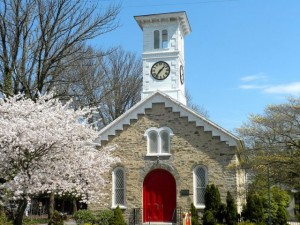 St. Stephen’s Episcopal Church is one of Mullica Hill, New Jersey’s oldest buildings. It was constructed in 1853 and replaced an earlier church that stood on a site where a skirmish took place during the American Revolution. Throughout its history, St. Stephen’s has been associated with several ghost sightings, as has the neighboring rectory building. Both the church and the rectory are stops on the town’s ghost tour.

One well known ghost known as ‘Uncle Charlie’ lives in the rectory. According to previous residents of the house, Uncle Charlie has been seen on a regular basis and is credited with assisting with household chores. A sadder tale involves a young boy who’s family was a member of the parish in the 1970s. He was hit by a car in front of the church, and parishioners attest to the boy’s periodic appearance in the church. 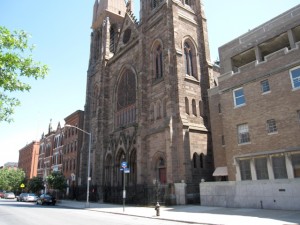 Most Holy Trinity Church in the Williamsburg neighborhood of Brooklyn is one of the most historic Catholic churches on Long Island. The third church building of the parish, the current structure was completed in 1885. Unfortunately, it was completed on the former hallowed ground of the previous church’s graveyard. According to local tradition, the bodies were not properly dealt with, and some may actually still be beneath the current building.

Not surprisingly, there are a lot of ghost stories associated with Most Holy Trinity. There are stories of tunnels and a forgotten Underground Railroad stop beneath the church, and several mysterious deaths over the years within its walls. One ghost of a former priest haunts the rectory guest rooms, while the spirit of a murdered employee walks the belltower, occasionally ringing the church bells. More than one parishioner has note the sounds of spectral footsteps when no one else has been on hand. 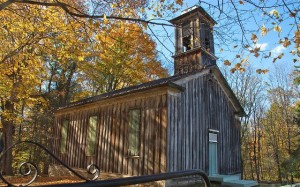 The Egg Hill Church in Potter Township is one of Central Pennsylvania’s architectural treasures. Completed in 1860, its design of horizontally installed pine-plank walls and stone foundation make it look like it should be attached to a national park lodge. Although it has not been active since the 1920s, it is on the National Register of Historic Places. But it is known throughout Central Pennsylvania for another reason.

According to a very pervasive urban legend, an unbalanced minister who served the church in the late 19th century decided to hold a Halloween night service, during which he poisoned several members of the congregation with tainted bread. He then topped off the evening by hanging himself. While there is no official record of this event having occurred it does not deter legions of the curious from visiting Egg Hill Church. 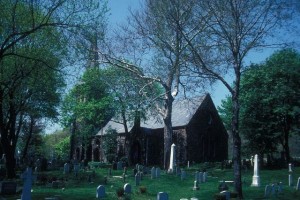 St. Andrew’s Church is home to one of the oldest Christian congregations in Staten Island. During the late 18th century, the first church on the site was closely associated with the British army which was based on Staten Island, and its loyalist congregation aided the British cause as a makeshift hospital facility. The grandfather of Elizabeth Ann Seton, the first American born Catholic saint, served as priest here, and a number of her family members are buried here.

But today St. Andrew’s is better known for its ghosts. The general belief is that the church is haunted by the ghosts of one or more British soldiers who died here during the American Revolution. It is known for unexplained phenomenon, including an organ that occasionally sounds without anyone playing it. Today St. Andrews is so popular with ghost seekers that it now hosts an annual Fright Night in October.