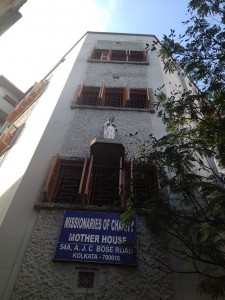 From its outside appearance, the Mother House of the Missionaries of Charity in Kolkata is one of the least likely pilgrimage destinations imaginable.  But considering the history of its founder, perhaps this is fitting.  It is very likely that this austere building may eventually come to be the most popular Christian site in Asia.  It is certainly one of Kolkata’s most beloved, if unassuming, Christian sites, and is far more than a simple place for pilgrims to visit.  The Mother House of the Missionaries of Charity is the heart and soul of one of the world’s greatest charitable organizations, and many visitors stay on to work as volunteers, making it an important center of both pilgrimage and missionary work.

Agnes Gonxha Bojaxhiu was born into a poor family in Macedonia in 1910.  Her childhood witnessed the tumultuous period that ravaged the Balkan Peninsula between the world wars.  The aftershocks of World War I and the fall of the Austro-Hungarian and Ottoman Empires turned Macedonia into a vast transit center for Greek and Turkish refugees.  These world-shaking events and the subsequent poverty and destitution had a profound effect on the young Agnes, and may have been a factor in her life’s calling.  About ten years after the war, at the age of eighteen, she formally committed her life to Christ and joined the Sisters of Loreto.  Upon taking her vows, she received the name Teresa, by which she has been popularly known as ever since.

When her training was complete, Sister Teresa was sent to Calcutta to teach at St. Mary’s High School, which she did for the next eighteen years.  However, as time went by, she became ever more concerned by the vast sea of desperate poverty that saturated the city.  She began to feel that she was called by God not as an educator, but rather as a minister to the poor.  In 1948, she finished teaching at St. Mary’s and headed for Calcutta’s slums.  After spending two years doing freelance missionary work, Sister Teresa received Papal permission to start a new order with the purpose of caring for Calcutta’s most destitute citizens.  Her order was called the Missionaries of Charity, and within a few short years it had a large following and was well known throughout the city.

Teresa and her disciples served the community with great vigor, providing food, medical care, shelter and education to as many people as could find their way to her.  By 1965 the order had grown so large, with affiliates in other countries, that the Vatican designated it as an international religious family.  By this point, Mother Teresa and the Missionaries of Charity had become known worldwide.  Over the next three decades, the order spread across the globe.  The work of the Missionaries earned worldwide praise from both Catholics and non-Catholics.  In 1979, Mother Teresa was awarded the Nobel Peace Prize for her untiring efforts.  She continued her work until the very end of her life in 1997.

From her humble beginnings working alone in Calcutta’s slums, Mother Teresa left behind an organization of nearly a hundred thousand volunteers worldwide to continue her mission.  She is recognized around the world as one of the greatest Christians of the 20th century, and is a beloved figure not just among Catholics, but also other Christians, Jews, Muslims and especially Hindus.  Her legacy was so universally recognized that the Roman Catholic Church took the extraordinarily rare step of beatifying her without the customary waiting period.  The Mother House of the Missionaries of Charity, where her body was laid to rest, already receives many visitors.

The Mother House of the Missionaries of Charity is located amid Kolkata’s poorer areas and away from the city’s major tourist sites.  Nevertheless it is easily accessible along two major boulevards for any who wish to come there.  The building itself is basic 20th century block construction, and appears to be more like a four-story office building than the headquarters of one of the world’s great missionary societies.  The only outward decoration is a statue of the Virgin Mary located on building’s corner.

The interior is similarly utilitarian.  The heart of the building is a simple courtyard used for both communal gathering and quiet reflection.  Just inside from the courtyard is the chamber where Mother Teresa lies in eternal repose.  Although her tomb is of white marble, its simple design and lack of decoration is an accurate reflection of the life of this extraordinary woman.

The Mother House of the Missionaries of Charity is not only the order’s headquarters, it is an actively working mission.  Although there was no visitor information available at the time of this writing, it is presumably open most hours.  There is no charge for admission, but donations are greatly welcome.  Web: www.motherteresa.org (official website of the Missionaries of Charity)

Besides the Mother House, Kolkata has a number of smaller posts of the Missionaries of Charity.  Despite Kolkata’s obsession with the Catholic Mother Teresa, its Christian population is still primarily Anglican, a holdover from British imperial days.  The city’s foremost Christian institution is St. Paul’s Cathedral, which has been Kolkata’s Anglican headquarters since the middle of the 19th century.  Kolkata’s oldest Christian building is St. John’s Church.