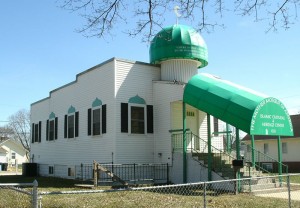 While the Islamic religion has been practiced in America since at least the 17th century, it was not until the 20th century when the first true mosques began appearing in the United States. The first known building still standing to be constructed as a mosque that was not a building acquired and converted from something else, is the Moslem Temple located in Cedar Rapids, Iowa.  Though there are older sites in America where Islam was practiced, or other places where earlier Islamic communities existed, the Moslem Temple in Cedar Rapids is generally recognized by many American Muslims as the ‘Mother Mosque’ of the United States.  Off the beaten path for casual visitors, the Mother Mosque is still highly regarded in the American Muslim community for both its historical and religious importance.  The Mother Mosque is listed on the National Register of Historic Places.

Islam arrived in what is now the United States on slave ships coming from West Africa and the West Indies.  The first known Muslim to set foot in America was Estevanico, an African slave who accompanied a Spanish expedition to New Mexico in the early 1500s.  The first shipments of African-Muslim slaves may have arrived in the port cities of South Carolina as early as the late 1500s.  It is estimated that a minimum of a quarter of a million slaves from Africa were Muslims, though this number may in fact be much higher.  Ironically, in the late 18th century the American government recognized the right of Muslims to practice their religion freely, even as the slave trade continued unabated.

Non-African Muslims began immigrating to the United States in the mid-19th century, largely ethnic Arabs fleeing persecution under the Ottomans.  These groups formed early permanent communities in such disparate locations as Massachusetts, Michigan and North Dakota.  The first known mosque in America was in fact located in Ross, North Dakota, though this building has since been replaced.  What was probably America’s second oldest mosque, in Biddeford, Maine, also no longer exists, though the cemetery is still there.

By 1900, America’s nascent Islamic community was coalescing in the big industrial centers of the Midwest, notably in Chicago, Illinois and Dearborne, Michigan; the former is believed to be the oldest continually active Muslim community in the United States, while the latter is home to the largest Muslim population in the country.  These two cities were the defacto center of Islam in America throughout most of the 20th century.  Interestingly, however, neither of those cities is home to America’s oldest mosque; that honor goes to Cedar Rapids, Iowa.

Completed in 1934, the Moslem Temple, as it was commonly called, was the first permanent building in America constructed specifically as a mosque.  Earlier mosques were either acquired, such as old churches; were not permanent; or were otherwise no longer in operation.  It remained in use for nearly four decades, when a new, larger mosque was built to accommodate the growing Muslim community.  After being sold off and left to fall into disrepair in the 1970s and 1980s, the Moslem Temple was re-acquired and restored as an historic site.  It is now a beloved architectural treasure of the American Muslim community.

The Mother Mosque of America was dedicated in February 1934, and largely dates from this time.  However, after decades of neglect it underwent a substantial renovation in the early 1990s, and is now a cultural center as well as a place of prayer.  Standing in the middle of a residential neighborhood, it looks more like a large house or small church.  The only exterior feature that truly distinguishes it is the small green dome over the door crowned with a crescent-topped pinnacle.

The tiny interior of the mosque is now given over entirely to use as a small community and information center.  It is now used to promote awareness of Islamic history, interfaith dialogue, and so on.  Unfortunately, many of the mosque’s artifacts and documents were damaged in a flood in 2008 that wrecked the basement.  As of this writing repairs to the mosque had yet to begin.

The Mother Mosque is located in a residential area just outside of downtown Cedar Rapids, approximately 180 miles west of Chicago.  It is open to both Muslims and non-Muslims.  There is no cost of admission.  Web: http://www.mothermosque.org/ (official website)

While many of America’s earliest Islamic sites are now gone, a few remain here and there, including the Muslim Cemetery of Biddeford in Maine and the Muslim Cemetery of Ross in North Dakota.  The largest mosque in America is the Islamic Center of America in Dearborne, Michigan; while the largest early mosque still in use is the Masjid Al-Sadiq in Chicago.   The defacto national mosque in America, and the largest in North America, is the Islamic Center of Washington in the District of Columbia.