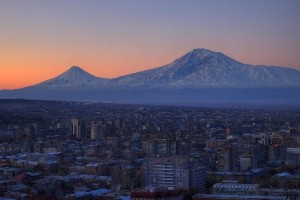 Since pre-Roman times, this enormous dormant volcano on the Turkish-Armenian frontier is held by tradition to be the landing sight of Noah’s Ark following the catastrophic flood of the Book of Genesis.  The enormous size and geographical location of this rocky formation certainly make it a worthy contender, and to date no other mountain has made a serious credible claim.  Since the mid-20th century, there have been numerous expeditions to the region, including extensive aerial reconnaissance of the mountain.  However, though there are several interesting possibilities beneath the snow and ice which perpetually cap Ararat’s peak, to date no hard evidence of the Ark has yet been found.  Nevertheless the tradition of Mount Ararat is very strong, and if true, would make it the oldest Biblical site in the world.

According to Biblical tradition, at some point in the 3rd millennium BC, God grew tired of the fallabilities of man, his own creation, and decided to lay waste to the world in a flood of epic proportions.  Many of the details of the event are vague, and even within a Biblical context the story is somewhat ambiguous.  But traditions of other cultures as well as archaeological evidence suggest that at least one catastrophic flood did occur around that time that may form the basis of the story.  Possible contenders for the source of the Biblical disaster are the massive floods that took place in the Tigris-Euphrates Valley and the Black Sea in Neolithic times.

Whatever the truth is, as the Biblical story goes, Noah and his wife were permitted to escape the devastation, along with his three sons and their wives.  The only catch was that he had to construct a boat of engineering-defying dimensions and fill it with pairs of animals representing every species on the planet.  How he accomplished these two nearly-impossible feats is left to the reader’s imagination.  But even as he finished, the flood came, and the rest is history.  Approximately forty days or one year later, depending on how the story is interpreted, the waters receded, depositing the Ark on Mount Ararat.  Noah and the other residents of the Ark remained on top of the mountain for some time, waiting until they were sure it was safe to leave.  Eventually they departed, after which the Bible does not mention Ararat again.

From earliest times, the people of Armenia have long believed that the immense volcanic cone which lies on their western frontier is the one and only Mount Ararat.   This tradition has been asserted since antiquity, and amazingly, there is considerable geographic and archaeological evidence that support the claim.  Even the Bible suggests clues.  Ararat lies northwards of the headwaters of the Tigris and Euphrates Rivers, which puts it in the area of the Garden of Eden, the only place mentioned in the Bible before the flood.  It is also a reasonable geographic starting point from which Noah and his descendents might have migrated down these rivers to Ur, the first place mentioned in the Bible after the flood.

Modern day investigations of the mountain have not ruled out the possibility of Ararat’s identity, though few conclusive facts have been established.  In 1949, a U.S. Air Force reconnaissance flight identified something known as the Ararat Anomoly, an unusually large and straight ridge lying beneath the mountain’s snowcap.  Some believe this may be the remains of Noah’s Ark.  Subsequent expeditions have revealed little hard evidence.  Another theory of the Great Flood suggests that it occurred in the Black Sea region, and its survivors merely fled past Eastern Anatolia on their way to the safety of Mesopotamia.  Either way, Mount Ararat on the Armenian-Turkish border seems to have played a role in the event.

Mount Ararat looms above the landscape of Turkey’s extreme eastern frontier only a few miles from the border of Armenia.  The mountain actually consists of two peaks, both rising from the same base: Mount Ararat proper (16,946 feet) and Little Ararat (12,782 feet), both dormant volcanoes.  Both of these are accessible to climbers, though the slopes are steep, and Mount Ararat’s upper reaches are perpetually capped in snow and ice.

At least two places in the area have been identified as possible resting places of Noah’s Ark.  The first is the Ararat Anomaly, which lies under the ice on the western slope of the mountain, approximately 1,000 feet below the peak.  A second possibility is the Durupinar site, which is actually on another mountain a few miles to the south, at an elevation of about 6,500 feet.  However, hard evidence at both locations is lacking.

Like a great tempting mirage, Mount Ararat seems closer to approaching travelers than it actually is.  Visiting requires a solid day trip from either Dogubayazit, approximately forty miles to the south.  The closest major city is Yerevan in Armenia, approximately eighty miles away, but the border crossing between Turkey and Armenia can be tedious.  All approaches to the mountain will require at least some driving on rough roads.  Other difficulties in visiting Ararat include the Turkish authorities, who have been known to severely limit access to the site in the past; and the often frigid weather, which limits most tourists to visit in the Summer months.  As of this writing, camping and climbing on Mount Ararat require a guide and a permit.  It is otherwise an open site.  Web: www.goturkey.com (official tourism website of Turkey)

There is little in the way of other Old Testament sites in this remote area.  However, as the Garden of Eden was supposedly located near the headwaters of the Tigris River, it may have once stood in what is now southeastern Turkey.  Please let me know if you come across it.