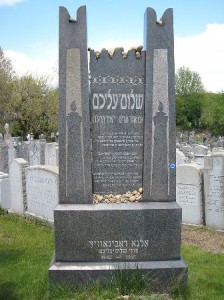 As New York City evolved into a major center of world Judaism in the early 20th century, it became home to a vibrant Jewish culture that played an integral role in the development of contemporary America.  New York Jews thrived in every profession, including finance, law, medicine, academia and countless other areas.  However, it is for its contribution to the arts that the Jewish community of New York is most famous.  This was true above all in literature and theater.  New York City produced some of the greatest Jewish writers and entertainers of the late 19th and early 20th centuries.  Many of the gravesites of these luminaries of the arts can now be found in the Mount Carmel Cemetery and other graveyards in what is sometimes referred to as the Cemetery Belt outside of Glendale in Queens, New York.

By the middle of the 19th century, the burgeoning population of Manhattan Island forced civic leaders to pay closer attention to the organization and layout of the city.  Among the early ordinances passed was a ban on the creation of any new cemeteries, which took effect in 1850.  The city’s major religious institutions were forced to look elsewhere for cemetery sites, often settling on the large, empty tracts around Glendale a few miles away in Queens.  In the years since, Glendale and its neighbors became home to more than twenty major burial grounds, including over a dozen Jewish cemeteries.  This area is now collectively known as the Cemetery Belt.

Around the same time as these new cemeteries were being established, new waves of Jewish immigrants were arriving from Europe.  Although they were not the only group to arrive at this time, they were collectively the largest.  Many, especially those who arrived from Germany and Cental Europe, came to America highly educated, with members of virtually every profession and occupation imaginable.  Despite their strong cultural identity, no other immigrant group assimilated as quickly as the Jews.  By the late 1920s, New York’s Jewish community was very large and integrated into virtually every niche of city life.

In no area was this more true than in the arts.  The list of Jewish artists, writers, composers, musicians and performers that grew out of this period is beyond count.  The Jews virtually invented vaudeville, and by extension New York’s theater community, and later the movie industry.  At its height, the New York Jewish entertainment and literary community boasted such luminaries as the Marx Brothers, Henny Youngman, Edward G. Robinson, Burt Lahr, Sophie Tucker, Fannie Brice, Harry Houdini, Jerome Kern, Irving Berlin, George and Ira Gershwin, Richard Rogers, Oscar Hammerstein and Sholem Aleichem, to name just a few.

In the 1930s, America’s center for entertainment moved from New York to Los Angeles, and New York’s Jewish entertainment community migrated west.  But in most respects the heart and soul of this group never left New York.  Some did stay, and many of those who did leave eventually returned to the New York City area to live out their retirement.  As that great generation of artists passed on, the Cemetery Belt began to fill with their gravesites.  Collectively these cemeteries boast an essential who’s who of New York Jewish society in the late 19th and early 20th century, and remain popular to this day for those who wish to be interred close to such entertainment and literary legends.

Mount Carmel Cemetery is just over a century old, and to date there are approximately eighty-five thousand people buried here.  It boasts the most impressive collection of prominent Jewish American gravesites of any cemetery in the country.  The most famous grave is that of the writer Sholem Aleichim, whose funeral was one of the largest in New York City’s history.  Five members of the famous Adler acting family are buried here, as are the vaudeville-era Samuel and Minnie Marx, parents of the Marx Brothers.  Also to be found here is the grave of Henny Youngman, one of the greatest entertainers of the Borscht Belt era.

Mount Carmel Cemetery is located in New York City’s burough of Queens, just south of the suburb of Glendale and approximately five miles west of Downtown Manhattan.  The cemetery is an open site.  Its public hours are 8:00am to 4:00pm daily (closed on Saturdays and some Jewish holidays).  Admission is free.  Web: www.mountcarmelcemetery.com (official website)

Mount Carmel Cemetery is just one of over a dozen major cemeteries that constitute the Jewish Cemetery Belt.  These include the Mount Hebron, Montefiore, Union Field, Beth Olom, Mount Lebanon, Mount Zion, Linden Hill, Mount Judah, Beth El, Mount Neboh and Machpelah Cemeteries as well as others.  The roll of famous American Jews buried in these cemeteries is too numerous to list here.  Among those that are best known are a trio of world-famous entertainers: Bert Lahr, who is buried in Union Field; Edward G. Robinson, who is buried at Beth El; and Harry Houdini, who is buried at Machpelah, and whose grave is a pilgrimage destination for stage magicians of all faiths.  Emma Lazarus, one of America’s most famous poets, is buried in the Beth Olom Cemetery.  Some of the members of the Guggenheim family, patrons of the arts and culture in New York, are buried in the Salem Fields Cemetery in Brooklyn.