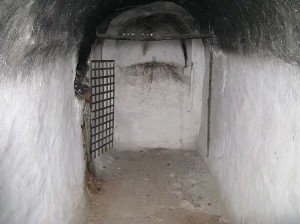 The lost city of Petra was one of the great archaeological finds of the early 19th century.  This magnificent city, hewn from the rock of the surrounding towering cliffs, is one of the world’s most unique architectural treasures.  While it is primarily known for its Nabataean, Roman and Byzantine ruins, its importance as a religious pilgrimage site is underscored by the fact that the Israelites passed through the area during their Exodus from Egypt approximately three and a half thousand years ago.  According to tradition that predates the Roman period, the Israelites left behind the tombs of two very prominent Biblical personages who died towards the end of the Exodus: Moses’ siblings Aaron and Miriam.  The antiquity of these two tombs is such that of the great Biblical gravesites, only those of the patriarchs are older.  Petra is a UNESCO World Heritage Site.

Like many of the cities in the region south and east of the Dead Sea, Petra was inhabited long before recorded history.  By the time the Israelites arrived here sometime around the 14th century BC, Petra and the surrounding area was inhabited by the Edomites, tribal descendents of Esau, the brother of Jacob, and thus distant cousins of the Israelites.  By this time the Israelites had already endured most of their forty-year sojourn, and many of the older exiles were dying out.  It is likely that many of the former slaves passed away in the shadows of Petra’s looming cliffs.

One of those who died on the journey was Moses’ older sister, Miriam.  According to the Bible she died before Aaron, and Moses chose a high place in the valley for her burial.  Her tomb lies beneath or near the Al Deir Monastery.  According to some Biblical references, Aaron died not too much later on Mount Hor, though the details regarding his death and burial are unclear.  One account suggests that Mount Hor was located in or near Petra, while others believe that it was located elsewhere, and that the body was transferred to Petra after his death so that he could be buried in the same locale as his sister.  In either case, his tomb is located at the top of Jabal Haroun in Petra, just beyond Miriam’s mountain.

Sometime around the 5th century BC, Nabataean nomads arrived in the area, probably fleeing from invading Babylonians.  They merged with the Edomites living here, and seeking a secure place for their capital, chose Petra.  Because of its access to the overland trade routes with the Red Sea, it became commercially prosperous.  Over the next few centuries, Petra passed from the Nabataeans to the Romans.  However, after the Roman Empire was Christianized, the importance of Petra waned.  The advent of Islam accelerated this process, which is unusual considering Petra’s strategic location between the Holy Land, Damascus and the pilgrimage routes to Mecca and Medina. Petra experienced a brief revival during the crusader period, but was abandoned soon afterwards to Bedouin nomads.

During the 20th century, adventurous travelers began to rediscover the wonders of Petra.  Because of its long isolation, Petra still remains much as it was in the Byzantine era.  The uniqueness and antiquity of the site have made it an ideal exotic movie location, and it has been featured in several films, most famously in Indiana Jones and the Last Crusade.  After recently being voted as one of the New Seven Wonders of the World, Petra is fast becoming one of the most popular tourist destinations in the Middle East, and is by far the most visited Biblical site in Jordan.

The area around Petra is dominated by hills and rocky prominences, with the tombs of Aaron and Miriam located on the tallest, Jabal Haroun, or Aaron’s Mountain.  A well-worn trail leads up the hill from the main city ruins.  A good distance up the hill, almost at the top, is the Ad-Deir Monastery, though whether the small building was ever actually used as a monastery is questionable.  Originally a Nabatean structure which predates the Roman period, the current shrine was built over an earlier site which purportedly contains the Tomb of Miriam.

The path continues up the hill near the monastery.  It runs to the peak, which is crowned with a small but brilliantly white dome-crowned mausoleum.  This is the Tomb of Aaron, Petra’s most sacred building.  It is sometimes mistaken for a church, but is in actuality a mosque dating back to the 14th century.  The outer architecture appears very church-like.  In fact, there are few obvious oriental features, and other than fresh whitewash, the building appears as though it dates from pre-Roman times.

The Ruins of Petra are a vast archaeological site located deep in the southern wilderness of Jordan, approximately one-hundred and fifty miles south of Amman and a hundred miles north of Aqaba.  The extensive grounds are accessed through a central visitor center.  Jabal Haroun, where the tomb of Aaron is located, is more than a two-mile hike from the visitor’s center over somewhat rough terrain, so those planning to visit should be prepared to spend several hours just getting to and from the site.  The Petra archaeological site is open year-round from 6:00am-6:00pm.  The cost of admission is JD21.00.  Web: http://visitpetra.jo (official website)

The spectacular, unique city of Petra seems as if it has been lifted entirely out of a Hollywood backlot.  In addition to the tombs of Moses’ siblings, the city is loaded with sites of Judeo-Christian interest.  The most interesting, from a Biblical perspective, is the Spring of Moses, one of many watering holes that dot the route of the Israelite Exodus.  There are also numerous ruins dating back through the various Christian periods, including a Crusader Citadel.