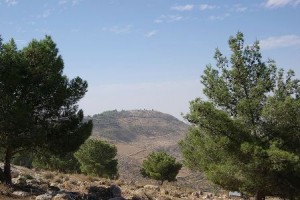 Moses, the great leader and prophet of the Israelites, ended his illustrious career on the top of Mount Nebo, a stone’s throw away from the Promised Land.  According to the Bible, it is also the last place he was ever seen, for he ascended directly to Heaven, one of the only Biblical figures to be so honored.  Despite the fact that the site is considered to be a sacred place by both Jews and Christians, little effort was ever made to establish either a major settlement or shrine here.  A pre-Islamic church once stood upon the mountain, but that is long gone.  Because of this, visitors to the site can experience the untainted view of the land across the Jordan River almost as Moses once did.

In the aftermath of the Golden Calf incident at the base of Mount Sinai, the Israelites were condemned to wander the wilderness for forty years, until all who had sinned in the eyes of the Lord died out.  For Moses, already an old man at the outset of the great adventure, the additional years of wandering were literally a life sentence.  He spent the better part of this time leading the Israelites from encampment to encampment at the agonizingly slow pace of approximately five to ten miles per year.  Moses spent these tedious years in the wilderness listening to the Israelites complain about everything from food and water to their timidity regarding entrance into Canaan.

Strangely, after everything he had done for the Israelites, God denied Moses entrance into the Promised Land.  Ostensibly this was because Moses had failed to follow God’s command to the letter in the matter of preparing a spring for the Israelites.  This incident and Moses’ subsequent punishment are among the oddest moments in all of Biblical literature, and its meaning has been debated by academics and theologians for centuries.  Whatever the reason for it, Moses reached the peak of Mount Nebo, gazed across the Jordan River, but went no further.

There are several traditions regarding Moses’ final demise.  The most popular is that Moses simply departed the encampment on Mount Nebo alone and died, and his body was buried in a secret place by the Lord personally.  A similar tradition suggests that he simply ascended to the Heavens.  A more secular view holds that he was indeed buried on the mountain in secret by a handful of his most trusted followers.  Muslims believe that his body was carried across the Jordan and buried just on the other side near Jericho.

The fact that Moses was the greatest of all Jewish prophets did not seem to occur to the Israelites at the time.  Apparently no effort was made to enshrine or memorialize the place where he died.  Not even a Levite sanctuary city was established at Mount Nebo.  Byzantine Christians did erect a series of churches at Nebo, the existing one dating from sometime in the 6th century AD.  In recent years Mount Nebo has once again become a major destination for pilgrims, and though less visited than his brother’s tomb at Petra, the departure point of Moses is considered the most sacred Jewish site east of the Jordan River.

Mount Nebo consists of a long ridge a few miles east of the Jordan River not far from where it empties into the Dead Sea.  Its greatest height is just under 2,700 feet, and it is believed that it was from this highest point that Moses looked out over Canaan.  The view is still impressive.  On a good day, a large swath of the Holy Land from the Jordan River to Jericho and beyond can be seen.  Other than a few odd structures, the view remains largely untainted from its ancient, natural splendour.

The Moses Memorial Church, the 6th century Byzantine chapel on top of the mountain, is one of the oldest and best preserved churches east of the Jordan River.  An olive tree near the chapel was planted in 2000 by Pope John Paul II.  Also nearby the chapel is the Brazen Serpent Monument, a modern-day sculpture modeled after Moses’ famous brazen serpent which protected the Israelites from snakes during their years of wandering in the wilderness.

Mount Nebo is (relatively) easily accessible, lying south of the main road between Jordan and Israel, about fifteen miles southwest of Amman.  While the mountain is technically an open site, the peak and the Moses Memorial Church require admission.  They are open April through October from 5:00am-7:00pm, and November through March from 7:00am-5:00pm.  Cost of Admission is JD0.50.  Web: www.visitjordan.com (official tourism website of Jordan)

Other sites related to the Israelites crossing the Jordan into Canaan are noted in the section on Jericho.  On the Israeli side of the river, south of Jericho, is the Hill of Moses, where Muslims believe an angel of God buried Moses’ body.  The Mosque of Nabi Moussa stands on the traditional Islamic site of his grave.