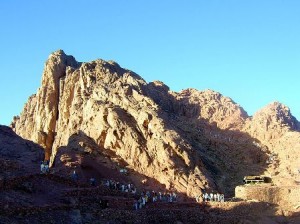 Mount Sinai, also called Jabal Musa by the local Bedouins, is the site traditionally identified as the Biblical Mount Sinai, and has been unofficially recognized as such by a majority of Jews, Christians and Muslims for many centuries.  It is a place highly revered by all three faiths, and because of its out-of-the-way location in the southern Sinai Peninsula, has long escaped the wars and tribulations that have frequently ravaged the majority of holy places in the Middle East.  The main site is the mountain itself, and a pilgrimage here is not complete without a hike to its top.  The area in the immediate vicinity of Mount Sinai is sprinkled with a number of other Biblical shrines, including the venerable St. Catherine’s Monastery.  St. Catherine’s Monastery and Mount Sinai is a UNESCO World Heritage Site.

Mount Sinai makes its first appearance in the Bible when Moses crossed the desert and found his way there after his expulsion from Egypt.  At the end of his forty-day journey in the wilderness, he made the acquaintance of Jethro, a Bedouin sheik, and subsequently married his oldest daughter.  Years later, while attending his flocks, Moses chased a stray sheep up the mountain, only to come across a certain fabled Burning Bush.  This was followed by the most famous divine audience in history, in which God ordered Moses to return to Egypt and lead the descendents of Israel to freedom.  What ensued was the most spectacular series of events and miracles that appear in the Hebrew Bible.

Upon securing the freedom of the Israelites, Moses led them on a tedious journey through the wilderness, finally arriving at the base of the Mount Sinai with hundreds of thousands of followers in tow.  There they made a great encampment while Moses spent forty days on the mountain receiving God’s law in the form of the Ten Commandments.  Unfortunately, the short-memoried Israelites got impatient and began to break the commandments almost immediately.  The ensuing wrath of God left them wandering in the desert for another forty years.  After their departure from the Sinai wilderness sometime in the 15th century BC, the holy mountain was effectively abandoned to the Bedouin nomads.  There are few further mentions of Mount Sinai in the BIble, and there is no historical evidence that any attempt was ever made by the Israelites to return or establish a shrine here.

It was another eighteen centuries before the search for Mount Sinai resumed.  Early in the 4th century AD, the Byzantine Christians began taking an active interest in the holy sites of the Old Testament.  Exploratory efforts identified the location of Mount Sinai, possibly based on the traditions of the Bedouin nomads who still lived in the area, and built St. Catherine’s Monastery here in order to accommodate pilgrims.  During the Muslim expansion of the 6th and 7th centuries, the area of Mount Sinai came under Islamic influence.  However, a special dispensation attributed to Mohammed himdelf allowed the Orthodox Church to remain at St. Catherine’s.  This verbal agreement has continued more or less until the present day, and throughout the years since, the site has been pretty much left alone.

Mount Sinai and its environs appear much today as they have for many centuries.  The isolated location, combined with the inhospitability of the land, have left the area largely uninhabited and pristine.  And though the area is becoming increasingly popular with religious pilgrims, it is still more or less off the beaten path.  Of all of the great Old Testament Biblical sites, Mount Sinai is quite possibly the most perfectly preserved and the most authentic ancient Jewish pilgrimage experience.

At 7,498 feet, Mount Sinai dominates the surrounding plain.  The terrain of the mountain is rugged, with virtually no vegetation except for the occasional patch of scrub-grass.  Its summit can be reached by the famous Steps of Repentance, a series of nearly four-thousand stone-carved stairs that meander past a series of chapes and shrines on their way to the mountain’s peak.  The climb begins at St. Catherine’s Monastery and runs past the Spring of Moses and the Spring of Elijah.  Towards the top of the mountain are two structures: the Chapel of the Holy Trinity and a small mosque.  The latter is located on the site of a cave believed to have been used by Moses during his forty days on the mountain.

St. Catherine’s Monastery is both a Jewish and Christian treasure.  Parts of the complex date back to the early 4th century and are still in use, making St. Catherine’s one of the world’s oldest continually active churches.  Because the site has gone undisturbed for nearly seventeen centuries, the monastery now preserves one of the greatest collections of early religious writings and art in the world.  Also located on the premises of the monastery is the Garden of the Burning Bush, home to a questionable descendent of the shrub of Biblical fame.

Mount Sinai is a good two-hundred and fifty mile overland journey from Cairo via the city of Suez, a day or more journey over rough roads.  The mountain’s remote location and harsh climate can make any visit a challenge, though tourism infrastructure to the increasingly popular pilgrimage site is improving by the year.  On the plus side Mount Sinai is an open site and can be visited year-round.  Hiking to the top can take anywhere from a few hours to the better part of a day, though camping is permitted (plan ahead!)  The monastery, where the Garden of the Burning Bush can be found, is open Mondays through Thursdays from 9:00am-noon.  There is no charge for admission to either the mountain or the monastery.  Web: www.sinaimonastery.com (official website)

El-Raha, the plain at the base of the mountain, contains a number of places of interest related to the Moses saga, as it is believed to be the location where the Israelites made camp after crossing the Sinai wilderness.  A Byzantine shrine, the Chapel of the Golden Calf, marks the spot where the infamous idol of the Golden Calf once stood.  A small memorial marks a Tomb of Aaron, one of two possible burial places for the brother of Moses.