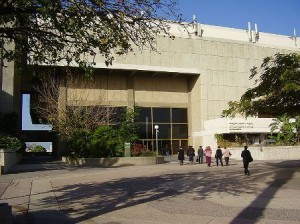 Museum of the Jewish People (wikipedia.com)

The city of Tel Aviv is the cultural capital of Israel and, with the possible exception of New York City, Judaism in general.  Tel Aviv is the heart of everything secular in Israel, from commerce to recreation to sports to the performing arts.  Boasting more than sixty museums, Tel Aviv has among the highest number of museums per capita in the world, including some of Israel’s largest and most prestigious.  The city’s three greatest such institutions are arguably the Tel Aviv Museum of Art, the Beth Hatefitsoth Museum and the Eretz Yisrael Museum, all of which have become must-sees for any visitor to Israel.  Several of the museums are part of the White City of Tel Aviv UNESCO World Heritage Site.

When the early city planners of Tel Aviv began to design their dream city in 1909, they envisioned a city of architectural beauty and culture that would be unrivaled in Palestine, if not the entire Middle East.  It is therefore not surprising that museums were destined to play a major part in Tel Aviv’s international appeal.

The Tel Aviv Museum of Art was the first major museum established in the city.  First opened in 1932, it predated even the Rockefeller Museum in Jerusalem by a few years.  The Tel Aviv Museum of Art began as a small collection housed in the former home of Meir Dizengoff, the first mayor of Tel Aviv.  This building, now known as Independence Hall, was the location where Israel’s Declaration of Independence was adopted.  The museum was moved to a sprawling new complex in 1971.  It has since acquired one of the world’s foremost collections of modern art, featuring works of both Jewish and non-Jewish artists, including several pieces by Marc Chagall.

Opened in 1953, the Eretz Israel, or Land of Israel, Museum was the first major museum established in Tel Aviv after independence.  Somewhat akin to museums of the Natural History genre, it was also the country’s defacto national museum until the opening of the Israel Museum in Jerusalem in the 1960s.

The Eretz Israel Museum was joined in 1978 by Tel Aviv University’s Beth Hatefutsoth Museum of the Diaspora in 1978, a spectacular history museum which recounts over two thousand years of the Jewish experience.  Together the Museum of Art, Eretz Israel Museum and Beth Hatefutsoth Museum have formed the backbone of Tel Aviv’s ever-growing museum and cultural community since the middle of the 20th century.

The Tel Aviv Museum of Art is the largest institute of its kind in the Middle East.  It houses a diverse collection of modern art from all over the world.  Among its many prominent patrons was Peggy Gugenheim, who donated a substantial collection in the 1950s.  A short list of the artists whose works are on display are Marc Chagall, Gustav Klimt, Henri Matisse, Claude Monet, Pablo Picasso, Pierre Renoir and Vincent Van Gogh.  The museum is open Mondays, Wednesdays and Saturdays from 10:00am-4:00pm; Tuesdays and Thursdays from 10:00am-10:00pm; and Fridays from 10:00am-2:00pm.  As of this writing, the cost of admission was not available.  Web: www.tamuseum.com (official website)

The Eretz Israel Museum is home to a strange assortment of artifacts, from glass and pottery exhibits to coin and stamp collections.  Among its most popular halls in the museum is the Nechustan Pavillion, which houses exhibits on the mining and production of copper and other metals in ancient Israel.  It includes a reconstructed copper mine from Solomon’s day, as well as a Midianite Temple.  The museum is also home to Israel’s largest planetarium.  The Eretz Israel Museum is open Sundays-Wednesdays from 10:00am-4:00pm; Thursdays from 10:00am-8:00pm; and Fridays from 10:00am-2:00pm.  Admission to the museum is NIS38 for adults, NIS26 for children.  Web: www.eretzmuseum.org.il (official website)

Located on the campus of Tel Aviv University, the Beth Hatefutsoth Museum is more of an historical and cultural educational institution than a traditional museum.  Its exhibits consist primarily of visual presentations and interactive displays which tell the story of the Jewish people throughout the ages.  The museum is open Sundays-Tuesdays & Thursdays from 10am-4pm; Wednesdays from 10:00am-6:00pm; and Fridays from 9:00am-1:00pm.  As of this writing, the cost of admission was not available.  Web: www.ilmuseums.com (website of Israel’s museums)

Tel Aviv is home to scores of other museums and cultural attractions.  Among the city’s other highlights are the Batey Haosef Museum and the Palmach Museum, both of which chronicle different facets of Israel’s modern military history.