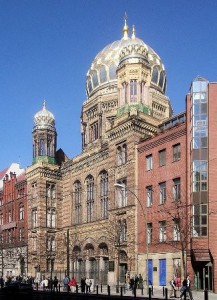 It is ironic that one of the greatest synagogues to survive the Holocaust stands so close to the center of Berlin, the capital of the most violently anti-Semitic empire the world has ever seen.  While the Jewish community of Berlin was neither Europe’s oldest nor its largest, as many other Jewish communities throughout Central and Eastern Europe surpassed Berlin in both categories before the war, the surviving synagogue and Jewish cemetery are somehow more poignant and spiritually touching than any others still standing.  Over the last few decades Berlin’s New Synagogue has been magnificently restored and has become a symbol of the triumph of humanity over religious intolerance.

The Jewish community in Berlin dates from around the 13th century AD.  Despite the fact that the Germans were less welcoming of the Jews than their Slavic neighbors to the east, Berlin’s Jewish community became quite sizeable, numbering in the tens of thousands by the 16th century.  However, the advent of the Protestant Reformation in Central Europe boded ill for Germany’s Jews.  After centuries of reasonably peaceful coexistence, the Jews of Berlin and other cities around Central Europe were suddenly subjected to ever increasing anti-Semitic sentiment.

Throughout Europe in the 16th century, the process of separating Jews from their Christian neighbors intensified.  However, in many cases the concentration of Jews in ghettos merely resulted in the creation of upscale, professional neighborhoods which only further encouraged anti-Semitic rhetoric.  In Berlin the Jews maintained their vibrant culture, especially during Europe’s religious renaissance in the wake of the Napoleanic Wars.  The New Synagogue dates from this time.

After World War I, Germany faced a devastated economy and the threat of a communist takeover.  An angry Adolf Hitler took the opportunity to build a political party that blamed both of these problems on the Jews.  The result is well known.  On November 9, 1938, on a night that will forever be remembered as the Kristalnacht, or Night of Shattered Glass, much of the city’s Jewish property was wantonly destroyed.  Some of the first terrors of the night took place at the New Synagogue.  The persecution of Berlin’s Jews did not come to an end until the city’s entire Jewish population was deported.  What was left of the Jewish Quarter was spared from systematic destruction at the hands of the Nazis due to the foresight of the architecturally-minded chief of police and lack of available manpower.

At the end of the war in 1945, most of the Jewish quarter was in ruins, along with the rest of the city.  The Berlin Jewish community, which may have numbered over a hundred and fifty thousand at the beginning of Hitler’s regime, was all but wiped out.  Only a trickle returned during the communist era, but these few made every effort to preserve what they could.  After the reunification, many more Jews returned, and a major effort was made to restore portions of the Synagogue.  The piles of rocks on the tombstones of the cemetery next door bear witness to the large number of pilgrims that now visit the sacred place.

The New Synagogue, once the largest and most beautiful in Germany, was constructed by Berlin’s wealthiest Jewish families in the 1860s.  It was a showpiece of the Jewish community, and a natural target for the Nazis when Hitler came to power.  Built in a magnificent Moorish style, the façade features intricate stonework.  The whole is crowned with a great golden dome and two smaller flanking domes.  However, these were mostly reconstructed in the 1980s and 1990s.  The new cornerstone was laid down in 1988 on the fiftieth anniversary of the Kristalnacht.

In its day, the New Synagogue could seat over three thousand congregants.  Now it is little more than a shell.  Eight marble pillars mark the location where the ark and its torah scrolls once stood.  The interior is now primarily occupied by the Centrum Judaicum, a museum dedicated to the synagogue and the old Jewish community.  Located next door to the New Synagogue is the remnant of an old Jewish cemetery.  Largely vandalized during the Nazi era, the memorial stones are little more than a collection of surviving monuments for display.

The New Synagogue is located on the east side of the city center close to many of the city’s museums and historic sites.  Since the city’s reunification, the New Synagogue has been fully restored and now houses a small museum on the history of the Jews in Berlin.  It is open daily (except Saturdays) at 10:00am.  Closing times vary.  Admission is Eu5.00.  Web: www.berlin.de (official tourism website of Berlin)

Despite Berlin’s spectacular rebirth in the 1990s, it is difficult for this city to escape the ghosts of the Nazis.  The Street of Tolerance, once dedicated to the city’s religious diversity, became the Street of Death during the Hitler era.  A memorial in the Bebelplatz marks the location where Jewish and other banned literature was consumed during the famous book burnings.  The city’s Jewish Museum is a refreshing tribute to Jewish life throughout German history rather than Jewish death in the Concentration Camps.  The Jewish Community Center of Berlin stands on the site of the former Fasanenstrasse Synagogue which had been visited in the 19th century by Kaiser Wilhelm and which was burned to the ground on Kristalnacht by the personal order of Goebels.