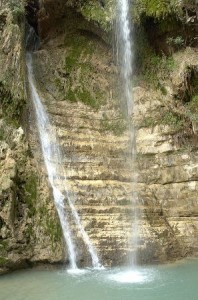 The Ein Gedi oasis has been described by visitors as one of the most beautiful places in the Holy Land.  Close to the Dead Sea and surrounded by the desert, Ein Gedi is an island of life in the wilderness.  The oasis was well-known to the Israelites in ancient times, and is famously associated with the life of King David, who took refuge in a nearby cave while he was in hiding from the jealous King Saul.  Pilgrims have come to visit the cave since the days of the kingdom of Judah.  Long uninhabited except for a relatively modern kibbutz-settlement, the Ein Gedi oasis and surrounding area is now part of the popular Ein Gedi National Park.

The area of the Ein Gedi oasis has probably been inhabited since pre-Abrahamic times, though little is known of any Canaanite settlements prior to the arrival of the Israelites.  Because of its proximity to Hebron, it was almost certainly known to Abraham and the Patriarchs living in the Negeb Desert.  Ein Gedi is first mentioned in the Bible in the Book of Joshua as the site of a town assigned to the territory of the tribe of Judah.  Other Biblical accounts mention that Ein Gedi was a fishing village, and was probably an important stopover point for caravans and travelers coming to the Judean heartlands from the southeastern wilderness.

Ein Gedi is most famous for its role in the story of David.  In the years following his triumph at the Battle of Elah, David became a national hero, and took service with King Saul.  Unfortunately for Saul, David became a little too popular with his court and with the Israelites in general.  Eventually Saul, consumed with jealousy, turned against David and decided to have him killed.  David, forewarned, fled into the Judean wilderness with a small band of followers.  Saul tracked him with his own soldiers, intent on David’s death.  Eventually both arrived near the Ein Gedi oasis.

The oasis was an important area in the tribal territory of Judah, and it is possible that it served as a retreat of sorts for the tribal leaders, judges and priests.  It was probably better known to David, a native Judaite, then to Saul.  When David arrived, he and his men retreated deep into one of the area’s caves.  Saul and his soldiers arrived soon afterwards, and though they searched the cave, they failed to find David.  When he was presented with the opportunity to kill Saul, David, unseen, merely cut a piece from Saul’s robe.  Later, he emerged from the cave and presented the torn piece of cloth to Saul as proof of what he could have done.  Saul, humbled, was convinced that David was not his enemy, and the two men were reconciled for a time.

Ein Gedi is mentioned several other times in the Bible.  Solomon wrote of it in the Song of Solomon, mentioning the oasis’ palm trees and vineyards.  It was also the gathering place for the armies of Moab and Ammon when they invaded Judah in the 9th century BC.  For a time Ein Gedi seemed to have escaped the worst of the carnage brought upon Israel by successive waves of conquerors, but its luck ran out in the 6th century AD when the Jewish settlement was destroyed by a punitive expedition of the Byzantine Empire.  Afterwards it remained largely uninhabited until the restoration of Israel in the 20th century.

Ein Gedi National Park is a large reserve that includes both the oasis and some of the surrounding desert.  The scenery boasts a rugged, rocky landscape, caves, fresh-water pools and waterfalls.  The entire park is criss-crossed with a variety of hiking trails.  The oasis is watered by four springs that support a large array of vegetation and wildlife, including a few large mammal species.  Much of the park was damaged by a fire in 2005, from which it is currently recovering.

There are a number of caves in the Ein Gedi area, including those which sheltered David and his men.  They were also apparently used as a hideout for the Jews during the Bar Kokhba Revolt, and recent archaeological expeditions have recovered artifacts and letters from that 2nd century AD.  Also in the reserve is the Ein Gedi National Antiquities Park, which includes the ruins of an ancient Jewish settlement and synagogue.

The Ein Gedi reserve is located on the coast of the Dead Sea, approximately twenty-five miles southeast of Jerusalem.  It is run by the Israeli National Park Service and is open daily from 8:00am-5:00pm (shorter hours in the winter).  The cost of admission is NIS23 for adults, NIS12 for children.  Web: www.parks.org.il (official website of the Israeli National Parks Service)

The Ein Gedi Kibbutz near the national park is home to the internationally acclaimed Ein Gedi Botanical Garden, which showcases the regional flora and fauna.