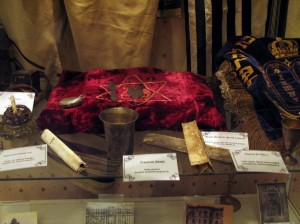 Religious Objects on Display at Jewish Museum of Odessa (www.odessa.ua)

The Jewish people have suffered the persecutions of their neighbors ever since the beginning of the great Diaspora.  However, it wasn’t until the 19th century in Russia when organized anti-Semitic activity was raised to a new level in the form of the Pogrom.  Russia, whose expansive territories not only had one of the largest Jewish populations in the world but also one of the most repressive regimes, began systematic persecutions of the Jews as early as the 1600s.  But the first true government-organized pogrom took place in 1821 in Odessa.  Over the next century, Odessa was ground-zero for anti-Semitism in Russia, during which time a half-dozen major and countless minor pogroms were aimed at the Jews of the city.  This bloody history is recounted and memorialized at the Odessa Museum of Jewish History.

Odessa had long been a magnet for Jewish immigrants.  The earliest Jews likely came here fleeing from the Byzantine Empire in the early Middle Ages.  In subsequent centuries, its relative isolation from many of Europe’s most anti-Semitic regimes made it an ideal haven for the Jews.  Throughout the centuries of the Romanov dynasty, Odessa boasted Russia’s largest Jewish population, possibly the second largest as a percentage of any single city in Europe after Thessalonika.  Perhaps as many as a third of the city’s residents at the outset of the 19th century were Jewish.  When anti-Semitism began to grow inside the Russian Empire, Odessa became a natural target for the ire of the Tsars.

In 1821, the Greek territories of the Ottoman Empire were in a state of unrest.  The Ottoman Sultan blamed the unrest on the popular Gregory V, Patriarch of the Eastern Orthodox Church.  Immediately following Easter services of that year, the Patriarch was arrested and put to death by hanging.  The Orthodox Christians of Odessa, the closest major city in Russia to Istanbul, were among the first to hear the news.  Because there were no Muslims in Odessa, the Christians of the city instead vented their anger on the Jews, who were considered to be accomplices of the hated Ottomans.  In the ensuing violence, the first true Pogrom in Russia, fourteen Jews were killed and millions of dollars of damage were done to Jewish property.

Over the next century, other pogroms broke out periodically in Odessa, notably in 1859 and 1871.  The next big demonstration took place in 1881 following the assassination of Tsar Alexander II.  The assassination, which did have one Jew among its conspirators, was blamed wholly on the Jews.  Massive persecutions and riots broke out throughout the Russian Empire, and naturally the Jews of Odessa were among those who suffered the most.  It was this pogrom more than any other event that triggered the beginning of massive Jewish emigration from Russia to the United States.

The worst, however, was yet to come.  In 1905, Odessa was the scene of the first major stirrings of the Russian Revolution.  The Battleship Potemkin, which had been seized by mutinous sailors, made port in Odessa.  Their mutiny spread to the general citizenry, who were soon up in arms against the oppressive regime of the Tsar.  The rebellion was quickly dispersed, however, and the government directed its anger against the usual suspects.  In the pogrom which ensued, it is estimated that between two and three thousand Jews were killed.  Of course, all of these horrors paled beside the atrocities unleashed on Odessa’s Jewish population during the Holocaust a few decades later.

At its height in the early 20th century, the Jewish population of Odessa was the fourth highest in the world after New York City, Thessalonika and Warsaw.  Despite all of the horrors that followed during the Nazi and Communist eras, the city still boasts a relatively large Jewish community.  Much of the city reflects this considerable Jewish influence, and it is still possible to stroll around the old Jewish neighborhoods to get a feel for what Eastern European Jewish life was like at the turn of the century.

In 2002, the local Jewish community opened a Museum of Jewish History, which chronicles the history and culture of the Jews of Odessa.  Among the exhibits are commemorations of the community’s bloodier past, including both the Holocaust and Pogrom of 1905.

The Odessa Jewish Museum is located in the Jewish district of Odessa, over two-hundred miles south of Kiev along the northern coast of the Black Sea.  The museum is open Mondays through Thursdays from 1:00pm-7:00pm; and Sundays from 10:00am–4:00pm.  Web: www.odessa.ua/museums (official website of Odessa museums)

Despite the destruction unleashed on the Jewish community of Odessa throughout the 20th century, a surprising number of Jewish sites have survived.  Among the surviving synagogues is the old Butcher’s Synagogue which now houses the Odessa Society of Jewish Culture.