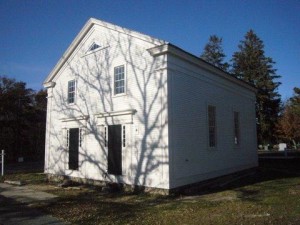 The Old Indian Meeting House is the oldest Native American Christian Church in the United States, as well as one of the oldest churches in America still in use.  Constructed for the use of the Wampanoag tribe in the 17th century, it was not only the first center of Native American Christianity but also, sadly, the center around which the Wampanoag tribe regrouped after their disastrous losses during King Philip’s War.  Finally, it is also one of the oldest and most historic buildings on Cape Cod, and one of the most popular sites of interest there.

The Wampanoags were among the first Native American tribesmen that European settlers made contact with in what later became known as New England.  Throughout the first half of the 17th century, relations between the Puritans and Wampanoags were nominal, although cultural problems increased as the number of Christian settlers grew. 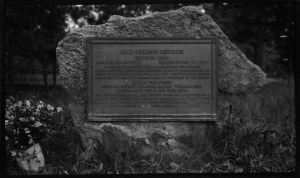 The problem was solved, to some extent, by the conversion of many of the Indians to Christianity.  This was fairly successful, and through the 1650s and 1660s many of the Wampanoags converted to Christianity, although they maintained many of their own customs, thereby developing a unique hybrid form of religion that did not always sit well with the Puritans.

In 1675, these issues as well as others led to a full outbreak of hostilities between the Native American tribes of New England and the Puritan settlers in what became known as King Philip’s War.  The war was a terrible defeat for the local population, and almost the entire Wampanoag tribe was annihilated.  The handful of survivors were largely relocated to Cape Cod, where they settled at Mashpee.

By the early 1680s these survivors had largely accepted to Christianity, mostly out of necessity.  At Mashpee they constructed a church, later known as the Old Indian Meeting House.  This church was not only the spiritual center of the four hundred or so Wampanoag survivors, but also the center of their self-governing community until the end of the American Revolution.  The church was rededicated in 1923, and is still in use by the tribe.

The Old Indian Meeting House was constructed in 1684.  It replaced an earlier church which had been destroyed during King Philip’s War.  It was remodeled and relocated to its current site in 1717.  The oldest building on Cape Cod, it is one of the best surviving examples of 17th century colonial church architecture.  A small, simple white structure, from its exterior it appears to be little more than a two-story house.  Only the surrounding cemetery gives any idea of the building’s use from the outside.

The church interior is very small, but full of interesting architectural details.  The white-washed walls are framed by exposed wooden columns and beams.  There is a small pulpit, small choir box and even a small organ.  The closely packed pews can seat a surprising number of congregants.  However, much of the church interior dates from a very recent renovation.

The Old Indian Meeting House is located approximately ten miles west of Hyannis and fifty miles south of Boston.  Although located amidst suburban sprawl and vacation rentals, the immediate vicinity of the church consists of a large, undeveloped wooden area, especially to the west, that recalls an earlier time for the local population.  As of this writing no visitor information was available.  Web: http://www.mashpeewampanoagtribe.com/meetinghouse (official tourism website of Mashpee).

Cape Cod played a small role in the story of the Mayflower and the Pilgrims.  It was at Provincetown Harbor where the Puritans made first landfall, and where they spoke their first prayers of thanks in the New World.