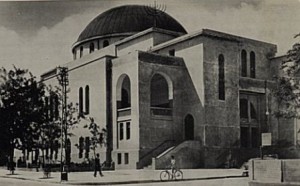 The city of Tel Aviv, an outgrowth of the ancient port of Jaffa, is the modern-day financial and diplomatic capital of Israel.  Home of the nation’s busiest airport, it is the world’s gateway to Israel, and the first city most pilgrims see when visiting the Holy Land.  Despite its size and importance, Tel Aviv is barely a century old.  However, it boasts some of the modern state of Israel’s earliest sites, including beautiful old Jewish neighborhoods and architectural treasures.  Among these is the Great Synagogue of Tel Aviv, the first major new synagogue in modern Israel and, until the completion of the Great Synagogue in Jerusalem, the largest.  Parts of early Tel Aviv are now incorporated into the White City of Tel Aviv UNESCO World Heritage Site.

The history of the modern city of Tel Aviv has its humble origins in the ancient city of Jaffa.  Jaffa, the chief port city of ancient Israel, was the site of a number of Biblical events, including being the jumping-off point for Jonah’s ill-fated voyage.  Largely abandoned by Jews during the Diaspora, it was nevertheless an important transit point for Jews visiting the Holy Land.  In the mid-19th century, Jaffa became a natural drawing point for European Jews imigrating to Palestine.  By the early 1900s Jaffa had one of the largest Jewish populations in the Middle East.

The city of Tel Aviv began as the tiny suburb of Neve Tzedek on the north side of Jaffa in the late 19th century.  In 1909 Tel Aviv was formally organized as an independent municipality, with its Jewish residents intending on making it a beautiful garden in the desert.  The population of the new city swelled to over thirty thousand in the mid-1920s when many Jews were forcibly ejected from Jaffa.  It rose dramatically again in the 1930s when many Jews sought desparately to escape the storm in Central Europe.

By the outset of the war, Tel Aviv’s Jewish population had risen to over a hundred and fifty thousand.  By the time Israel achieved independence, Tel Aviv was the new nation’s largest Jewish city, and for a few years served as the capital.  While the government later moved to Jerusalem, many of the city’s other major governmental and cultural institutions did not, preferring to remain in the more modern and secular Tel Aviv.  As Israel’s major port of entry and financial center, Tel Aviv has since grown into Israel’s richest and most cosmopolitan city.

The old Jewish neighborhoods of Jaffa and Tel Aviv are unique among Israel’s cities.  Since most other places in the country either date from ancient times or from after World War II, Tel Aviv offers an almost exclusive glance at what Jewish life was like in Israel in the late 19th and early 20th centuries.  Among the city’s architectural treasures is the Great Synagogue, the first major synagogue built in modern Israel, and for many years the largest synagogue in the Middle East.

The neighborhoods of Old Tel Aviv and Jaffa are rich in architectural treasures, best enjoyed on foot.  The oldest is that of Jaffa proper, where one of modern Israel’s earliest Jewish communities first prospered.  It is a maze of narrow alleyways and medieval buildings that evoke both the Jewish and Arab past.  About a mile to the northeast is the oldest part of Tel Aviv, home to the city’s Great Synagogue, as well as the labyrinthine Yemenite quarter.  Barely another half mile to the north is Dizengoff Square at the heart of one of Tel Aviv’s most famous old neighborhoods, the White City.  A bit younger than the Great Synagogue district, most of its buildings date no earlier than the 1930s.  However, so unique and stunning is the architecture of the White City that the United Nations has designated it as a World Heritage Site.

The construction of Tel Aviv’s Great Synagogue in 1926 was, in many ways, an unofficial declaration to the world that the Jews were in Palestine to stay.  Until the Belz Great Synagogue was completed in Jerusalem, the Great Synagogue of Tel Aviv was the largest in Israel.  The great dome-crowned exterior of the synagogue is impressive, if a bit plain.  The interior is famous for its stained glass windows which were remodeled in the 1970s in tribute to the many synagogues that were destroyed during the Holocaust.

The old neighborhoods of Tel Aviv are spread out on the south side of the city, with the White City located closer to the modern center.  These neighborhoods are all open sites and walkable, though tours are available.  The Great Synagogue is open Sundays through Fridays from 10:00am-5:00pm, and Saturdays from 7:30am-11:30am.  There is no cost of admission.  Web: www.visit-tlv.com (official tourism website of Tel Aviv)