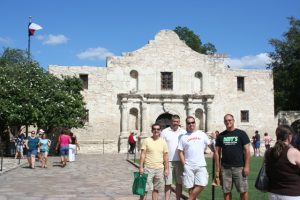 In part four of the series of oldest churches in every state, we will be exploring the Deep South. This part of the country was settled by a mix of French and Spanish colonists along the Gulf Coast, mostly Catholics, while inland areas attracted settlers from the east, mostly Baptists.  This region would later become known as the Bible Belt due its particularly traditional approach to Christianity.  Here are the fourth eight churches in the series, from Kentucky to Texas.

The Cane Ridge Meetinghouse is believed to be the oldest church still standing in Kentucky.  It was a prominent early frontier church, and it hosted an important revival meeting in the early 19th century.  It was among the earliest churches to be established west of the Alleghany Mountains that is still standing.

The Cane Ridge Meetinghouse is architecturally interesting. From the outside it looks like a large stone structure standing among rolling hills and lush greenery, but this merely conceals the church’s secret.  The stone building is not the church.  Inside its walls is preserved the original log-cabin church, and thanks to this special arrangement, the 1791 structure is incredibly well preserved, including original balcony and pulpit.  There is a small museum on the site.

The Sinking Creek Baptist Church is the oldest church in the state of Tennessee and is home to what is believed to be its oldest congregation.  It is one of only a handful of surviving Protestant churches to have been established outside of the original Thirteen Colonies prior to the American Revolution.

The Sinking Creek Baptist Church is one of the finest surviving log churches in the in the United States. Although much of the church was restored in 1965, it looks more or less exactly the way it did in the 18th century.

The Indian Springs Baptist Church is believed to be the oldest church building standing in the state of Alabama.  Although moved from its original location, the structure itself is one of the oldest, most completely intact places of worship in the Deep South.

The Indian Springs Baptist Church is a classic, simple white clapboard church of the kind common to the local farming communities in the early 19th century.  It is in an excellent state of preservation.

Woodville Baptist Church is the oldest church building in Mississippi, as well as one of its oldest congregations.  It was one of the founding churches of the Mississippi Baptist Association, and may have been among the first churches in the state to be integrated.

The Woodville Baptist Church may be architecturally unique: a red brick building with a traditional white Neo-Classical façade, replete with columns.

The Cathedral Basilica of St. Louis King of France in New Orleans is the oldest Catholic cathedral in the United States not constructed by the Spanish as well as the oldest in continuous operation, having been active since the 18th century.  It is also among the earliest to be designated as a basilica.  The cathedral is renowned for its resilience in the face of numerous disasters, both natural and man-made, that have plagued it over the last two centuries.

The Cathedral of St. Louis bears the look of its French heritage with Spanish influences. Its massive, brilliant white façade dominates Jackson Square, and is one of the few cathedrals in America to overlook a major city square.  Its triple blue steeples look less like those of a church and more like those of a fairy-tale castle.  The cathedral’s interior is huge and ornate and is home to a towering marble altar which would not be out of place in the great churches of Europe.  Many important members of the early New Orleans community are buried in the cathedral’s cemetery, including, oddly, Marie Laveau, a renowned local practitioner of voodoo.

The Smyrna Methodist Church is a classic example of the traditional American frontier church, replete with a rare exposed bell tower. The tiny interior is minimally decorated and finished, contributing to the building’s 19th century feel.

Wheelock Mission Church is the oldest standing church in the state of Oklahoma.  It was founded as an unaffiliated institution with the purpose of serving the local Choctaw community.  The neighboring Wheelock Academy was a prominent educational facility for the teaching of Native American girls.

The Wheelock Mission Church is a small, simple stone-built church that is little changed from its initial construction in 1846. It is one of the oldest surviving stone buildings in Oklahoma.  Also on the premises are the surviving buildings of the Wheelock Academy, dating back to the 1880s.

The Mission San Antonio de Valero in San Antonio is by far the most famous Catholic mission in America, and undoubtedly the most beloved historic site in the state of Texas. Better known as the Alamo Mission of San Antonio, or simply the Alamo, this early Spanish church was the site of one of the most famous battles in American (or at the time, Texas) history.  In the 1830s the old mission was put to use as a garrison for Texans seeking independence from the Empire of Mexico, and was subsequently the location of the most famous siege ever to take place on American soil.  Although long since decommissioned as an active church, the Alamo is the number one historic site in Texas, receiving millions of visitors annually.

The Alamo site includes the restored 1744 church and other buildings from the original mission. Much of the Alamo’s military features, which were added in stages in the early 19th century, have also been restored.  These include large portions of the walls, casements, and a number of cannon on display.  The mission buildings, including the church, are now given over mostly to use as a museum which houses exhibits on the early days of the mission, its subsequent history, and of course, the Texas Revolution.  Scattered around the site are various memorials to those who fought and died here, as well as to the Daughters of the Republic of Texas, who were instrumental in saving and restoring the mission.