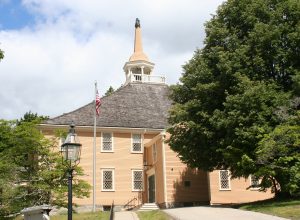 So this week The Complete Pilgrim is starting a six week series profiling the oldest church in every American state. In part one, the Northeast will be explored.  Because this region includes New England and New York, many of the very oldest standing churches in the United States can be found here, especially around Boston.  Here are the first nine churches in the series, from Maine to Pennsylvania.

The bell tower, once crowned with a tall steeple, is now topped with a small dome, which is highly unusual for the architecture of the period. A Revere Bell, dated 1823, can be found in the tower.  The church property also includes the parsonage house, completed in 1929, and the Old Burying Ground, where John Newmarch and William Whipple (father of William Whipple, signer of the Declaration of Independence) are interred.  One epitaph in the graveyard is attributed to Robert Browning.

The Newington Town Church is the oldest church in New Hampshire, as well as one of the oldest standing buildings in America north of Massachusetts.  It was likely completed in or around 1717.  One of the many independent Congregational Churches that dotted New England in the first half of the 18th century, it is currently active as part of the United Church of Christ.  The church and surrounding historic district were added to the National Register of Historic Places in 1987.

The distinctive bell tower lacks a traditional steeple. It houses a bell which was donated to the church by the town of Newington in England (Newington’s namesake).

The Rockingham Meetinghouse, also known as the Old Meetinghouse, is either the oldest or second oldest existing church in Vermont, depending on who you ask.  It was started in 1787 and in use by 1792, but not completed until 1801 (another church was completed earlier but was likely in use later).  Originally a Congregational church, it is now owned by the town of Rockingham and is used for civic and public purposes.  It was listed on the National Register of Historic Places in 1979 and declared a National Historic Landmark in 2000.

Virtually all of the construction elements are believed to be original with the exception of the pulpit. Notably, there is no bell tower of any sort, and the main entrance is located along the long wall of the building.

The interior of the Old Ship Church is a carpenter’s dream come true: a magnificent wood frame and beam masterpiece that resembles the interior of a tall ship. It is likely that some of the church interior was designed and built by shipwrights, and it is from this that the Old Ship Church probably received its name.  Among the church’s treasures is a 16th century christening bowl that was brought over from England by the original settlers.  The neighboring Old Ship Burial Ground boasts a number of important early graves, including ancestors of Abraham Lincoln and members of the Revere family.

The Great Friends Meetinghouse in Newport is the oldest church in Rhode Island and one of only a handful of intact places of worship from the 17th century left in New England.  Completed in 1699, it is one of the finest surviving examples of Quaker architecture from the early Colonial era.  It is now maintained as a museum.  It was listed on the National Register of Historic Places in 1968.

The Great Friends Meetinghouse of Newport is not only one of the oldest and best preserved meetinghouses in New England, it is possibly the largest colonial-era meeting house of any denomination in America. Expanded on at least four occasions, the large two-story wood frame structure boasts a magnificent hall that runs most of its length.

The Abington Congregational Church in Pomfret is the oldest existing church in Connecticut, as well as the state’s oldest church building in continuous use.  The current building was completed in 1751.  Originally established as an independent Congregational Church, it has been part of the United Church of Christ since the mid-20th century.  The church building was added to the National Register of Historic Places in 1977.

The Abington Church is crowned by a bell tower over its entrance but, oddly, not a steeple, which is highly unusual for the architecture of the period.

The Old Quaker Meetinghouse in Flushing is the oldest Quaker meetinghouse still in use as well as the oldest religious structure still standing within the five boroughs of New York City.  Although there were expansions and renovations in later years, the original core of the building dates from 1694.  It was designated a National Historic Landmark in 1967 and a New York City Landmark in 1970.

The Old Quaker Meetinghouse is one of the oldest buildings still standing in New York City. The church is currently in need of significant repairs, but as of this writing work was on hold due to bureaucratic problems.  The meetinghouse also has a graveyard full of unmarked graves, possibly including that of its founder John Bowne.

St. Mary’s Episcopal Church is the oldest Episcopal church still standing in New Jersey.  Built in 1703, it is also known as Old St. Mary’s, to distinguish it from the New St. Mary’s Church which was completed in 1854.  Old St. Mary’s is still owned and maintained by the St. Mary’s congregation.  The two churches are neighbors and share a graveyard where a number of prominent people are buried.  St. Mary’s was listed on the National Register of Historic Places in 1972 and designated a National Historic Landmark in 1972.

Old St. Mary’s Church does not look like a church that is over three hundred years old. This is due in part to the excellent upkeep, renovations and layout which make it look like a much more recent building.  Originally designed by Richard Upjohn, it is believed to be the oldest cruciform church in America.  The neighboring cemetery boasts a number of burials of interest.  In addition to Elias Boudinot, there is William Bradford, America’s second attorney general, two governors, three United States senators, two congressmen, several Episcopal bishops and Franklin D’Olier, who founded the American Legion.

Gloria Dei Church of Philadelphia, also known as Old Swedes Church (a nickname it shares with Holy Trinity Church in Wilmington, Delaware and a number of other churches in the area) is the oldest standing church in Pennsylvania and the second oldest Lutheran church in the United States.  It is also the oldest brick structure in the city of Philadelphia.  Now an Episcopal church, it is also part of Independence National Historic Park.  In 1942 it was designated as a National Historic Landmark, awarded a Pennsylvania State Historic Marker in 1954 and was added to the National Register of Historic Places in 1966.

Old Swedes Church is one of the oldest surviving buildings in Philadelphia and possibly its best preserved early 18th century structure.  It is home to a small collection of rare early Bibles in Swedish.  John Hanson, ninth president of the Continental Congress, is buried in the church graveyard.